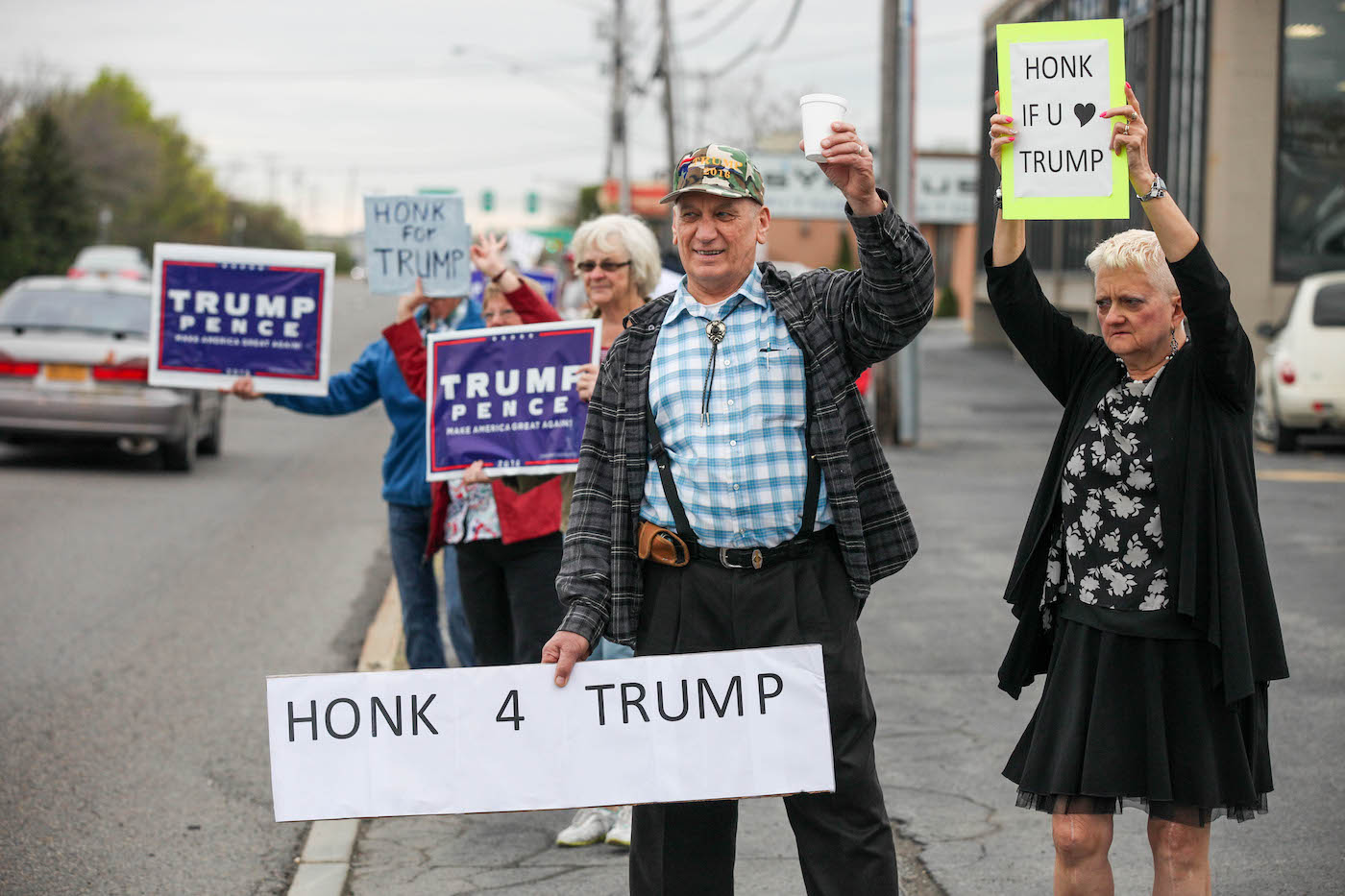 During Syracuse’s pro-Trump rally Saturday, April 30, a little boy walked onto Erie Boulevard East at Onondaga County Republican Headquarters. “That’s why we gotta build walls: prime example,” Donald Trump impersonator Corey Kinsella said as a woman warned the boy about traffic. “I love the little people, so many little people who support me,” the impersonator said with a pretty convincing Trump (and Alec Baldwin) delivery.

“We’re thrilled and excited by all Trump has accomplished,” said Randy Potter, regional director for Central New Yorkers for Trump, which organized the event to mark the 100th day of Trump’s presidency.

Among Trump’s successes, according to Potter: strengthening the United States’ world leadership, standing up to Syria after the chemical attack, and starting his promised wall between the United States and Mexico. Potter conceded that Trump “didn’t get the money” yet to build the wall, but he said the president had clear plans for the project. “The first health care bill was not too great,” he added. “I think the next will pass.” But his faith in Trump “is firm,” he said. “Folks know Trump means business.”

Sue Falco of Syracuse agreed that Trump “is doing an amazing job.” He “gives me hope that no matter what happens, you can be successful even if many people are against you,” she said. The press and Congress are “totally against him” she said.

Falco’s top issue? “I love that he supports women and pays women equal pay and listens to Ivanka on women’s issues like daycare,” she said.

She also said the recording in which Trump bragged about forcing himself on women has been taken out of context. “He appeared to be talking about women who allow people to treat them like that,” she said. “To say he doesn’t support women is ridiculous.”

Potter put the Republican headquarters crowd at 50; the Syracuse New Times counted no more than 25 people protesting between 10 and 11 a.m. He’s not impressed by the large turnouts at recent anti-Trump events. “Are they energized? Perhaps,” he said. “Their decibel level is very high. We are the silent majority.”

About the same time, hundreds of people were lining up in Syracuse’s Franklin Square for the People’s Climate March. The local event was among 250 marches worldwide in response to Trump’s proposals to cut climate change programs, roll back environmental regulations and cut programs and staff at the Environmental Protection Agency.

More than 1,000 people marched, according to organizers who used clickers to count participants. Later, about 600 listened to speeches and music or visited exhibits, vendors and food trucks at the Inner Harbor. “Climate change is not a hoax,” marchers chanted. She hesitated before identifying herself. A native of Jamaica, she became a citizen last month and fears that Trump’s rhetoric and policies on immigrants could harm her family. “It’s been very difficult since the election,” she said. “There’s so much racism.”

Timothy Joseph came to the march with his daughter, wife and sister. “I didn’t vote for Hillary (Clinton), but I don’t like Trump, either,” he said. Joseph runs a cattle farm in Weedsport.

“I certainly don’t want him opening up the national parks and monuments for drilling,” Joseph said. “It pulls a lot of chemicals out of the Earth.” Besides, he added, “I just love big old trees.”

He and his 11-year-old daughter, Eva, are planning a monthlong trip this summer to visit national parks. She’s very concerned about the environment. “I want the world to be good for my children and grandchildren,” she said.

Freida Jacques, an Onondaga Nation clan mother, thanked the crowd for their concern for cleaning up the Earth. “All of life is dependent on fresh water, and if it goes away we’re in big trouble,” she said.

“Climate change might be the biggest threat to the planet,” said Peter F. Cannavò, a Hamilton College professor who directs the school’s environmental studies program. “All of Donald’s bluster cannot wish it away. We need to build wind farms, not walls.”

The Climate March drew a diverse crowd, with participants carrying signs supporting a wide variety of causes. By 1 p.m., about half the marchers remained, listening to speakers and chatting.

At the Trump rally, participants held “Honk for Trump” signs. Some motorists obliged. Others shared a middle finger salute. “You’re ruining the fucking country, you stupid morons,” a woman driving a red car yelled about 11 a.m. “Why are people so rude?” a Trump supporter asked.