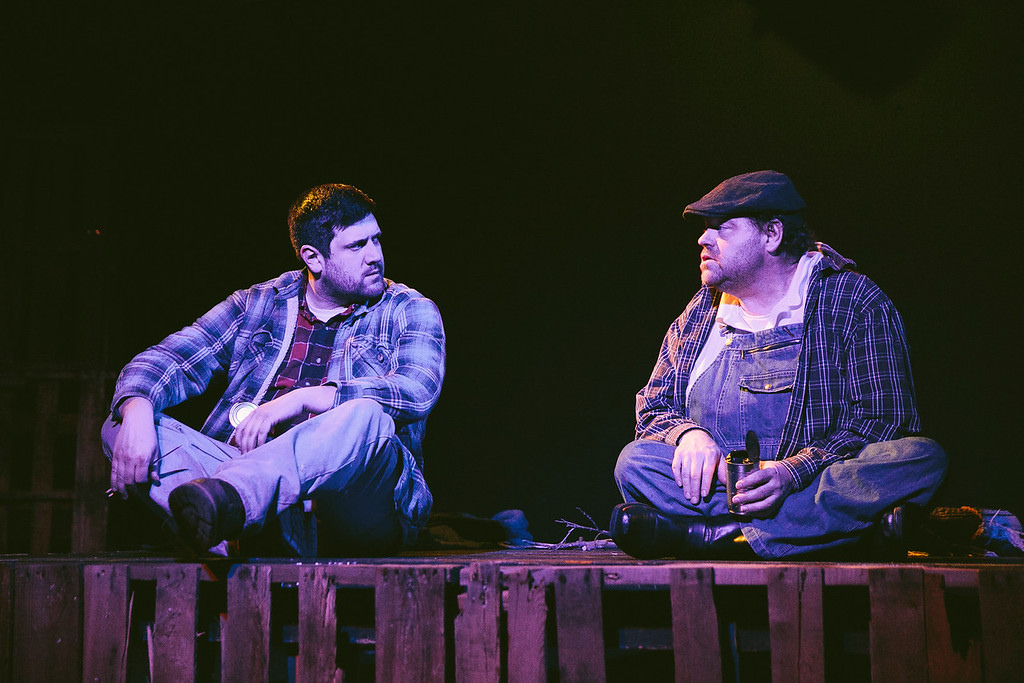 Some actors serve long apprenticeships waiting for the right role. Tall gentle giant Phil Brady was a shambling, amiable but distinctive presence in countless small roles over the years. Holder of a bachelor’s degree in theater from Nazareth College, he seemed unaffected by vanity but was always on his mark when cast.

Of the 26 cast members in last December’s It’s a Wonderful Life at Shoppingtown’s Central New York Playhouse, Brady’s name was cited 25th as Mr. Welch, after Zuzu Bailey, the little ginger snap. Fledgling director Kasey Marie Polly saw within the balding, red-haired persona the makings of a heartbreaking Lennie in Of Mice and Men. In this production, running through March 25, Brady takes flight.

The first act of courage for Polly (previously known as Kasey Marie McHale) was to assert that two generations of Of Mice and Men as an assigned reading chore for a zillion term papers could not beat the juice out of the drama. Nobel laureate John Steinbeck wrote the novella and the stage play (his only such venture) at the same time, 1937, a rare instance of one author achieving simultaneous success in both genres. The author drew from his experiences as a farm worker, or bindlestiff, in California about 10 years earlier, before the Okies arrived, and the bunkhouse was ethnically homogeneous, with one black man.

Along with Brady, Polly has cast company regular Dan Rowlands as George Milton, Lennie’s articulate and protective pal. When Rowlands was getting started as a director about eight years ago, he flourished at the kind of effort Kasey Polly is working at: bringing to life terrific plays that others have dismissed as shopworn.

He’s bigger than many other Georges, often wily little guys to offset Lennie’s bulk; think Burgess Meredith in the 1939 movie, or Gary Sinise in the 1992 version. Rowlands is also louder and more pugnacious than other Georges, which superbly complements Brady’s gentler, almost angelic Lennie.

For the other eight people who pass through the bunkhouse, director Polly has cast a judicious mix of reliable regulars and necessary newcomers. The late Arthur Storch, founder of Syracuse Stage, loved Of Mice and Men and directed it twice during his tenure, thinking it a pinnacle of 1930s-era theater, especially in the portrayal of working men. Keith Arlington has never been better than as the hapless, aging one-armed Candy, all alone except for his nearly dead malodorous dog.

Especially impressive is David Simmons (a Syracuse New Times’ Syracuse Area Live Theater award winner) as Slim, the most respected of the other workers and a natural leader. Always one of the most scrupulous of players, Simmons allows Slim to signal subtly that he understands fully what the relationship is between George and Lennie and how they need the chimerical fantasy that they can get together a few hundred bucks, build a place of their own, and live off the “fat of the land.” Candy buys into this, too, and gladly casts in his life’s savings that he could join them.

Then there are the baddies. Dark-browed Tyler Ianuzi makes Curley, the boss’ son with a Napoleon complex, an electrifying villain, a coward with the demeanor of a bully. His disruption of the men’s card-playing sizzles. Derek Potocki directs the fight choreography that allows Lennie to disable the brutish Curley.

This initially makes Curley’s Wife (we hear no name) initially sympathetic as a victim tethered to a tiresome miscreant in the boonies while she dreams of Hollywood. But lovely Jennie Russo shows us they’re a matched pair. Russo, last seen as the naughty nurse in The Sunshine Boys, flatters herself that she can awaken a fiery libido in placid Lennie.

One relatively new face points up the theme of the entire drama: the dread of loneliness. Donovan Standfield’s superb Crooks, the sole black man around, is shunned by the rest for his color, and lives in tidy isolation, surrounded by books, the only would-be intellectual of the lot. He has immediate empathy for Lennie and demonstrates even deeper perception than does Slim. Standfield gives him eloquence.

Every aspect of this production marks Of Mice and Men as a labor of love, starting with the sturdy set made of rough-hewn barnwood but light enough to spin on casters. Hefty men sleep in these bunks, but we see who’s approaching through the slits. Director Polly hammered this together with her husband Justin, Dan Rowlands and Chris Lupia.

Phil Brady will suffer one negative from this performance: He can never again just blend into a crowd scene.