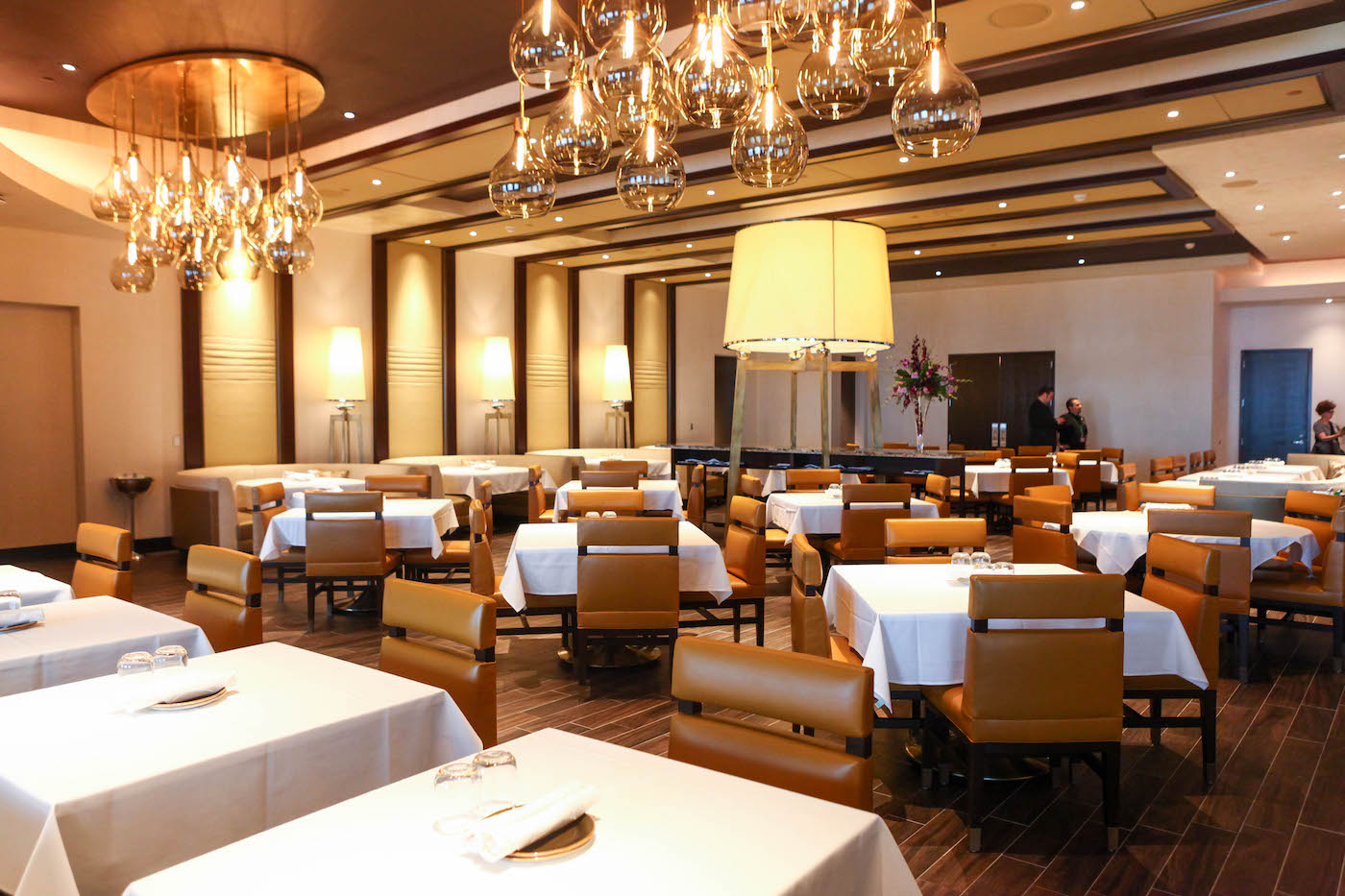 Chef Fabio Viviani’s name is on a line of California wines, a collection of cookware and a series of best-selling cookbooks. The Italian import, who gained popularity during the fifth season of Bravo’s Top Chef, also owns or co-owns more than a dozen restaurants inspired by his native country, in cities including Cleveland, Chicago and San Diego.

Portico brings a chic, sophisticated vibe to the new casino still taking shape in the Finger Lakes countryside. The way Viviani sees it, dinner at Portico is sure to be a winning proposition. “What people can expect here is great hospitality and a great dining experience, inspired by the regionality of the Finger Lakes,” Viviani said at the Feb. 23 opening of the elegant Portico. “I’m honored and humbled in being here.”

Viviani, a native of Florence, has been cooking in restaurant kitchens since he was a child. He describes Portico as part Italian-Mediterranean bistro and part American steakhouse, with an emphasis on scratch cooking. Breads, pastas and desserts are made in-house and prime steak is aged on site.

It’s definitely not a “red sauce Italian” restaurant: Appetizers include one of Viviani’s favorite things, a platter of coccoli (beignet-style pastry puffs, filled with cheese and prosciutto), served warm, oozing cheese and with a hint of sweetness, thanks to a drizzle of truffle honey. Other appetizers include charred octopus, Kobe meatballs and a smoked pheasant salad.

Pasta offerings include gnocchi, cannelloni, classic Bolognese with fettuccine, truffle Rock Shrimp macaroni and cheese and a signature Viviani dish: creamy rigatoni carbonara, frothed in a jar at the table for a memorable presentation. Entrees include steaks, chops, sea bass and, for those craving comfort food, Nona’s meatloaf.

Plan on spending $12 to $18 for a plate of pasta, $20 to $40 for an entree and $30 to $75 or more for one of the prime cuts, plus extra for side dishes. Desserts include everything from humble apple pie to Limoncello cake to bomboloni, an Italian doughnut served with your choice of sauces.

Those on a mission to snap a selfie with Viviani or have him autograph a menu are rolling the dice: The Chicago-based celebrity chef says he will be at Portico only as needed, for weeklong stretches in the beginning, then probably once a month for a day or two. “I give everything the time it needs to make sure a restaurant is running smoothly, then whoever needs the most gets the most,” he says. “I have a great kitchen and staff here.” Executive chef Don Agate has been tapped to manage the day-to-day operations. Agate, a native of Cortland, got his start in the restaurant business as a dishwasher at the Glen Haven Hotel, a seasonal restaurant on the southern end of Skaneateles Lake.

Agate, who lives in Skaneateles, said he was drawn to Portico by chef Fabio and his passion for fine food, for the opportunity to contribute to a higher-end restaurant concept at a casino and for Portico’s focus on the Finger Lakes culinary bounty.

It’s a challenge to be local this time of year, Agate says, but Portico is using a variety of cheeses from Muranda Cheese Company, in Waterloo; local kale in its kale Caesar; local apples in its crumble-topped apple pie; and local lamb for the lamb porterhouse. The arugula in the burrata Caprese is local. In a few months, the tomatoes will be, too.

“At the end of the day, we’re at the tail end of winter,” Agate says. “Once we get in season, you’re going to see local all over the menu.”

Portico by Fabio Viviani serves dinner daily, starting at 5:30 p.m., with eventual plans to offer lunch and brunch. For information and reservations, call 946-1780, or visit dellagoresort.com/dining/porticobyfabioviviani.

The Farmers Market Buffet has been drawing long lines and full houses for all-you-can-eat lunch and dinner, with breakfast on Saturdays and Sundays. The buffet features a wide selection of items with a focus on local produce, dairy and other ingredients. Visit dellagoresort.com/dining/buffet.

The Centrifico bar that overlooks the gaming floor features craft cocktails and a menu of salads, burgers, sandwiches and more. Visit dellagoresort.com/dining/centrifico.

And the casino’s food court features Tex-Mex at Moe’s Southwestern Grill; pizzas, calzones and more from local favorite Ciccino’s; and burgers and other comfort food at Smashburger.

Note: Guests must be 21 to dine at many of del Lago’s restaurants. For complete information, visit dellagoresort.com/dining.