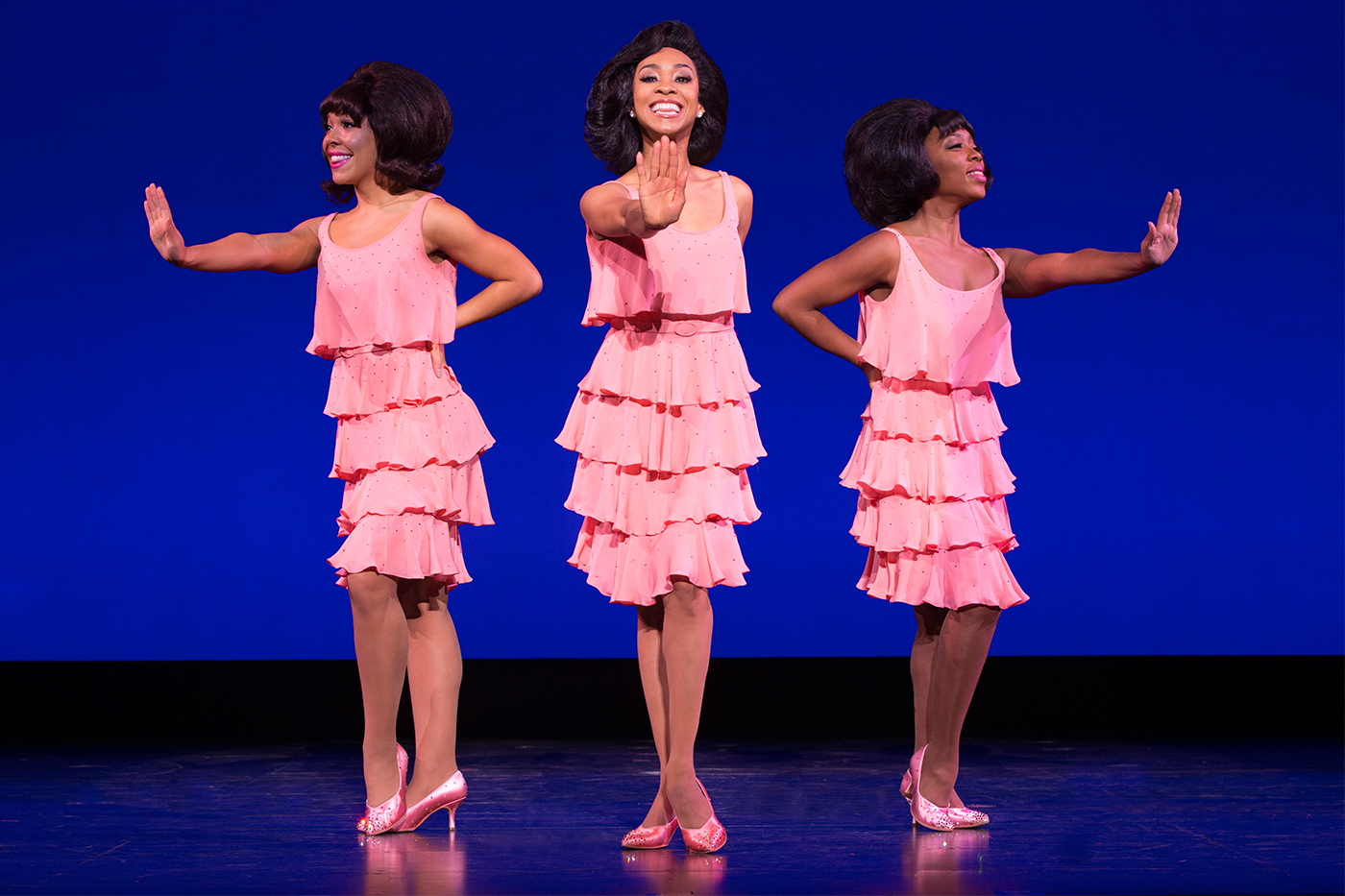 CNY-influenced actors describe their portrayals of music icons in “Motown.”

The soulful Motown: The Musical will be the final production of the 2016-2017 season of Famous Artists/NAC Entertainment’s Broadway in Syracuse series. The jukebox musical offers a quasi-biography of Motown Records founder Berry Gordy and the array of musicians who recorded with his label.

Taking on the role of Florence Ballard from The Supremes is Gabriella Whiting, 22, a 2012 graduate of Skaneateles High School. She now resides in Manhattan and is taking on various musical-related roles. Whiting’s last name may also ring a bell with Syracuse music fans: She is the niece of local rocker Joe Whiting.

“I grew up with it,” she remarked about her lineage. “He was the uncle who was an active musician. I never thought twice about it.”

The two performers were on their Grand Rapids leg of the national tour when they chatted with the Syracuse New Times.

Is this your first time on a national tour?

Gabriella Whiting: I worked on a Norwegian cruise ship back in 2013, for Legally Blonde: The Musical. That was my first traveling production. I’ve worked at a variety of different regional theaters across the country.

David Kaverman: I worked for Disney Cruiselines. They have really big ships, so it was hard to tell that you were out on the water. Except when there were storms, because the boat would rock.

Do you prefer to be on land or out at sea?

Gabriella: It’s definitely different. On a cruise ship, you’re secluded from society. It’s its own little bubble. When on land, there is a little bit of a bubble, but you’re touring the United States. It’s much easier to make phone calls. I couldn’t call my mom while I was on a ship.

David: When you’re on the boat, you’re limited with communication. For six months at a time, you don’t set foot on land at night. When you’re performing out at sea, you can settle in your room for the night. With Motown, you’re picking up and traveling every week. It’s a little tedious, but it keeps it fresh.

Do your parents continue to attend shows?

Gabriella: My mom has come a couple times already. I’m sure she’ll come to our shows in Syracuse. She’s seen me perform in almost every single show I’ve done.

Does that make you nervous if family and friends attend a homecoming show?

Gabriella: It’s not too nerve-wracking. For me, especially performing at the Landmark, there are so many people in the audience. It would be more nerve-wracking if I could see all their faces.

David: They saw the show in Detroit. Since I’m from Ohio, it is the closest place for them to travel to. It doesn’t make me nervous, but I want to do a good job. They’re not very good critics; they like everything I do.

You have to be careful with how you pace yourself. It’s great to have family and friends visit, and you want to hang out with them, but you also have to perform. You want to have enough energy when going on stage.

Talk about your roles a little bit. How’s it to be representing these icons?

Gabriella: I’m playing Florence Ballard, who was one of the original members of The Supremes. I’m also playing Suzanne de Passe, who was Berry Gordy’s artistic director. It’s a huge responsibility. Many of these people are still alive and are coming by to see the shows. We want to do them justice. It’s a great feeling and an opportunity to represent a piece of music and pop culture history.

David: It wasn’t intimidating in the beginning. The only surreal moment I had was when we opened in Los Angeles, because Smokey Robinson was there. I think with any role, you want to do a good job. They’re real people. Luckily, I wasn’t the first person to portray Robinson, so he’s seen some actors portray him. He was very complimentary after the show. Once I got his approval, I felt better.

Were you familiar with the music?

Gabriella: When I was growing up, my mom would play a lot of the music. The thing about Motown music, whether you’re conscious of it or not, you recognize the songs. It’s funny, going out into restaurants, stores or other places, how often the music is played.

David: Consciously and unconsciously. Motown music plays everywhere: movies, elevators, lobbies, television shows. I knew a lot of the songs, but not much as far as the story goes. It’s been great to learn the history of the label.

How did you get involved with Motown: The Musical?

Gabriella: It was actually a really quick process for me, which is shocking. I was able to get an audition, went in, sang and danced. Two days later, I heard that I got the role. I’d never seen the show before, but I researched and got very familiar with the show.

Are you excited to perform on the Landmark stage?

Gabriella: I’m really excited. I grew up performing all types of dance, and ballet was one of them. The last time I performed there, it was for the Moscow Ballet. I was 8 years old. It’s been a while.

David: I’ve gone past it, but I, unfortunately, never had a chance to check out any shows. When I was there, there really wasn’t a dark period in between shows (at the Redhouse).

Did you grow up playing instruments?

Gabriella: No, I was primarily in chorus throughout school.

David: I was really involved in high school. The arts were my jam. I was in orchestra, choir and band. Plus, I had a lot of traveling experiences through those. In college, I played in the pit orchestras, but I always wanted to be one of the actors. In college, that’s when I made that decision.

How do you see arts programs at local schools and in professional spectrums growing?

Gabriella: When I was in high school we had a really good drama program. Since then, it’s seemed to get bigger and bigger. It’s great to see kids express themselves through theater, music and art that may not have been available to them before.

David: I went to a public school, and we had a lot of arts programming. Luckily, many of the arts are showcased on television, like Glee, Dancing with the Stars and So You Think You Can Dance. When schools don’t offer these opportunities, people will look toward their surrounding communities.

The Redhouse has their education fellowship program, where they’re taking the arts to a lot of the schools in the area, and teaching through that. This gave me hope for the city that’s strengthening their education program.

I definitely think children are getting exposed to the arts at an early age. It’s increasing, but we have to make sure it continues.

David, on your website it says you are easily bribed with a gallon of ice cream. What ice cream?

David: There aren’t any flavors I don’t like, except maybe rum raisin. Everything else I’m game for. It’s kind of bad, because I’ll eat it every day.

Gabriella, are you as easily swayed by ice cream?

Do you have any pre- or post-show superstitions?

Gabriella: I don’t really have any superstitions, but I do like to get everywhere super-early. It’s just something I do.

David: I always have Altoids, because I’m paranoid that I’ll have bad breath. So I’ll have them on me before and during the show. I also don’t eat after the show; I’ll go to the hot tub to unwind. I’ll eat during intermission.

What are you excited most about during your return to Central New York?

Gabriella: Since I grew up in Skaneateles, I’m excited for the lake.

David: Syracuse is my home away from home. My contracts with the Redhouse were about two months or so, and we stayed downtown. Everyone I met in Syracuse was so nice, and the city impressed me because I’d never been there before. I made a lot of friends there.

When I was performing with Dreamgirls, we had local high school students in the show. It’s great to show them the business and that with working hard and following your passions, things can work out. I’m excited for them to see the show, to meet up and talk with them.