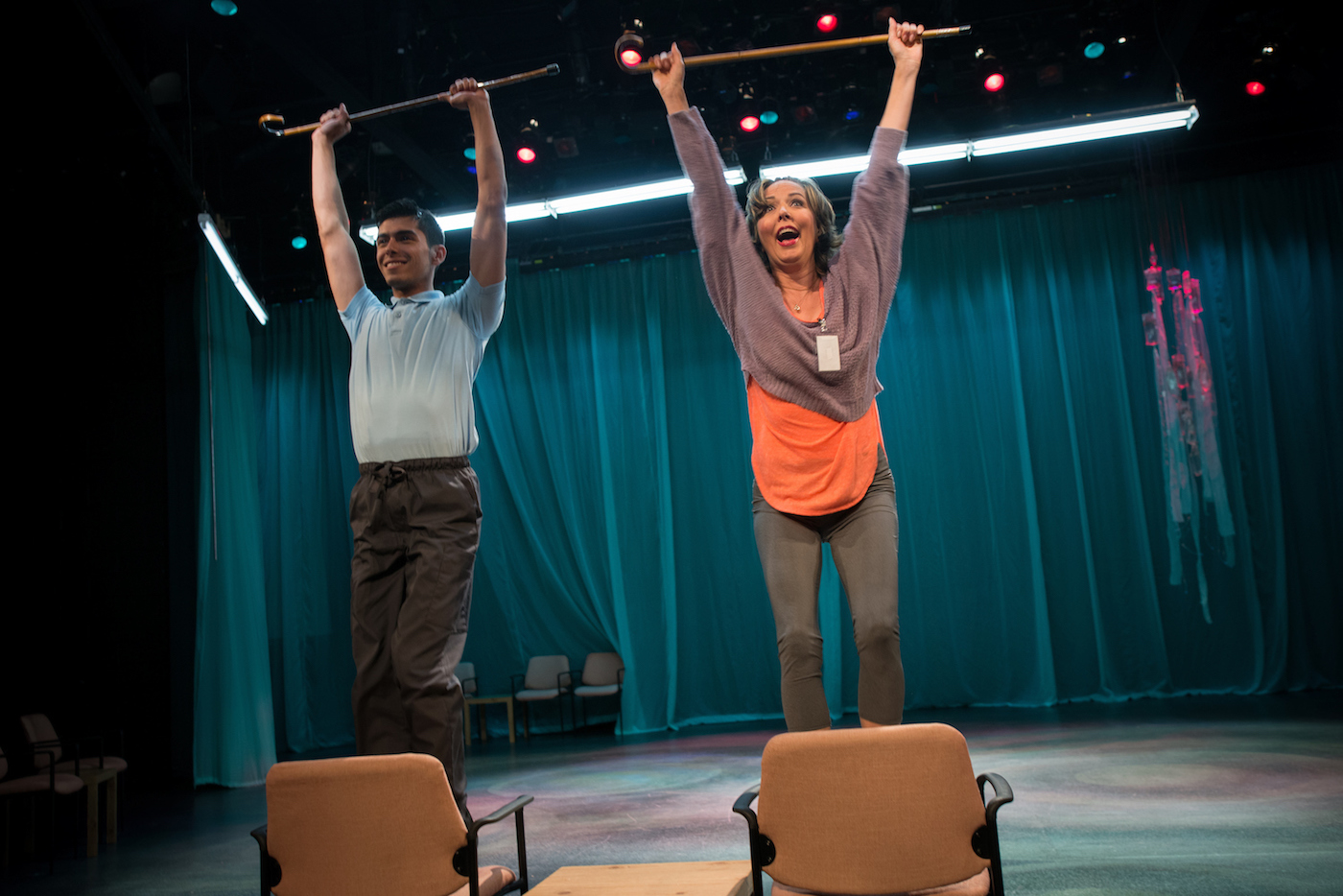 Mimi Quillin’s autobiographical Dégagé makes its world premiere at Ithaca’s Hangar Theatre, running through Saturday, July 29. On a nearly bare stage three players, called A Dancer (Wendy Waring), Man A (Stacy Todd Holt) and Man B (Jose Useche), tell of an artist’s inward journey after encounters with the dying at a hospice in Eastchester, N.Y. The playwright’s words are framed, and interrupted, with dance interludes, to which she inserts disarming moments of gentle humor.

While new to writing for the stage, Quillin brings golden credits as a performer and choreographer, ranging more than three decades. Non-dancing roles include appearances on NBC’s Law and Order. After taking a writing workshop with Paula Vogel (How I Learned to Drive), Quillin penned and performed in Call Fosse at the Minsky, about her work with maestro Bob Fosse in the 1985 revival of Sweet Charity. It was awarded Best Production out of 800 entries at the United Solo Festival in Theatre Row last year.

Closer to home, Quillin choreographed Stephen Sondheim’s A Funny Thing Happened on the Way to the Forum, the Hangar’s preceding production. That was her third collaboration with Michael Barakiva, Hangar’s artistic director. In his heartfelt curtain speech, Barakiva tells how invested and engaged he has felt with Dégagé. He is reviving the tradition of world premieres the Hangar abandoned about 10 years ago.

In her candid program notes, Quillin explains that “having committed the crime of aging,” she was looking for an outlet for her energies when she found an opening for an artist-in-residence at the Calvary Hospice. The people hiring her said that “medicine cures the body, but art heals the spirit.” As previous artists had been diverse photographers and writers, she was encouraged to think up her own assignments, even to give the staff a dance break. At a hospice, however, patients do not expect to walk when they exit. And as Quillin shows, her spirit was the one affected.

As the action begins we hear uptown jazz, what sounds like Duke Ellington. We first see the dancer and the men in silhouette. Although more than 90 percent of Dégagé’s 90 minutes are filled with the spoken word, Quillin wants us to primarily see dance as a double metaphor for life and art. All three performers are themselves dancers, and each can readily break into rhythmic movement as an extension of speech. In one moment all three break into a Russian folk routine.

The dancer relays some of the background about how she happens to be in a hospice, in much less detail. She may use the pronoun “I” but does not identify herself as Quillin. A fictional character, the dancer nonetheless repeats biographical experiences with those of the playwright. She remembers the discouragement of a harassing mother who charged that the daughter was too tall to be a dancer and that her feet were too big. A father who had died years earlier from cancer is remembered more congenially.

As the dancer, Wendy Waring makes an idealized alter-ego. A Broadway veteran, she has specialized in playing tall, gorgeous women, such as Ulla in Mel Brooks’ The Producers. Waring is also a skilled comic: She was the nurse in the doctor skit in Syracuse Stage’s October 1997 production of Neil Simon’s The Sunshine Boys. The years have been kind to her. She can put a gleam on some of Quillin’s less-than-sterling zingers, as when a flamboyant gay man is described as a “dead ringer for Liberace.”

Waring always remains the dancer, so the men must conjure up all the other characters, too many to count. Neither ever changes into a costume. Stacey Todd Holt, a Broadway veteran, is older and bearded, while Jose Useche, a recent Ithaca College graduate, is younger, shorter and more given to physical expression and mime.

Director Barakiva and Holt put out a willing suspension of disbelief to the test when Holt morphs into a series of different women, starting with the dancer’s mother, simply by changing the timber and pitch of his voice. We just have to look past the gray-streaked beard.

Production values matter even in a minimalist show. Necessary props, such as mobile urine bags, arrive so perfectly they almost generate laughter.