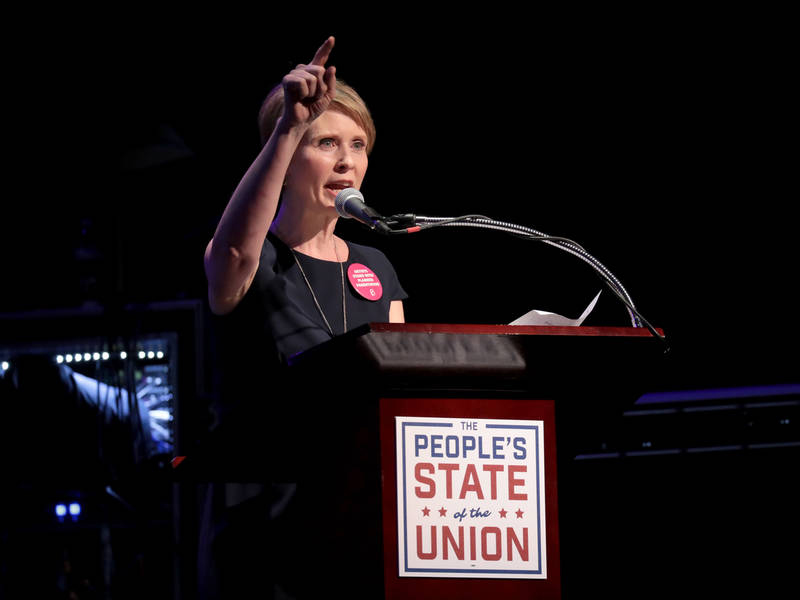 A few weeks ago, Cynthia Nixon was just an actress people knew from the HBO series Sex And the City. Now, she is indirectly transforming the way of New York state politics.

A few weeks ago, Cynthia Nixon was just an actress people knew from the HBO series Sex And the City. Now she is indirectly transforming the way of New York state politics.

Ever since Nixon announced her candidacy for the Democratic nomination for governor on March 18, Gov. Andrew Cuomo has publicly acknowledged her legitimacy little more than he did the last woman to challenge him from the left: Zephyr Teachout in 2014.

After Nixon jumped in the ring, Cuomo called her candidacy part of the “political silly season.” His close ally, Christine Quinn, the former speaker of the New York City Council, called Nixon an “unqualified lesbian.”

While it’s unlikely that Cuomo sees Nixon as a credible threat to his third-term ambitions (a recent Siena College poll had her down more than 40 points), it’s clear that she is a political thorn in his side. And he isn’t taking any chances that this one thorn could cause a political death by a thousand cuts.

Not too unlike a child hastily throwing clothes into his closet to make it appear he has suddenly cleaned his room to fool his parents, the governor has almost overnight been racing to put on a “Mr. Fix-It” image, as he hastily addresses problems that Nixon has mounted her campaign upon.

Besides her acting role, perhaps what Nixon is most known for has been her advocacy for children’s education in the state. Criticizing Cuomo on education funding became her opening line of attack. The governor hit back, saying it wasn’t just how much money was spent, but where it was being spent.

Nonetheless, in the state budget deal reached on March 30, Cuomo and lawmakers added $1 billion in funding for education, well beyond the $769 million Cuomo proposed back in January. The new funding includes a $50 million increase in aid to community schools, a $15 million increase to expand pre-K programs, $1.5 million for adult-literacy education and $500,000 for a teacher-diversity program.

Besides the budget itself, Cuomo also rushed to make sure the new fiscal year came packed with progressive legislation, including new policy on sexual harassment and banning those convicted of domestic abuse from possessing guns.

Nixon has also been hitting Cuomo where it hurts on the controversy over New York City subway conditions. He has been forced to take more responsibility for a serious problem for which he has been trying to blame Mayor Bill de Blasio, even though Cuomo has significant oversight of the Metropolitan Transportation Authority, the entity that runs the New York City subway system.

The largest tectonic shift in state politics caused by Nixon’s presence happened just last week. Out of nowhere, the state Senate’s breakaway Democrats reunited with their rank-and-file members. Known as the Independent Democratic Conference (IDC), these eight senators, who include Central New Yorker Dave Valesky, have been caucusing with the Republicans for the past seven years in a bizarre power agreement, helping the GOP maintain control of the upper chamber. Since then, the IDC has had an extremely heavy hand in determining state policy.

Liberals have loathed the IDC and have blasted Cuomo for putting up with it for so long. Cuomo has been able to take advantage of the coalition, as it has allowed him to use them as an excuse for why he can’t pass progressive legislation while satisfying the state’s moderate Republican voters at the same time.

Indeed, Politico reported in 2014, quoting anonymous sources, that the governor was actually “deeply involved” in the creation of the IDC and “absolutely” encouraged a partnership that would give the opposite party control of the Senate.

Maybe that’s why the governor hasn’t spent much of the last seven years commenting on the IDC, except mainly that he supposedly couldn’t do anything about it. Just last year, he said that “if they don’t want to marry, I have no power or role in forcing the marriage.”

Magically, Cuomo was seen just last week with Sen. Andrea Stewart-Cousins, leader of the mainstream Democrats, and Sen. Jeffrey Klein, leader of the IDC, looking more or less like a justice of the peace, declaring his party had reunited in perfect harmony and that Cynthia Nixon had nothing to do with it.

That argument might hold up if the IDC wasn’t perhaps Nixon’s most effective weapon. Just like Teachout’s candidacy four years ago was essentially a challenge of Cuomo’s “Democratness,” the IDC has been Nixon’s strongest evidence to use to do the same. Disbanding the IDC was undoubtedly an attempt by the Cuomo administration to cut off Nixon from exploiting that vulnerable front.

Nixon didn’t appear impressed with Cuomo’s apparent sudden change of heart, saying “if you’ve set your own house on fire and watched it burn for eight years, finally turning on a hose doesn’t make you a hero.”

It’s not just about her, either. Frustrations with the IDC have resulted in several of its members now facing primary challenges of their own. If any of those challengers gain steam in the months leading up to the September primaries, that may put some wind in Nixon’s sails. And despite the reunification deal, Nixon and other progressives have maintained they will continue to fight the IDC.

Is all of this a coincidence? Hardly. Gov. Cuomo, like any other incumbent politician who is as smart as he is, knows that timing is everything, especially in election years. He underestimated Teachout’s appeal in 2014, and she ended up winning a third of the Democratic vote. He does not intend to make the same mistake with Nixon.

He can’t afford to. There is more at stake this time than just winning a third term as governor. His performance in 2018 is his grand audition to national Democratic leaders should he decide to run for president in 2020. And right now, Nixon is the one standing in his way