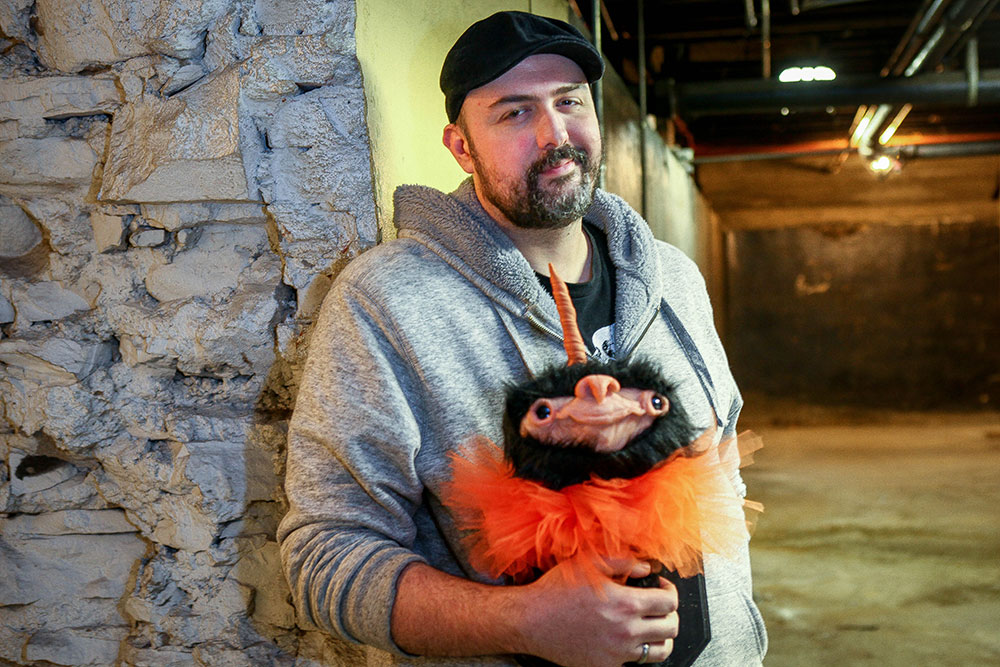 Isaac Bidwell’s art doesn’t exactly fit with what one normally finds in the craft-fair seas of handmade essential oils, pottery and jewelry. Described as “creepy cute,” the pieces for sale through his business Pickled Punks Plush offer a playful iteration of mythology, cryptozoology and vintage sideshow motifs.

“It’s the last thing you’re expecting: I may have a cute cat mixed with something, but then you’ll see Momo the Missouri Monster,” he said. “Most people don’t know what that is, and then I get to tell them the lore behind it.”

Bidwell has been creating artwork full time for five years. He decided to focus on developing his own style and brand two years ago, leading to Pickled Punks Plush. He settled on cryptozoology after an early print of a jackalope — a mythical creature from North American folklore resembling a jackrabbit and an antelope — did surprisingly well at a show.

“People were going crazy over this thing because it’s cute and fluffy and different,” he recalled. “No one else was really doing stuff like that.”

A collection of images by Isaac Bidwell. (Provided photos)

Bidwell fell back on his childhood love of folklore monsters and sideshow culture, letting them inspire his work. Stylized images of Cthulu, Moth Man, the Chupacabra and others now grace his collection, along with some original ideas like the “Catus” (a cat mixed with a cactus) and the “Merpug” (a pug dog with a mermaid’s tail). He also has a coloring book, plushies and sculptures.

“If I’m drawing something and I laugh at it, I know it’s going to work,” he said.

Bidwell worked as a server at Julie’s Diner in North Syracuse for more than a decade before taking his first steps into the art scene at Spoke Art gallery in San Francisco. His original pieces drew from famous pop culture icons: cherub-like reimaginings of Hannibal Lecter, Friday the 13th’s Jason Voorhees, musical artists and more.

He would pitch his work to different blogs for feature pieces, eventually receiving invitations to display at galleries nationwide. He once worked with a gallery to create an official, limited-edition screenprint for the Marvel Comics movie Avengers: Age of Ultron.

The temptation to go off-brand can be one of the harder elements of being a solo artist. Bidwell does not do freelance work and no longer deals with pop culture references. He recently turned down an offer for a partnership with the Warner Bros. TV animated series Rick and Morty on the Cartoon Network’s Adult Swim because that sort of work no longer aligns with his mission.

Organization and financial planning are also notable keys to success. His bachelor of science degree in marketing from SUNY Oswego has helped his career.

Bidwell rents studio space at the Delavan Center on Fayette Street just west of downtown Syracuse. Although his images have a paper-and-ink feel, they’re entirely digital. He showcases his work at more than 30 shows per year, including traditional craft festivals and more niche events such as horror shows like Scare-A-Con or cryptozoology conferences. He’ll have a booth at Buffalo’s Nickel City Con this weekend and plans to attend Syracuse’s annual Arts and Crafts Festival this summer.

With artwork surrounding the fantastic and imaginative, one may think Bidwell is a firm believer in all things mythological. When asked about his faith, he left it open to possibility.

“I was talking to this guy who writes cryptozoology books and asked him the same question, and he said, ‘In the end, it doesn’t really matter if they’re real or not. It’s fun.’ That’s how I look at it, too.”