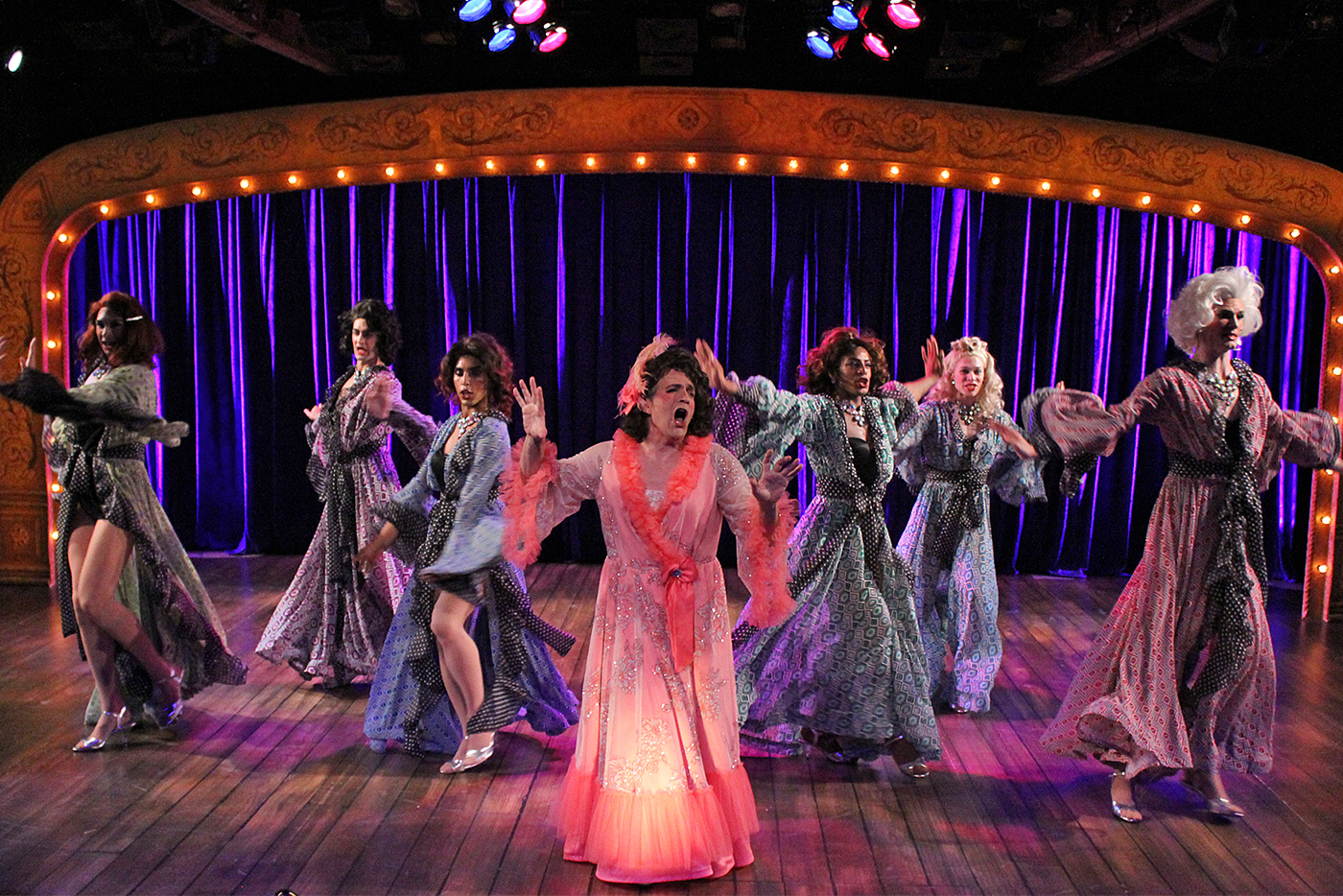 The call went out for 16 perfectly shaped, hairless gams adept at high-kicks and doing the splits. Winsome McKena Silva responded from far-off Caspar, Wyo., and made the cut. But some of the other legs, even those from Central New York, had to be shaved for the required smoothness.

Yes, for Cortland Repertory Theatre’s production of La Cage aux Folles (running through July 8), many of Les Cagelles, the chorus at the Riviera’s cross-dressing nightclub, are indeed young gentlemen. Spoiler alert: The program is not coy about saying which dancer is which gender. Forget the print, however, because your eyes are not lying. It’s hard to tell.

Some or all of the Cagelles have been male in previous productions elsewhere, but director Bert Bernardi and choreographer Matthew Couvillon achieve better results than others in a uniformity of expressive movement and gesture. No one would argue that the chorus members overshadow the leads, but they project much of what fills the eyes and ears from the two opening numbers, “We Are What We Are” and “A Little More Mascara.” They deliver one of the best of Jerry Herman’s numbers, “The Best of Times,” with leads Albin (Joel Briel) and Jacqueline (Jeremy Parker). The chorus benefits hugely from costumer Jimmy Johansmeyer’s witty inventiveness, especially with the faux bird outfits in the second act.

As a stagework, La Cage aux Folles (literally a cage of mad women) started as a farce and grew into a heartfelt declaration of identity and family values. When Jean Poiret wrote the original in 1973, it was a frolicsome gay parody of a familiar middle-class trope: the dread of meeting in-laws. In 1978 the film version became a huge international hit. In 1983 American playwright Harvey Fierstein and composer Jerry Herman (Hello Dolly!, Mame) turned some speeches from the play into anthems, especially the moving “I Am What I Am.”

Restrained Georges (Brian Runbeck) and flamboyant Albin (Joel Briel) are a middle-aged couple living in chic St. Tropez. Georges runs the nightclub of the title where Albin, under his alter ego, Zaza, is the reigning star. Their macho son Jean-Michel (Aaron Jacobs) announces he wants to marry the luscious Anne (Claire Sorlie), daughter of the arch-reactionary politician Monsieur Dindon (Chris Nickerson) and his wife (Rebecca McGraw). Jean-Michel is sure the nuptials will be off if the Dindons learn the truth. The name “Dindon,” incidentally, makes a pun on “ding-dong” in French.

Runbeck and Briel are both Equity players, but the fun is not divided equally between them. Possessor of a rich Broadway baritone, Runbeck is a frequent Cortland Repertory visitor and a winner at the Syracuse New Times Syracuse Area Live Theater (SALT) awards. His many numbers, like “Song on the Sand,” are splendid, but he’s stuck being a sane man in a mad world.

Briel, on the other hand, takes flight in both personae. His lengthy credits include a 10-year run with the Broadway production of Cats, where he morphed into different felines as the occasion arose over the years. He’s well-prepared for this.

In Cortland he’s stronger with the dramatic lines, such as reacting to the hurtful insult of Jean-Michel’s asking him to get lost when the Dindons appear, and deeply emotive when listening to Georges’ tribute, “Look Over There.” He’s also good with both the physical and verbal comedy, such as training to be more masculine by walking like John Wayne, and ripping through the scripted, naughty ad-libs. As a rather stocky fellow who retains his baritone, he’s not especially feminine as Zaza. Yet the tension and hilarity of the meeting with the Dindons is undiminished.

Joel Gelpe leads an eight-player ensemble, with both reeds and brass, that gives Herman’s mighty score an orchestral resonance. Director Bernardi stretches out the escape from the press at the climax, however. Not only do the costume changes take too long, the gag about who will play the bride at the final curtain gets lost along the way.