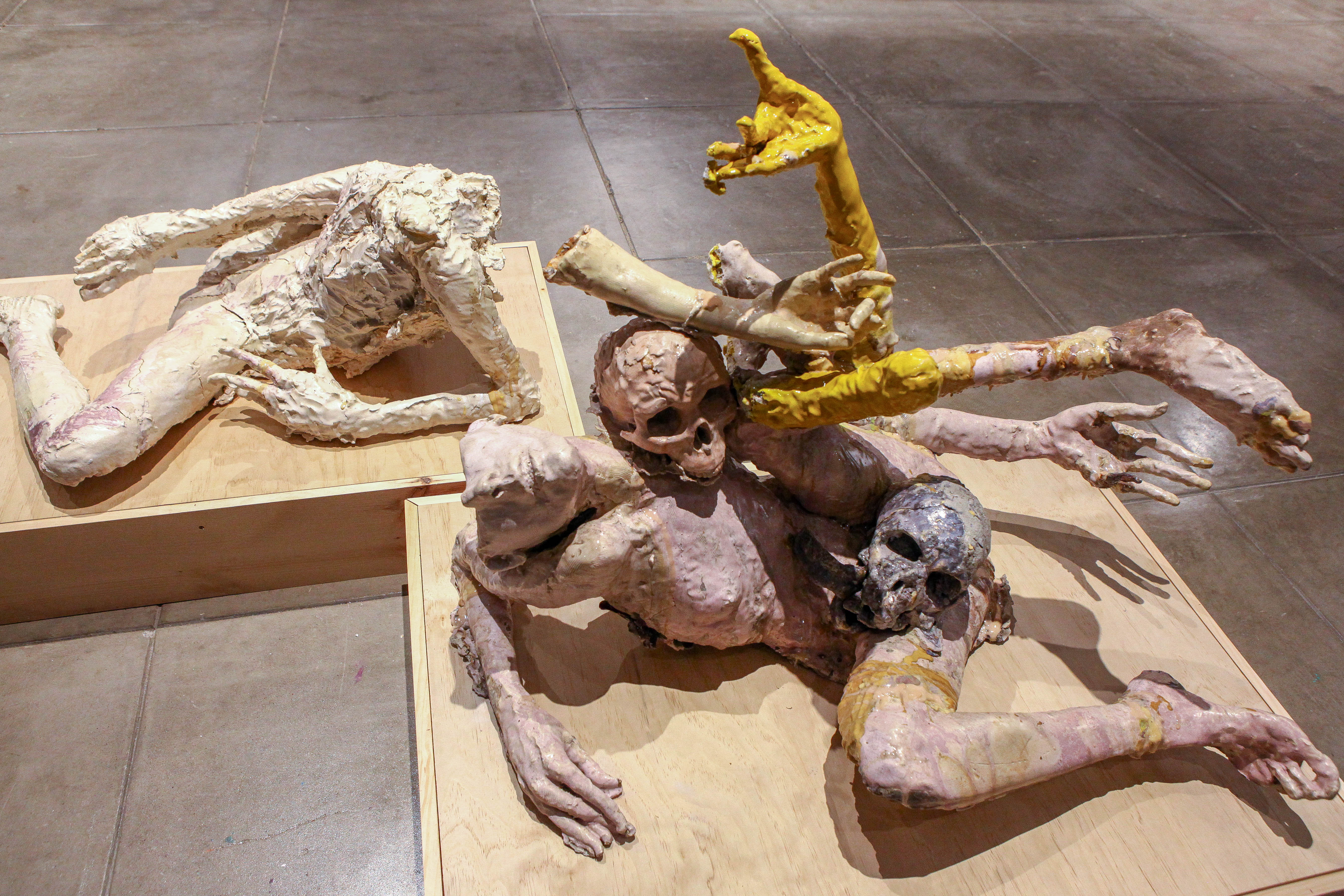 The Everson Museum of Art’s radically revamped Ceramics Gallery, now more than a year old, is still establishing its identity. The second exhibition staged in the space clearly accelerates that process. From Funk to Punk: Left Coast Ceramics, a show spanning 70 years of ceramics on the West Coast, fulfills multiple missions.

First, it provides an overview of West Coast artists encompassing different eras and artistic styles, types of ceramics, and inspirations for the artists. To build a ground floor for the exhibit, curator Peter Held selected pieces from the Everson’s collection that were created between 1936 and 1986.

The “Funk” segment of the exhibition presents works by Peter Voulkos, who is influential for several reasons: his technical innovations; his role in tearing down a perceived divide between ceramics and fine arts; and his ability to create memorable jars, bowls and other works.

It also displays pieces by Glen Lukas, a ceramist enamored of landscapes from the western United States. He is celebrated for playing with glazes, raw surfaces and rough clay designs. Beatrice Woods’ piece “Aha!” is also in the show. She’s noted for making works with a sense of whimsy and a folk-art touch; she intentionally created pieces with a naïve sensibility.

These, and other artworks, make a basic but essential point: West Coast ceramists from that period followed lots of creative paths. That generalization is also true for 24 contemporary artists taking part in the exhibit. Their work, the “Punk” portion of the show, is the primary source of energy for a large exhibit. Indeed, Held chose wisely by including works by Doug Jeck and Meghan Smythe. Jeck makes life-size sculptures evoking everyday people, not gods or goddesses. His creations are vulnerable, injured, even broken down. Thus, “Deacon” sits in a chair with bent legs, no toes, and emptiness where his kneecaps should be. Here Jeck isn’t merely stating that all of us are subject to decline and decay; he’s communicating an emotional component.

Smythe also deals with physicality. Her works at the Everson portray limbs, bones and other body parts sprawled out on the floor. The pieces will certainly gross out some viewers, but that’s hardly the end game for Smythe. She’s contrasting the flesh of people walking around today and flesh that’s decayed, probing into our perceptions of long-vanished communities like Pompeii, which was destroyed by a volcano’s wrath. What are we to think of a place where skeletons and artifacts were buried under volcanic ash?

A third artist, Kate MacDowell, has long made porcelains evoking interactions between humans and animals or humans and plants. She’s deeply concerned about environmental issues and created pieces that depict apples filled with skulls, referencing the use of insecticides on some apple orchards. In the Everson exhibit, “Nursemaid II” shows an infant being suckled by a wolf/human hybrid.

And Wanxin Zhang has impressive works in From Funk to Punk. One piece beautifully interprets the “Pieta,” a Renaissance-period artwork in which Mary mourns the death of Jesus Christ; his body rests in her lap. In “Twin Peaks,” two figures melt together, bathed in yellow and red colors. Born and educated in China, Zhang has lived in San Francisco since 1992.

Ruby Rose Neri is influenced by time she spent as a painter and street artist who created graffiti. Her pieces in the exhibition are gaudy and self-representational; in a cup portraying her, the arms take the place of handles.

The show’s two segments, it should be emphasized, don’t exist in isolation. In many instances, artworks from different decades are positioned side by side. In that context, Richard Notkin’s pieces complement those made by Ehren Tool; both combine ceramics and social commentary.

For more than 40 years, Notkin has made works such as a teapot that is a skull topped by an atomic bomb’s mushroom cloud. Tool, who served in the U.S. Marine Corps during the first Persian Gulf War, has created thousands of cups decorated with images of bombs, skulls and other markings.

And while the show isn’t intended to focus on art history, it does discuss varied influences on West Coast ceramics. The impact of Asian art on Wanxin Zhang is clear: He grew up in China. For Henry Takemoto, who has an exquisite plate in the exhibit, more information is required. He was influenced both by traditional Asian ceramics and abstract expressionism.

In assessing the exhibit, it should be noted that viewers who want to make sense of the “Funk” and “Punk” groupings will have to pay close attention to captions. In most instances, it’s not possible to simply look at a piece and determine when it was created. Beyond that, large exhibitions share a common problem: It’s difficult to view two pieces and make conclusions about an artist’s body of work.

Nonetheless, the show has several positive aspects. Held is comfortable with a variety of ceramic works, including Tony Marsh’s sparse cauldrons, Tonya Batura’s absurdist creations such as a jar containing tongue-like forms, and Sascha Brastoff’s flamboyant plates. In addition, the curator, by selecting some works made during the last three years, has provided a sense of immediacy and connected directly to the current art scene. Finally, he’s enlivened the exhibition’s survey format by choosing individual works that stand out.

From Funk to Punk continues its run through April 15. The Everson Museum, 401 Harrison St., is open Wednesdays, Fridays and Sundays, noon to 5 p.m.; Thursdays, noon to 8 p.m.; and Saturdays, 10 a.m. to 5 p.m. Admission is $8 for adults, $6 for seniors and college students, and free for children under age 12 and members of the U.S. Armed Forces. On every Wednesday, the museum has pay-what-you-wish admission. For information, call (315) 474-6064.