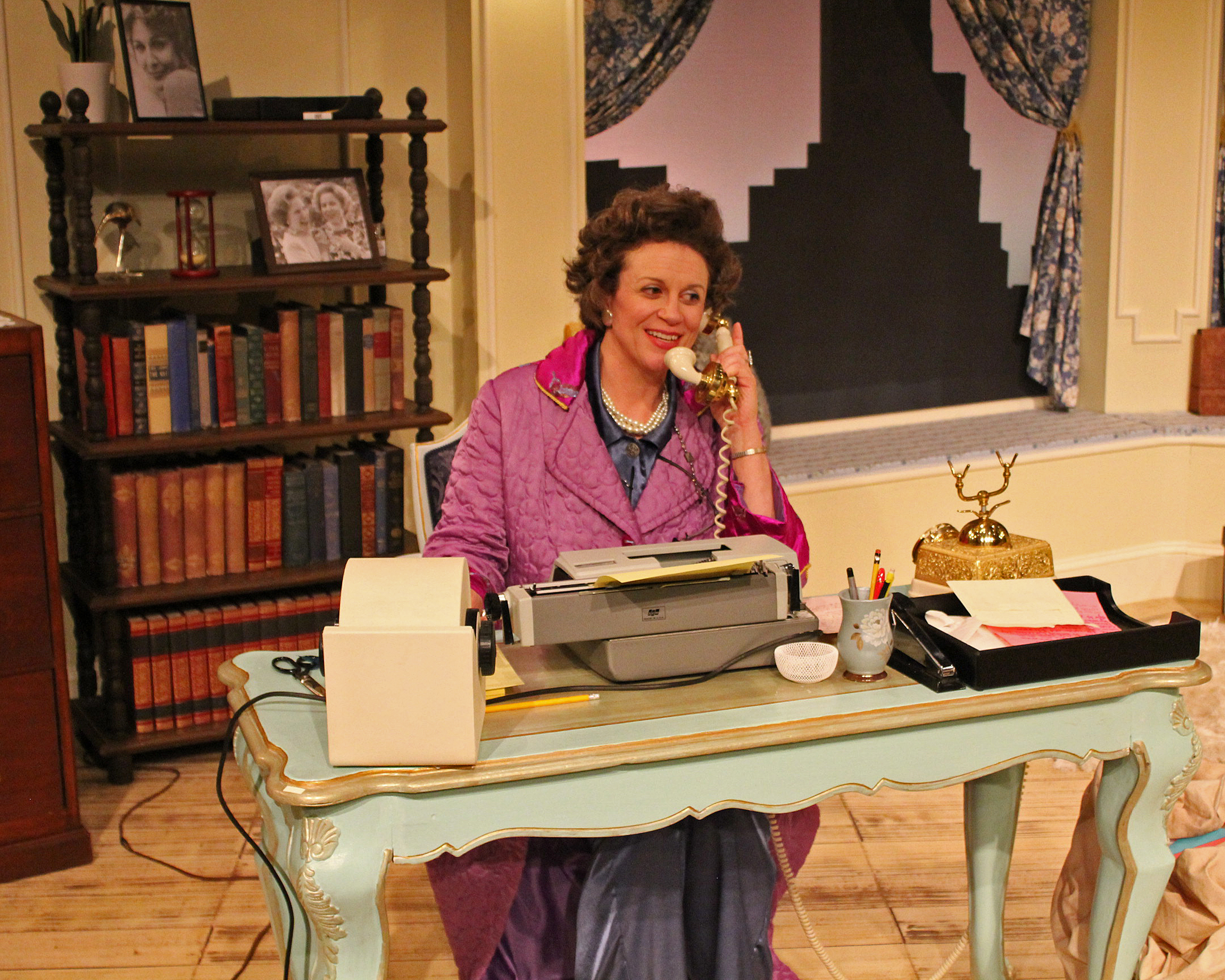 It’s now regarded as the granddaddy of 1950s rock musicals, even though it first started as a wild parody of the Eisenhower era. That’s Grease, which launches the summer season at Auburn’s Merry-Go-Round Playhouse as part of the annual Finger Lakes Musical Theater Festival. The show runs through June 26 at MGR’s scenic Emerson Park venue near the shore of Owasco Lake.

Speaking of scenic, Cortland Repertory Theatre has also kicked off its summer at its quaint pavilion near Little York Lake in Preble. The Lady with All the Answers, a one-woman show about newspaper advice columnist Ann Landers, entertains audiences through Saturday, June 15.

Jim Jacobs’ and Warren Casey’s Grease has become such a love fest that most people know all the original songs, as well as the three that were added to the 1978 movie. Yet we have to be reminded that the show originated as a spoof and a satire. When it opened in a shabby Chicago nightclub in 1971, the musical idioms and styles of 15 years earlier seemed laughably out-of-date. Soon, however, songs such as the campy but plaintive “Freddy, My Love” began to sound like the real thing. Maybe it could have been a big hit in 1957.

Experienced director Igor Goldin handles these colliding motifs like a headwaiter carrying a tray of champagne flutes. Nothing ever gets spilled, no matter how fast he moves. The laughs are in the right place, but the two teen hearts at the center are never mocked.

The key to balancing rapidly shifting moods and tones is Nate Bertone’s two-level set design, framed with the Greek pillars of an aging public high school. Much of the action shifts upstairs in front of the visible eight-player orchestra led by Corinne Aquilina, and leaves plenty of room downstairs for the production numbers choreographed by Phil Colgan. Disc jockey Vince Fontaine at station WAXX appears instantly behind a sliding panel. Auburn’s version begins with the whole company in “Grease is the Word,” taken from the movie and now a dance number that introduces most of the kids, such as the black leather-jacketed T-Birds (renamed in the movie from the original Burger Palace Boys). Mixing in is their female auxiliary, the Pink Ladies, led by more scowling than usual boss lady Rizzo (Mia Gerachis). We easily check off the arrival of all the familiar faces, such as goody-geek Patty Simcox (Viveca Chow) and high pants valedictorian Eugene Florczyk (Trent Soyster), a more adroit dancer than we’re used to.

Moving “Summer Nights” into the second slot means we are introduced to the romantic leads without wasting time, and also the production’s most striking casting choice. Newcomer Sandy Dombrowski (Heather Makalani) is no longer a stand-in Barbie doll but rather an exotic born on the distant island of Guam and trained in Australia. When we hear her big second-act solo, “Hopelessly Devoted to You,” we know how Makalani landed the role. After singing the role of Princess Jasmine in the Australian production of Disney’s Aladdin, she was flown to Broadway to understudy the role there in 2018.

Along with her lyrical strength, Makalani is in top form with comedy, romance and transitioning into her naughty self in tight black pants. Too generous to steal the show (at which she has rivals), Makalani in Auburn bids to be the first-ever Gaumese musical star.

Nor does she ever upstage the pin-up handsome Michael Notardonato as Danny Zuko, the alpha male among the T-Birds, and the tallest. If this were a conventional musical comedy Notardonato would make an excellent leading man, but in Goldin’s direction he also can deliver Danny’s awkward-comic side without losing his charisma. His big second-act solo “Sandy” flutters hearts. He never mimics John Travolta but does list in his credits having played Tony Manero in two productions of Saturday Night Fever.

Director Goldin’s two most arresting innovations are with characters along the margins. He has Darius Harper, a RuPaul look-alike without wig, play both disc jockey Vince Fontaine in a luminous white suit and the Teen Angel, now in outrageous drag with platform high heels, standing perhaps 6-foot-5. That marks the production number “Beauty School Dropout,” with the Pink Ladies and the female ensemble in crowns of silver curlers, as the show-stopper than cannot be topped. Harper, not incidentally, has the legs of a Rockette. Goldin’s staging also laughs at the kind of class-conscious sneering in Jacobs’ original conception. The pathos is gone, only hilarity remains.

Almost as daring is the reconfiguration of the supposedly censorious Miss Lynch (Lindsey Alley), in thick-heeled sensible shoes. Over the years, this character has changed gender and persona, but has still been a curmudgeon. Not here. With Goldin’s direction Miss Lynch literally lets her hair down, a reversal that serves Alley well in a number of new comic bits not seen in previous productions.

Hewing close to the original conception is Mia Gerachis’ dark-browed Betty Rizzo, who mocks Sandy’s arrival with “Look at Me, I’m Sandra Dee,” with the lyric “rotten with virginity.” (The middle-age Sandra Dee — Mrs. Bobby Darin — was reportedly so crazy about Grease’s “Look at Me” song that she insisted on singing it for dinner guests.)

In heavy irony, Rizzo’s loss of virginity and anxiety over the tardy arrival of her menstrual cycle mark the line of her trajectory in the rest of the show. Her big second number, “There Are Worse Things I Could Do,” leaves in the question of pregnancy termination, now more controversial than ever. Tough as Rizzo is supposed to be, Gerachis portrays her as nuanced and deliberate.

Many standouts in the large cast include Noah S. Bridgestock’s Kenickie in “Greased Lightnin’,” Nick Martinez’s Doody in “These Magic Changes,” as well as the duet with Travis Przybylski’s Roger in “Rock’n’Roll Party Queen.” Before this Przybylski literally delivers the skin in “Mooning.” Tall, red-headed and gorgeous, Elizabeth Yanick (also the show’s dance captain) dominates as the late-arriving Cha-Cha DiGregorio, as well as being better-looking than the part calls for.

No one is listed as props manager, but someone must accept applause for delivering the shell of a 1950s Chevrolet, the tails of which are from the 1957 model, that rolls through the lower doors on casters. MGR’s exuberant production of Grease revs up plenty of joy.

Cortland Repertory’s show provides a flashback to the days when newspaper columnists like Ann Landers were used to retain readership. After all, she was the Oprah before Oprah and the queen of print media, with more than 70 million readers for her syndicated columns.

For more than 30 years beginning in the mid- 1950s, Ann Landers was a crisp, succinct presence in American life, with one-liners on everything from how to unroll toilet paper to divorce and suicide. She said, “I’d rather have my columns on a thousand refrigerators than win the Pulitzer Prize.”

David Rambo’s one-woman play The Lady With All the Answers gives her a voice and a dramatic character. The columns might have been her life’s work, but they were only part of the story.

We learn much from Molly Hall’s bright set design before we hear a word. It’s a 14-room apartment in a high-rise above Lake Shore Drive in Chicago. A conspicuous calendar announces that this is June 1975, a month whose ominousness grows over the next 100 minutes. As this was 44 years ago, the posh furnishings are a bit out of date. And so is Ann Landers (Catherine Gaffney), who appears in a high bouffant wig. A photo of Lyndon Johnson hangs prominently on the wall.

Director Kerby Thompson cast Gaffney, last seen as Mrs. Gibbs in Our Town (August 2018), for her verve with snappy retorts but even more for her command of regional accents. Ann Landers might have salted her monologue with Yiddishisms, but she was born and raised in Sioux City, Iowa, where the a’s are flat and nasal and the r’s are hard. Gaffney’s reading of the line, “dining out in Eau Claire,” comes with four r’s.

What we know before the words tell us is that Ann Landers was born to immigrant parents, married a guy who made lots of money running Budget Rent-a-Car, and was anything but patrician. Despite relishing her mink coat, she really had the common touch and never had to fake it.

The lady of the title is actually named Eppie Lederer, who gladly answered to “Ann Landers.” That pen name belonged to the Chicago Sun- Times, also the home base of Roger Ebert and Mike Royko. There had been several writers for the advice column under that name, one male, before Eppie appeared in the mid-1950s.

She had come to prominence for opposing red-baiting Sen. Joseph McCarthy, and many prominent people liked her style, her major qualification. Gregarious and well-connected, she had access to top authorities. For one legal question she called on pal William O. Douglas, the Supreme Court justice. Unlike her predecessors, after decades of always meeting deadlines, Eppie became Ann Landers.

Eppie is also the twin sister of Popo, aka Pauline Phillips, who wrote the rival advice column Dear Abby under the name Abigail Van Buren. On this matter Lady With All the Answers, supervised by Eppie’s daughter Margo, fudges things a bit. Abby might have been slightly less well-known, but she sometimes had more readers than Ann Landers and outlived her. The script has them as friendly competitors who patched up differences, an assertion that a few minutes’ search on the internet will refute. No matter. Eppie’s drama lies elsewhere.

Lady rides three dramatic arcs with a barely necessary intermission. That’s when Eppie slips into something more comfortable and confesses she likes to lie at length in bubble baths. In the first act’s arc she learns that instead of doing something frivolous and empty, she is connecting with and touching people’s lives and gains ownership of what she is saying.

In the second arc she grows in moral responsibility when recognizing how many potential suicides are guilt-ridden closeted gays. She visits troops in Vietnam (a war she opposed) to take down more than 2,000 telephone numbers, calling loved ones when she gets home. In the third arc she addresses the significance of June 1975, and why she is struggling to write the hardest column she has ever had to deal with.

Suspense is not a great asset of Lady, but Gaffney and director Thompson make the journey worth it. When the letters first began to roll in Eppie wondered, as cynics will, what kind of a person asks a stranger in a newspaper for advice? Some letters are both doltish and titillating, like the woman who wants empathy for her desire to do her housework alone and in the nude.

Her years on the job coincided with the sexual revolution, and Eppie, no prude and candid, was a part of it. When, early on, she dared to use the word “homosexual,” some small-town newspapers refused to run her column and denounced her on the front page.

The elephant in the room is what happened in June 1975, when she had to tell her readers about her personal crisis, not to be revealed here. As in all her columns, she is clear-eyed and without rancor.

The Lady With All the Answers has been a star vehicle for several prominent performers, notably Judith Ivey. In a role that never gives her a moment off, Catherine Gaffney has the sparkle, the depth and the answers.