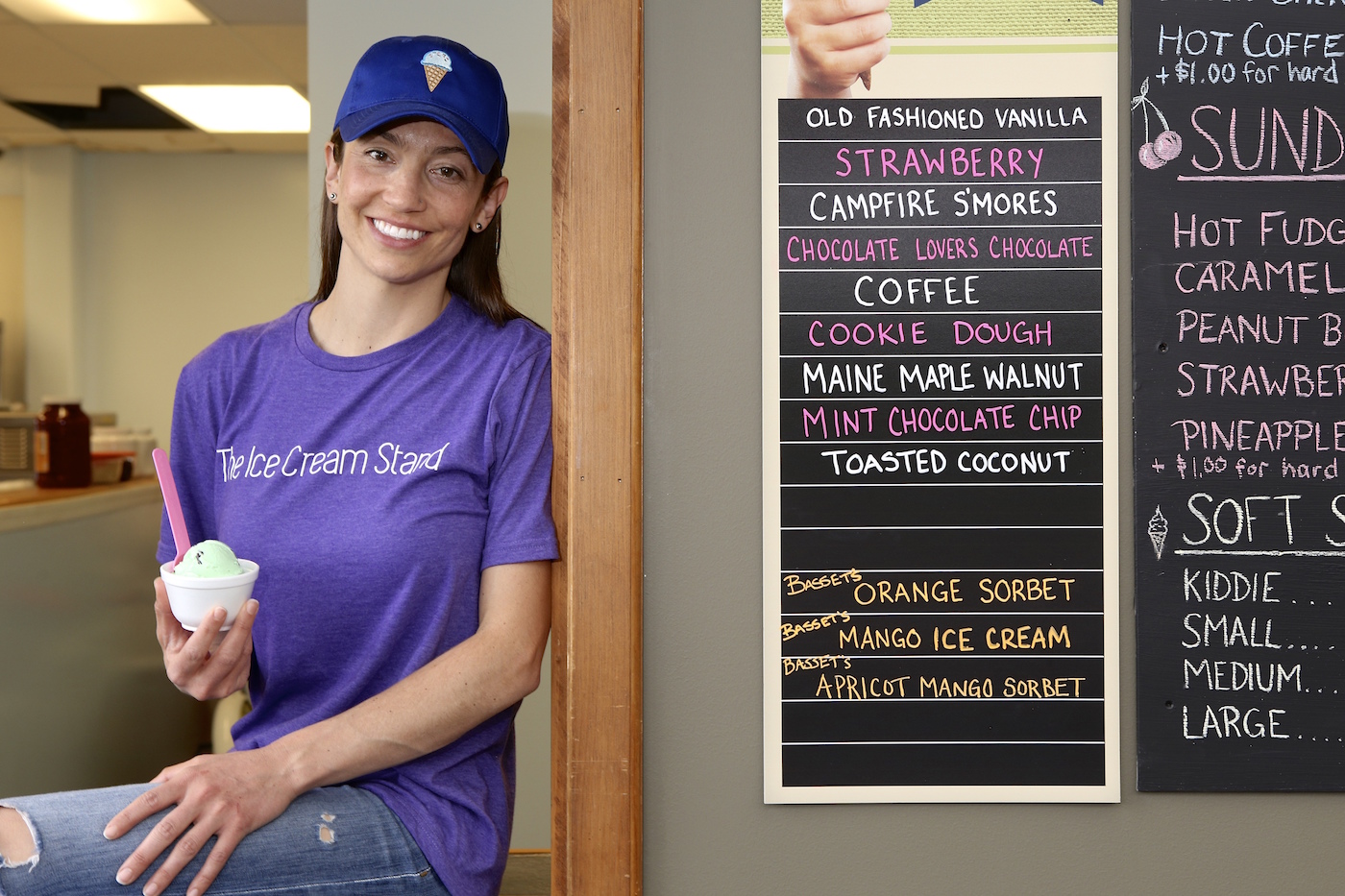 The Ice Cream Stand arrives just in time for spring.

Amanda Hughes likes the verb “indulge” and uses it a lot. She signs her emails with it, hashtags it on social media and plans to have it embossed on the walls of her new business.

“I looked it up,” Hughes said last week. “It means to enjoy something.”

Hughes is indulging her entrepreneurial streak at The Ice Cream Stand, which is sandwiched between CoreLife Eatery and Chuck Hafner’s Farmers Market and Garden Center, at Taft and Buckley roads. The Ice Cream Stand opened April 1 — at about the same time winter decided to revisit Central New York — and has been doing a steady business as spring arrives in earnest. It’s a small space, with two exterior walk-up windows (next door to Core) and an inside window accessible from one of the Hafner’s greenhouses. The greenhouse window is also accessible from the back of Core.

Hughes is starting this season off simply, until she gets her arms around training and managing a staff, the logistics of running a small business and keeping an eye on the weather — which can have a huge impact on ice cream traffic.

The menu features about a dozen flavors of Gifford’s hard ice cream (from Maine), everything from classic vanilla to toasted coconut and Campfire S’mores. There are also fruit sorbets, soft-serve chocolate and vanilla ice cream (or a twist for the indecisive), soft-serve frozen yogurt and Dole Whip soft serve in fruit flavors (dairy free, gluten free, vegan). Sprinkles are available in abundance.

You’ll also find sundaes and floats, including root beer floats made with Saranac root beer. In the mood for coffee? There’s Recess coffee — or indulge in a coffee float.

Hughes plans to add a short list of smoothies to the menu. Her ultimate goal is to create some of her own homemade ice creams for purchase.

Hughes has spent much of her life working in the food industry. Her resume includes stints as a server and bartender. She also has a degree in sociology from Duke University and an MBA in marketing from LIU Brooklyn. When she moved back to Central New York last year, Hughes was looking for a full-time position in her fields, but “not finding exactly the right fit.”

“It’s the perfect pairing with my education and experience,” Hughes says of her decision to open The Ice Cream Stand. “I love food and I love being with people. Food is such a connector.”

Hughes grew up on nearby Allen Road, attended area schools and has fond childhood memories visiting the seasonal ice cream stand at Hafner’s. “We would go there after our wins,” she recalls, “and sometimes even after our losses.”

She plans to keep The Ice Cream Stand open into December. Hafner’s does a brisk business at the holidays, she says, and Central New York’s appetite for ice cream extends beyond the warm weather months. Summer is for long lines at the window, long days and doing and learning as much as she can. During the winter, Hughes says, she’ll recharge.

There’s a place on Otisco Lake with a spectacular view of the lake. If you’ve been around a long time, you may remember it as the Forest Home Hotel. More recently, it was known as Footprints on the Lake and The Overlook.

It’s now known as the Lakeside Vista Restaurant. We’re hearing it’s a nice place to indulge in drinks, dinner and Sunday brunch — not to mention the view.

The restaurant has been operating on a limited basis since last fall, with Friday and Saturday dinners, Sunday brunches and private functions. Summer hours premiere in May, along with an expanded menu. Dinner will be served Wednesdays and Thursdays, 5 to 9 p.m., and Fridays and Saturdays, 5 to 10 p.m., with Sunday brunches from 10 a.m. to 2 p.m.

Fridays will also feature live music and a focus on Finger Lakes wines and wineries, with complimentary pours and pairings. And deck seating is bound to be a hot ticket come summer.