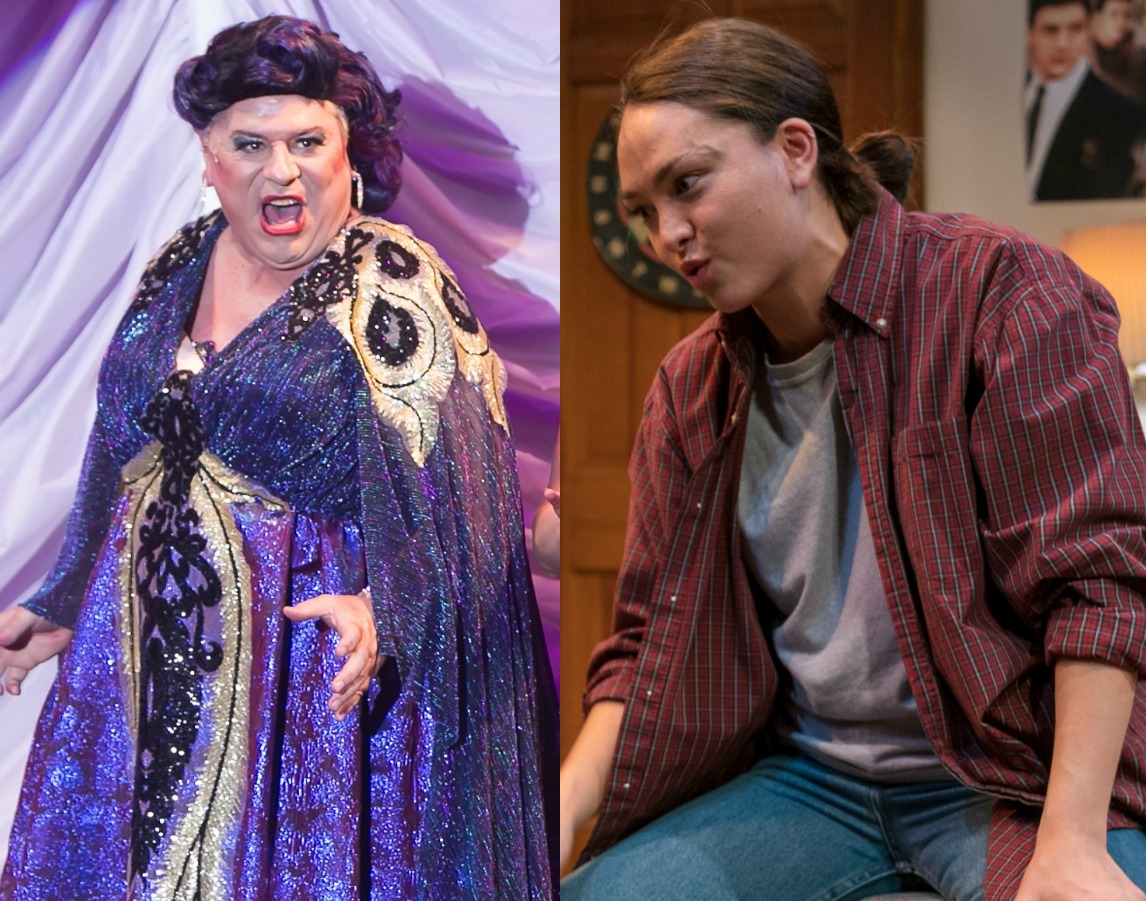 Boys will be boys. Sometimes, these days, girls are also boys. So consider Mindy Kaling and Brenda Withers’ satirical spoof Matt & Ben about how two fractious twenty-something guys happened to write an original screenplay that was instantly produced and won an Academy Award.

Kaling and Withers, who were also twenty-something when they wrote Matt & Ben, saw the roles as vehicles for themselves. Keeping with that casting choice, the season finale at Ithaca’s Kitchen Theatre Company (through June 17), directed by Shana Gozansky, puts two women in the title roles. Not so much for feminist politics, as for laughs.

As the reader has already assumed, the title characters are Boston-area actors Matt Damon (Caitlin Nasema Cassidy) and Ben Affleck (Lilli Hokama), whose first attempt at a film script was the phenomenally successful Good Will Hunting (1997), set on streets they both knew well. Both Damon and Affleck had already played prominent supporting roles. A poster for their 1992 movie School Ties adorns the wall of their squalid apartment.

They were hardly nobodies, but the Kaling-Withers script implies a note of jealousy: Why these two jerks instead of us? Matt & Ben appeared in 2002, and since that time playwright Kaling has also made it, with TV’s The Office and The Mindy Project.

Kaling and Withers have assumed that the two guys have been so much in the public eye that we know quite a bit about their off-screen personae as separated from roles they have played. The shorter, more intense Damon is the son of a stockbroker and a university professor who grew up in the rarefied dovecotes of Cambridge, Mass. It does not take much exposition to portray him as a driven overachiever.

The rougher-edged Affleck came from a bit lower on the social ladder and moves with a coarser manner. This means that Hokama can have more fun with Affleck’s macho mannerisms, his swaggering gait and thrust shoulders. She has perfected the guy trick of throwing a nugget of sugared cereal into the air and catching it in her mouth every time. Good as this is, the character seems to be lurching toward Oscar Madison and short-changes the mature Affleck, auteur of The Town and Argo.

The boys’ initial attempts at writing a vehicle for the screen are hopelessly lame: an adaptation of the unfilmable Catcher in the Rye. In a moment of magical realism Catcher’s author, the famously reclusive J.D. Salinger (Cassidy wearing a bow tie), appears before them to tell them he’s against the adaptation.

So is the Matt-and-Ben script the result of 10 percent inspiration and 90 percent perspiration? No, it’s too good for that, Kaling and Withers say: The script for Good Will Hunting just falls miraculously from the sky.

More gender-bending humor is on deck with the second Redhouse at City Center production, now taking place through Sunday, June 10, at the capacious Austin & Allyn Auditorium in the restored Sibley’s building. The Redhouse has slated another show with wide audience appeal: La Cage aux Folles, with Jerry Herman’s golden score and Harvey Fierstein’s quick-witted lyrics, has been wowing local theatergoers for three decades.

The question is: How to give it a different spin from what has gone before? Enter two forces: ebullient Steve Hayes, a company favorite as the cross-dressing lead, Albin/Zaza, and Cassie Abate, a director-choreographer with top national credits, now on the faculty of Texas State University in San Marcos.

Abate reduces the chorus, the Cagelles, down to four, sometimes numbering four times that many in other productions. She also jettisons the conceit that gender is ambiguous, with female legs mixed in with the male. Not only do we know who’s what, but one character named Mercedes (T.J. Newton) has a running gag that drag is exhausting work. Little wonder: All the dance numbers are ambitious and gymnastic, with multiple splits and sky-high kicks. No expense has been spared on constant costume changes, usually showing muscular calves as fetching.

Dance also unites father and son. The premise of the plot is that fresh-faced Jean-Michel (C.K. Anderson), son of Georges (Dirk Lumbard), owner and emcee of the St. Tropez transvestite nightclub cited in the title, wants to marry Anne (Liana Rose), from a reactionary homophobic family. As has not been seen elsewhere, father and son break into a show-stopping tap number as they reconcile and head toward the finale.

Steve Hayes has become a familiar face at the Redhouse. He was recently featured there in an autobiographical show, Raised by Warner Brothers, Born in Syracuse, and previous appearances include a vaudevillian Polonius in Hamlet (March 2014) and Edna in Hairspray (December 2012), a role not unlike Zaza/Albin.

Although his silhouette must have been a challenge to costumer Raven Ong, the results are dazzling in scene after scene. Hayes leaps into some of Zaza’s best scenes, featuring naughty interplay with people sitting in the first two rows. He elaborates on these with some favorite imitations, including Marilyn Monroe, Marlene Dietrich and Bette Davis.

Hayes is just as adept at pulling tears as evoking laughs. When Harvey Fierstein rewrote Jean Poirot’s stage play, he emphasized the pain inflicted on gays by puritanical bigotry. When Zaza is rejected and alone, Hayes becomes the mater dolorosa.

Company regulars John Bixler, of the iron diction, and Laura Austin, with a newfound giggle, deliver the goods as the nominal villains, the Dindons, both decency fanatics. Local veteran Aubry Panek is reliably sexy and provocative as the rival nightclub owner Jacqueline. And music director Bridget Moriarty leads a four-part ensemble on stage, making Jerry Herman’s score a part of the action.

Taste of Syracuse brings national and local bands to the heart of Syracuse
A Shakespearean Summer: 12 venues for live theater in CNY
To Top