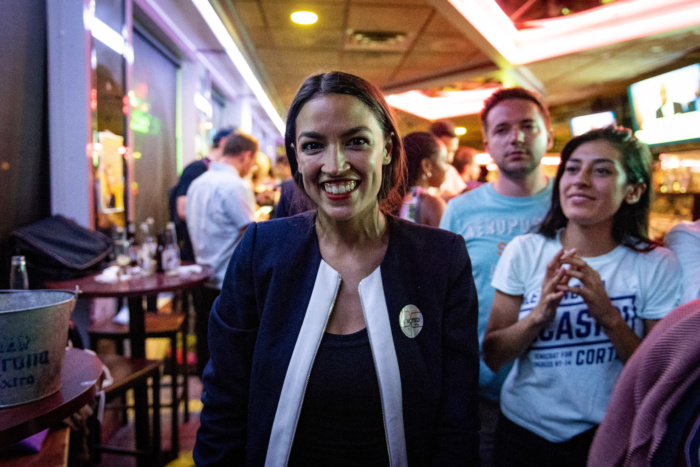 U.S. Rep. Alexandria Ocasio-Cortez went from an absolute nobody to one of Time magazine’s most influential people of the year after defeating longtime Rep. Joe Crowley in a Democratic primary in New York’s 14th Congressional District 10 months ago.

Now the very act that catapulted the controversial congresswoman into the national spotlight is what she is now being reprimanded for.

In the last few weeks, she has taken fire from all members of the political spectrum for her encouragement to other insurgents to primary against incumbent members of Congress in the next election and those after.

This came to a head when the Democratic Congressional Campaign Committee (DCCC) came out in March with a new rule that dissolves committee business with political consultants and pollsters who go to work for primary challengers, essentially disincentivizing support for future insurgents to run in order to protect incumbents.

Just two months earlier, members of the Republican National Committee urged a change in their own rules that would close a “loophole” that would prevent any Republican from waging a primary against President Donald Trump in his 2020 re-election bid. Former Massachusetts Gov. Bill Weld has since announced his intention to do just that.

“Unfortunately, loopholes in the rules governing the 2020 re-nomination campaign are enabling these so-called Republicans to flirt with the possibility of contested primaries and caucuses,” RNC committeeman Jevon O.A. Williams said in a email obtained by The Washington Examiner.

In both instances, in both parties, we should be asking “what’s the big deal?” We are not and should not be an anti-primary country, and participating in a free and fair election against any incumbent is not a “loophole.”

Yes, no one currently in office probably wants to face an opponent, especially one from their own party. But if anyone with any political stance believes their representative — be it their congressperson, president or county executive — isn’t properly acting in the best interest of their constituents, then they have the right to challenge that representative if they deem themselves worthy of the same office. The incumbents don’t have to like their opponents, but they should understand that is a basic function of the republic we live in.

As they try to maintain their House majority and unseat President Trump in 2020, the Democratic Party in particular has been especially vocal about warning insurgent candidates gearing up for primary challenges following last year’s progressive wave highlighted by Ocasio-Cortez. Some of the blowback is coming from the most unusual suspects.

Around the same time the DCCC was considering changing its rules, former President Barack Obama was speaking in Europe and ushered a warning of his own to progressive office-seekers. “One of the things I do worry about sometimes among progressives in the United States,” he said, “is a certain kind of rigidity where we say, ‘Uh, I’m sorry, this is how it’s going to be’ and then we start sometimes creating what’s called a ‘circular firing squad,’ where you start shooting at your allies because one of them has strayed from purity on the issues. And when that happens, typically the overall effort and movement weakens.”

Really? This is Barack Obama — the person who dared to run against the Democratic establishment’s coronation of Hillary Clinton in 2008 — telling people about going up against their party allies.

It’s not just at the national level, either. In New York, several progressive candidates toppled longtime Democratic incumbents in the state Legislature last fall and helped the party win control of the state Senate. After a number of inner party schisms in the last few months, most notably the split over the canceled Amazon deal in New York City, anti-primary sentiments have been shared publicly in the last few weeks.

The mood was echoed days later by Gov. Andrew Cuomo, who himself comfortably survived primary challenges in 2014 and 2018. “I think it is destructive,” Cuomo said in a radio interview. “It’s also an aberrational political moment. You don’t normally have members attacking members. I don’t think it’s productive, I also think it’s dangerous.”

Like Obama, this is the same Cuomo who jumped in the race for governor in 2002 against party favorite Carl McCall.

Here in Central New York, it’s only the beginning of May but there are already three Democratic candidates running for New York’s 24th Congressional District seat. It’s uncertain right now if any will go on to primary each other, but there was a surprise Democratic primary last year when former Syracuse mayoral candidate Juanita Perez Williams waged a late challenge to party-pick Dana Balter. Interestingly, Perez Williams was urged to run by the DCCC, the organization that now doesn’t like primaries.

Part of the problem is our instant portrait that primary challenges are made because an incumbent isn’t conservative enough or liberal enough. And while that is mostly the case, why can’t someone just run a primary because they feel like they would do a better job, regardless of their representative’s political preferences?

We shouldn’t discourage that. We should welcome anyone from any background who wants to run for public office because it helps reinforce our most basic principle. Party leadership doesn’t choose public officials: People do.

Blog | The UFO Comfort Factor: How close is too close?
Column | Squabbling over community grid proposal will only delay I-81 problem
To Top