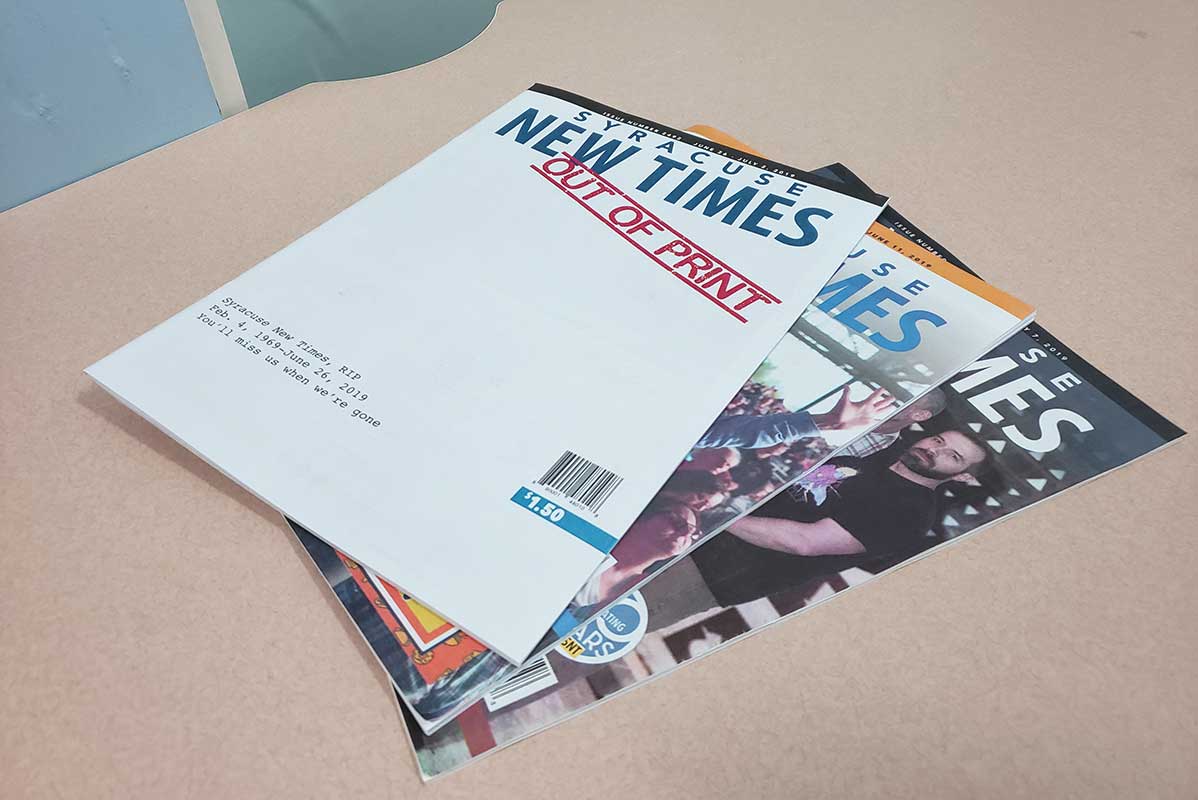 When a newspaper closes, it’s just as sad as when the big factory in town closes, or when that family restaurant on the corner is forced to shut its doors after being in business for multiple generations.

This is true for any town, large or small, and for any type of publication, whether it’s the daily Rocky Mountain News in Denver or the alternative weekly Syracuse New Times right here in Central New York. I’ve read and heard a lot of sad stories about newspapers gutting their staffs down to the bare minimum or closing their doors completely during my short four years in this challenging industry. And each time, it hurts.

Every time I see it, I can’t help but think of the career veteran reporter with more awards on their walls than family photos who may have lost their job and will now leave the industry for good out of frustration or desperation. I can’t help but think of the town board meetings that will go on without a reporter there to keep the powerful accountable while they conduct the people’s business.

I can’t help but think of all the stories that will now never be told: whether it’s the details of a school budget plan, a business that polluted a waterway, who are the candidates for mayor or city council and what they stand for, how decisions in the state capitol affect citizens hundreds of miles away or how that hometown boy returned home to open a new art gallery in that rambleshack building on the riverfront and turn it into something special.

I do not subscribe to the commonly thrown-around notion that local journalism is dead. As human beings, we have a natural hunger for information and news. And the closer that information is to us, our homes, our schools and our businesses, the hungrier we are.

I see the evidence all the time. In our nationalized news culture, many local newsrooms across different platforms over the years have tried to keep eyeballs by either focusing on national news or stretching the limits of somehow localizing national stories.

As someone who has worked in digital news departments for several years now, I have the opportunity to look at the numbers. Despite the belief that national stories or viral videos get the attention, in local newsrooms it is always the local stories that get the most online hits, the most shares, the most retweets, the most comments and the most reactions.

While nearly 1,800 local newspapers in the United States have folded in the last 15 years, it’s certainly not because we’ve stopped caring. Small newspapers may die. Our need to know what goes on never will. Indeed, I believe in this age of changing media, the hunger is greater than ever.

That’s why I created this commentary series: to discuss the topics that may get lost in the day-to-day news cycle. That’s why I’ve put such an emphasis on news that comes out of the state capitol in Albany. That’s why I work for local news companies.

And that’s why so many of you — either people I know that I see in public or strangers that took the time to send me an email — have told me time and again during my tenure at the Syracuse New Times that you’ve enjoyed the topics I choose to discuss, that you’ve appreciated my approach to commentary that doesn’t particularly argue right vs. left, but rather right vs. wrong.

Those are the things that matter. And they will still matter long after the Syracuse New Times ceases publication. That’s why I won’t abandon them. It is my hope that you won’t either. Thanks for reading.

Column | Cuomo will never win a popularity contest, yet he keeps winning gubernatorial elections
Blog | UFO news, disclosure and the demise of a great newspaper
To Top