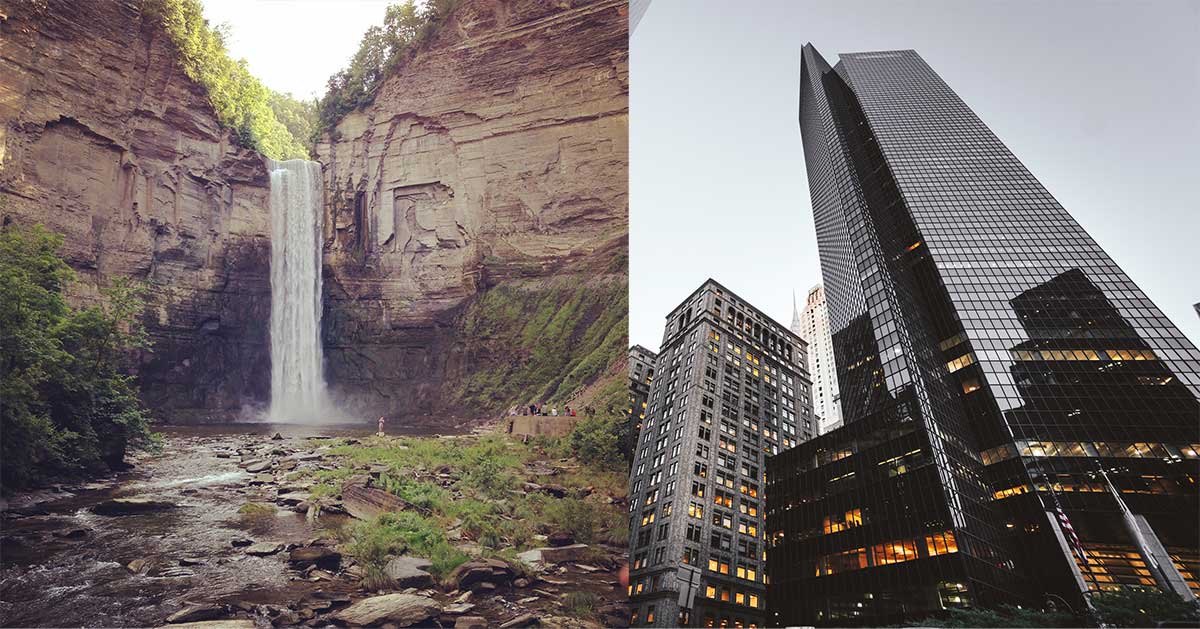 Splitting New York State in two isn’t a new idea, but it may be more complicated — and potentially damaging — than some supporters expect.

In the days after last fall’s midterm elections, when Democrats won a majority in the New York state Senate and would completely control the state government come January, a movement re-emerged from social media comments and Facebook groups that echoed a longtime sentiment of some of the state’s frustrated voters.

It’s time to split New York into two states, they say, and liberate upstate from the enormous power grasp that New York City and the downstate region have on state policy and identity. In the last few weeks, the idea to declare upstate’s independence has moved from online conversations to conversations in the state Legislature.

On the first day of the 2019 legislative session, a bill was introduced by Rochester-area Republican Sen. Joseph Robach that would put a referendum on the ballot that asks voters if they would support dividing the state. This bill has been introduced multiple times and gone nowhere.

Then a few weeks ago, Republican Sen. Daphne Jordan, from Saratoga County, also jumped in the conversation. Her bill would create a 15-member working group to study what a separate upstate could look like and what sort of ramifications could come with it.

This is hardly the first time this idea has been floated from actual government officials and not just New York secessionist groups. Robach first introduced his referendum legislation in December 2009 — the last time Democrats held all three branches of government.

In 2015, several groups angered by gun laws and a ban on hydrofracking staged protests in the Southern Tier and even proposed that upstate break off and become part of Pennsylvania.

There’s no question that the state’s fault lines run deep. Far from just a typical divide between urban and rural lifestyle, upstate and downstate are divided politically, economically, culturally and demographically. They’re even divided on where upstate begins.

Related: Column | ‘Up yours’ to Upstate NY in 2018 statewide elections

For too long, upstate residents have felt ignored by their downstate-dominated government. While New York City and the surrounding area have largely recovered from the recent recession, upstate has lagged behind considerably. Its unemployment rate is often higher than the national average. Report after report shows statewide job creation has been disproportionately downstate-concentrated, sometimes by a 4-1 ratio. And high taxes coupled with a hostile business environment have forced hundreds of thousands of people to move out of New York over the last 10 years.

So is splitting the state in two the ideal fix? While it may sound reasonable to some, it is a simple solution to a complex problem.

If upstate — everything north of Westchester County — were to separate, that money would suddenly shut off and the new state would be in a much worse position. According to a 2016 Politifact analysis, upstate as an independent state would fall to one of the worst state economies in the country. It would rank 37th in the nation for household income where it now ranks fifth. It would rank 44th in average wages; currently it ranks second.

It would take decades to string together a new economic system to make up for that revenue shortfall, including the loss of tax dollars from those who would continue to move out.

We know about Albany’s slow pace. Lawmakers debating a hard economic reset while trying to decide how to structure an entire new government would take forever. Meanwhile, they would have to deal with more time-sensitive issues such as funding our crumbling infrastructure, an incredibly expensive task that we would suddenly have to carry the entire financial burden for.

The best example of this was the complex and controversial 2016 agreement to steadily raise New York’s minimum wage. Gov. Andrew Cuomo and downstate lawmakers initially seemed dead set on raising the wage to $15 an hour statewide in a relatively short period of time. Senate Republicans and some Democrats from upstate quickly jumped on that proposal, aware of downstate’s cost of living, but concerned such a hike in the cheaper upstate region would crush business creation, layoff low-wage workers and cut hours.

After years of fighting, upstate lawmakers were able to convince their downstate counterparts that a two-tier compromise to raise the wage at different rates for the two regions was the best route. They agreed to steadily raise the wage to $15 in New York City, which it reached at the end of last year, and to $12.50 upstate by the end of 2020, with a chance to examine a continued path to $15 at that time.

It was a real breakthrough moment, where such landmark legislation was tailored to better fit each region’s individual needs. It also appears to have done well. New York City has the wages it asked for and the upstate economy is still intact. The wage compromise should be a model for the state’s path forward on some of its most divisive issues.

No matter who controls Albany, it is imperative that downstate officials remember that the other half of the state needs their priorities taken into account. Upstate and downstate are stuck with each other: We can’t afford to be apart, so we must find a way to live together.

Column | So-called political crises can lead to abuses of power
Blog | Is ‘The 37th Parallel’ really the UFO Super Highway?
To Top