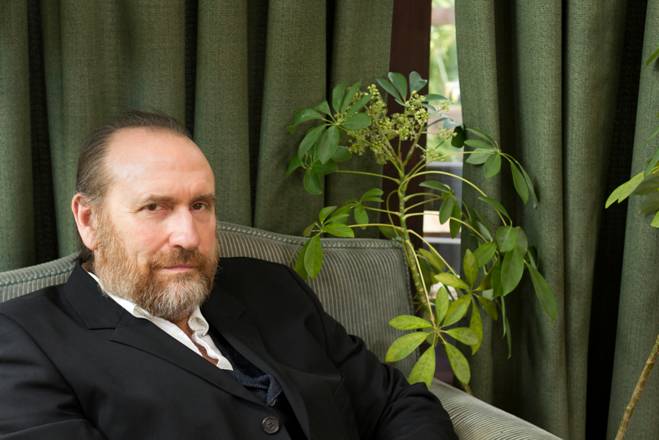 Known best for his time with the 1980s group Men at Work, Colin Hay has gone on to have a prolific solo career. Even after hits like “Down Under,” “Who Can It Be Now?” and “Overkill” dominated the world, he’s released 12 solo albums including 2015’s Next Year People. On Thursday, July 14, Hay plays the Smith Opera House in Geneva.

With a quick wit and mixed Scottish, Australian and American accent, Hay says he doesn’t need to persuade people to come to the show. “Let’s face it,” he says. “What else will you be doing that day? Coming to see us will be the best decision you make that day. No, that week!”

Although Hay started his tour solo in Colorado, he’ll have his band with him, bringing a big sound to the opera house. “I don’t get to tour much with the band,” he says. “They’re great musicians. It’s going to be a good hang.”

He also promises new songs that have yet to be recorded. “It’s like a birth,” he says of the next album in the works. “Conception has taken place and I’m working on the songs right now. Nine months from now. . . I’m very excited.”

His album Next Year People (Compass Records) touches on an unlikely subject: the Great Depression and the Dust Bowl. The title track takes on a farmer’s perspective of the struggles during that time period, while other songs speak to Hay’s own experiences. “Waiting in the Rain” recalls memories of his family’s Scottish music shop (he was born and raised in Scotland until he moved to Australia when he was 14), while other tracks utilize the help of co-writers including Michael Georgiades, Richard Jacques and Renee Stahl.

Georgiades and Hay met in 1993 at Los Angeles’ Westwood Music, when owner Fred Walecki said the pair should know each other. Georgiades had been a songwriter for many years and both were addicted to guitars and trading axes.

“We were men acting like children,” Hay says. “That’s the basis of our friendship.” On Next Year People, Georgiades has credits on six of 10 songs.

“When I’m on the road, I just record little ideas,” Hay says. “When I get home, I have 40 to 50 ideas that I listen to and see if any are worth working on. Then Michael comes over and he plays ideas. That’s where it comes from: sitting around messing with ideas we have and they become songs. Then we bicker and argue a lot and sometimes we even get upset with one another. Then we take a break, have some coffee and then we go at it again.”

The result is an album of stories and acoustic textures that make for a relaxing listen.

“When Michael and I sit around with guitars, there’s an increasing sense of mortality for both of us,” says Hay as he turns serious. “He’s a bit older than me and I’m 63. When you’re younger, you don’t think about it much. But when I turned 60, I went, ‘OK, I can remember the last 20 years pretty easily, but they went by quickly. When I was 40, it seems like a minute ago.’ With everything you do, there is more of a time pressure to get things done, a sense of importance and being able to really say something and express yourself in the midst of a lot of blackness occurring in the world.”

Although Men at Work broke up in 1985, the impact of that band has never left Hay’s mind. “It’s both fulfilling and frustrating,” he says. “I’m grateful to still have a career and be gaining momentum. If I’m on a roller coaster, I’m still going up and haven’t hit the top yet. That’s how it feels to me.

“But it’s frustrating in this, if you want to call it a music industry. I don’t really feel part of it. It seems like more of an obstacle course, but things are going pretty well. They could always be better, but could always be worse.”

“Do it. Why not? It’s a great life. I think you have to have talent and work really hard, but it’s a great life to have. Plus, it’s better to avoid the straight world. I have, and it seems to have worked so far.”

Chatting With A Stoopid Moran
He Digs the Classics: New curator comes to Syracuse’s Everson Museum
To Top