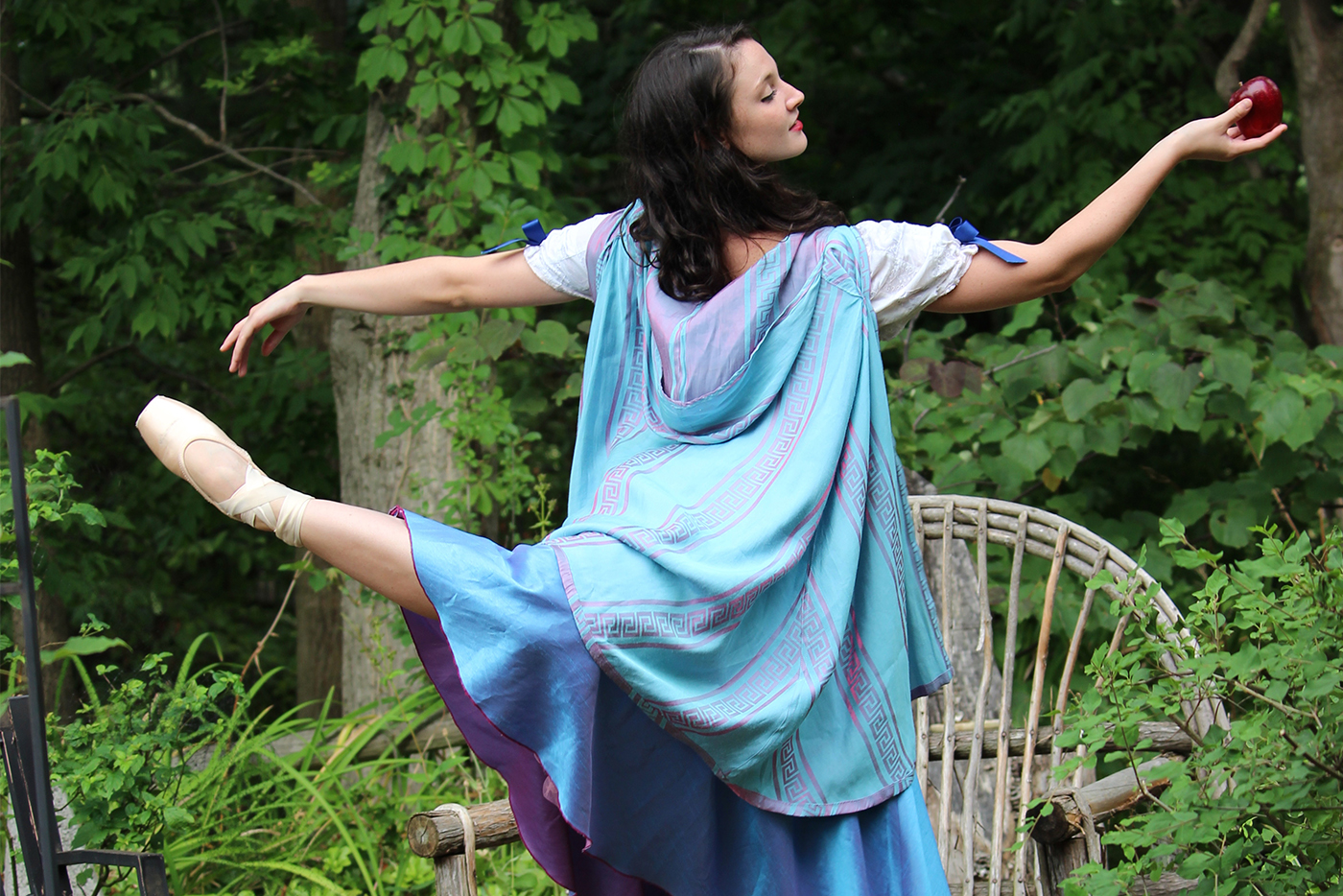 Now 21, Rathbun participated in a later production of Snow White when she was a teen, but as a woodland creature. “I recently watched the video,” she said, “and I’m seeing me as a 13-year-old kid. I’m a bunny.” Now she takes a bite out of the central character.

Rathbun’s mother, Kathleen, officially incorporated the regional ballet company in 1997. In other interviews, the founder and artistic director reflected on the risky venture of starting the company. Its longevity speaks for itself.

Kathleen Rathbun created the Snow White ballet, which will have updated costumes and revamped set design this year. The storyline pulls from Jacob and Wilhelm Grimm’s infamous story, not the Disney version. Instead of one instance of deep sleep, for instance, Snow White’s narcolepsy is induced by the evil queen to follow the literary rule of three times.

“She comes across the seven dwarves’ house, cleans up a little bit and falls asleep in the bed,” said Claire Rathbun, “because that’s what normal people do in empty houses they come across in the woods.”

To illustrate its uniqueness, according to Rathbun, the ballet contains musical pieces from other classical ballets, including Cinderella, Coppélia and La Bayadère.

Rathbun continues to build her repertoire. At age 16 she attended the Rock School for Dance Education in Philadelphia, then joined with the Washington Ballet two years later.

Claire Rathbun sat down for a conversation in the company’s rehearsal space, in the basement of Robinson Memorial Presbyterian Church, 126 S. Terry Road.

How many times have you performed Snow White?

Only once, but I remember it well. Now I’m guesting as the lead, which is pretty cool. I’m familiar with the dwarves’ choreography, but I never knew Snow White’s part.

It’s great to be back. I’ve been so busy the last three or four years, so I never had the opportunity to come back and really perform in the productions. Living in New York City and being able to create my own schedules, it’s more convenient for me to come up if needed.

How are you spending your time down there?

I’m a freelance dancer now and auditioning for a Broadway show. I’m trying to get into that realm and taking acting classes with The Barrow Group.

I’ve been a professional dancer for about 4 1/2 years now. I still take ballet class four times a week.

I was recently in Little Dancer, a pre-Broadway show. Before things go on Broadway, lab productions have to be done. It was directed and choreographed by Susan Stroman, who has done just about everything. (Stroman won Tony Awards for The Producers, Show Boat, Contact and Crazy for You.) I was the understudy for the lead role and had a part in the ensemble. This was for about four months and just ended in December.

I’ve been taking part in more musicals with focuses in dancing and singing, although I’d love to get into plays at some point and strictly act. It’s all pretty exciting, but it can be tiring.

Is there something you struggle with?

Singing. It’s similarly technical to how ballet is. Singers train their voices their whole lives. I have not. There are things I have to remind myself — how to breathe, where to place my tongue, posture — because everything affects vocals.

In the last show, The Nutcracker, I was Dewdrop. I had to pull off these consecutive turns. It’s easy for me, similar to walking down the street. On stage I just fell out of it. It’s never happened before, but I couldn’t stop and afterward I had to shake it off.

What kind of roles or productions attract you?

Currently there seems to be a lot of typecasting. In recent auditions, they’ll line people up, they’ll look at your headshots and you in person. You can be asked to leave or they’ll call your name and will ask you to come back into the room simply based on how you look. If I wanted to play a mom, it’s not that I couldn’t play the role, but I look too young.

I really want to be in Cats. I love the dancing. It’s fulfilling and a combination of ballet technique with contemporary. The music is so vibrant. It’s a work in progress for me. (Laughs.) Also, they have understudies for the understudies. They always have people on staff. Eventually they’ll need more people to cycle in. We’ll see.

Which role would you play?

The white cat, Victoria, because she’s the ballerina. She does a lot of high extensions, and she doesn’t have to sing that much.

When you prepare for a role, how does ballet differ when compared to a musical or stage production?

Ballet is very technical. When you’re performing in a ballet, it’s all about practicing your steps, posture and making sure your body is in shape for it. It’s something I’ve done my whole life, so I’m accustomed to it. I have to make sure my pointers are set backstage and the choreography is learned. You have to be aware of where everyone is on stage at all times, and everyone else has to know where you’re going to be.

I think performing ballet helps strengthen a person’s core, and this makes transitioning into other forms easier. It’s difficult, though. With ballet your posture is pulled up and you use your back muscles a lot. More modern forms are down and using a plié. For example, in Hamilton or Cats the choreography is more contemporary and jazz.

I’ve been taking more ballet classes to help build my stamina. There are solos I have to prepare for; they are different than musicals, because I’m not singing, but it’s the same idea of being prepared. It’s definitely difficult, but I don’t think it will be bad.

Acting on stage and in film is more dramatic than ballet. You don’t talk, so you have to focus on more subtle movements and facial expressions. Aside from a few pantomimes, movement is reserved, which, I think, is amazingly beautiful. We’re trying to tell a story without words.

What do you find difficult?

Any type of performer can relate. What you have on stage is not what you had in the rehearsal room. You may feel great the night before a performance and then something happens: The shoes feel weird, then your feet start feeling weird, you may slip, which could cause something else to occur. Anything can happen. There is a lot of internal beating yourself up and thinking about better executions, but it’s allowing yourself to get over these mistakes.

Have there been any moments where you wanted to hang up the pointe shoes, walk away and pursue other creative avenues?

Last year, my second year with the Washington Ballet, I was injured. I was thinking: What am I interested in? Would I get into public relations or human resources? Would I pursue something where I could work with kids?

I’d miss ballet. I feel it’s something I was meant to do, and the desire to perform would never go away.

A friend of mine and I want to create some of the dance scenes inspired by those seen in the movie La La Land. It got me thinking: Maybe I’d like to do choreography some day. There are so many things to consider after your career as a dancer is over, including choreographing or one-on-one coaching.

I love it! I remember being a kid and seeing the older girls come in the room, and they’d be on pointe. I remember seeing the professionals and being so enthralled with their skills. I was, like, teach me your ways!

The kids practice for about a month before the professionals come in the week of the show or when they can make it. They come up and have their ways of doing things, and the children can feel overwhelmed, because it may not be the same thing they practiced. But they take direction so well. Every person in this school is so hardworking and devoted. With having a couple weekends off, I’ve been able to come up and help map things out.