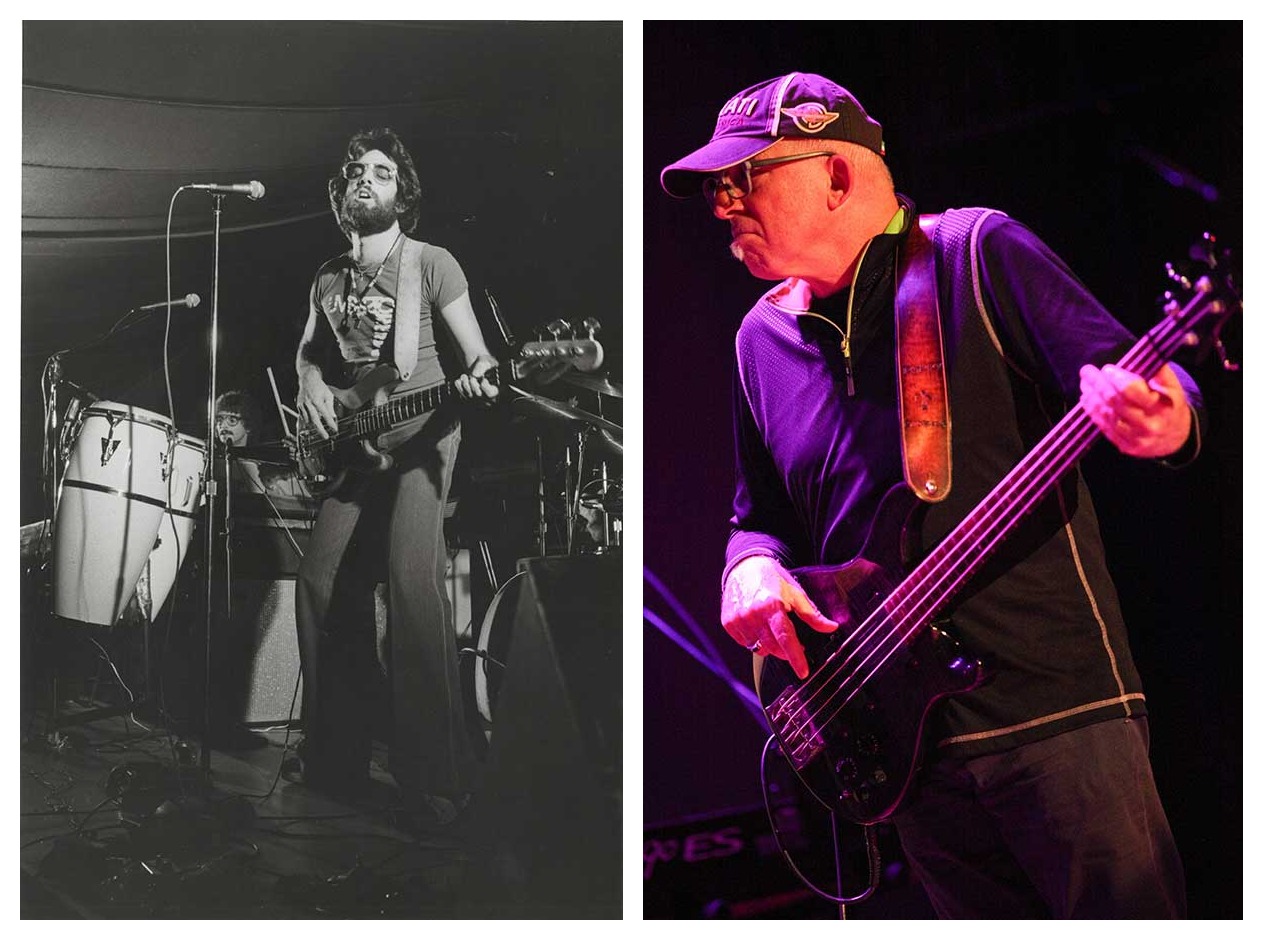 Over the past several decades, Syracuse-born songwriter and electric bassist Rick Cua has emerged as a shining star of the Christian rock scene. Cua, 69, now lives in Franklin, Tennessee, where he and his wife, Diana, are on staff at Grace Chapel.

When the talented bassist first dipped his toes into the music biz, however, he was playing at somewhat less-hallowed venues, such as North Syracuse’s Red Rooster and Erie Boulevard’s Soo-Lin.

“After a short but fun season with a band called Those Guys – Victor Sansone, Vito Iudice, John Searles and myself – The Campus Walkers was my first really memorable band,” Cua recalled in a recent telephone interview. “We played soul music, things like ‘Soul Man’ and ‘Ain’t Too Proud to Beg.’ That band, with Ricky Chisholm, Chuck Lago, Micky Nicotra, Tommy Rozzano and Bob Stasko, we had a ball!”

In fact, besides Cua, Halligan will be the busiest musician on Sunday’s bandstand. He’ll also fill in for the late Larry Arlotta on sets by Dove, C.R.A.C. and Sparrow. And he’ll helm a mini-set by Ceili Rain, a band he formed with Cua’s help in 1995, also featuring fiddler Diamond Joe Davoli and drummer Cathy LaManna. Rick Cua hangs out at the Soo-Lin restaurant in the early 1980s. (Michael Davis/Syracuse New Times)

While Cua still owns a cherished 1964 Fender Precision Bass, which he bought new more than 50 years ago, over the years he has plugged in Rickenbacker, Ampeg and Framus Star basses into Fender bassman, Ampeg B-15, Sun and Acoustic 360 and 371 amps. These days, he has a Boogie 400 tube head and a Gallien-Krueger rig.

“I usually don’t fly with the Fender,” Cua admitted, “so unless I get brave I’ll have a mid-80s Paul Reed Smith with me. That’s mostly my travel bass.”

But he remembers playing an old upright acoustic bass in his high school stage band and sometimes for the first set of Larry Arlotta Trio gigs at the Red Rooster on Route 11.

Cua’s work with Arlotta led to the formation of Dove, which grew wildly popular on the Thruway circuit in the early 1970s. The quintessential quintet also included flutist and lead singer Howie Bartolo, guitarist Larry Serafini and drummer Dave Hanlon.

Last March, Dove was inducted into the Syracuse Area Music Awards Hall of Fame and headlined the Sammy Awards show at the Palace Theater. The band’s covers of David Bowie and Jethro Tull material like “Suffragette City” and “Cross-Eyed Mary” instantly turned the Palace into a pulsating discotheque.

About 1974, Dove evolved into C.R.A.C.: Chisholm, Rozzano, Arlotta and Cua. They were later joined by guitarist Ron DeRollo, then the late Duane Walker and Matt Greeley. Percussionist Emedin Rivera was added soon after. DeRollo cannot attend Sunday’s show, but Rivera will be there to thump the congas and recall opening for acts such as Ramsey Lewis, Tower of Power and K.C. and the Sunshine Band at the Onondaga County War Memorial. C.R.A.C. released two singles, “Live Music” and Cua’s composition “Of the Lites,” and an LP titled All for You followed in 1980.

Hall will be on hand for the reunion of Sparrow, which also starred Cua, Corcoran, DeRollo and Rivera. Sparrow will perform its best-known tune, “I Don’t Want to Hear It.”

Ron Wray, aka the Syracuse Music Authority, helped organize the Cua tribute. “It took us three and a half years to pull this together,” Wray said. “Ricky’s a busy guy! But I think this show will well represent the early years of his career.”

After playing here with Sparrow, Cua joined The Outlaws in 1980. That Southern Rock outfit enjoyed a Hot 100 hit with its cover of “(Ghost) Riders in the Sky” during Cua’s time with the band.

In 1983, after scoring two Gold Records with The Outlaws, Cua left the band to dedicate himself full time to contemporary Christian music. Like most Italian-Americans, Cua was raised Roman Catholic, attending Our Lady of Pompei on Ash Street on Syracuse’s North Side and later St. Daniel’s in Lyncourt and Blessed Sacrament in Eastwood.

He married his Henninger High School sweetheart, Diana Circello, in 1970, and several years into their marriage, she accepted Christ as her Savior and spent the next five years praying for Rick to do likewise. Her prayers were answered shortly before he began plucking bass for The Outlaws.

Being born again, Cua said, “was pretty simple. You have to accept the Lord as your personal Savior, you acknowledge that you’re a sinner and ask forgiveness, ask Jesus to come into your life and then just try to do your best. God’s always there. It’s not a supernatural event, necessarily.

“As a child, I always had a sense of who God was, even though I didn’t really know Him,” Cua explained. “I always had the conviction of the Holy Spirit. I also believe that long before I made a serious commitment to Christ, He had His hands on my life.”

“It’s same Jesus, the same God, the same Trinity,” he said. “But being born again gives you a very personal relationship with God. Salvation is a free gift from God.”

As a Christian rocker, Cua has notched six No.1 songs, such as 1982’s “You Can Still Rock’n’Roll,” and nine Top 5 hits plus a Dove Award nomination.

His album titles make his Christian commitment clear: You’re My Road, Wear Your Colors and Songs to Live By. Two discs, Can’t Stand Too Tall and Midnight Sun, climbed up Billboard’s Top Contemporary Christian chart. Celebrating his 25th year in ministry in 2007, Cua released his 12th album, Won’t Fade Away.

“A lot of the songs I write have a worship slant. It’s what I’ve done for years,” he said. “It’s a natural thing. They will be congregational but will also be energetic and pretty vibey. Musically, the recordings rock with appropriate aggression and always have an uplifting message.”

Nowadays, he’s an ordained minister at Grace Chapel in Leiper’s Fork, Tennessee. (gracechapel.net), but Cua still feels drawn to the concert stage. “I love to get out and play, I really do,” he said. “I love talking and teaching about worship and songwriting and wrapping the Word around all of that.”

Recently, he has been playing live dates with Blues Counsel, a combo that began in 1987 as the unnamed jam band at the Kingdom Bound Christian Music Festival near Buffalo. Blues Counsel blends blues, rock and a touch of Latin.

The sextet includes Cua’s former C.R.A.C. bandmate Emedin Rivera and guitarist Tony Hooper, who will sit in on several sets Sunday. Hooper — not to be confused with The Strawbs’ founder of the same name — first worked with Cua on a mission to Italy in 1996 followed by session work on Cua’s albums. Blues Counsel’s newest recording is Slow Demolition (independent).

As they approach their golden wedding anniversary in 2020, Rick and Diana Cua continue to reside in the Volunteer State. They have two daughters, a son-in-law and two grandchildren: Niki, Nina, Todd, Luke and Eva, respectively.

The son of the late North Side guitar guru Buz Cua, Rick has always felt family is important. But his commitment to spreading God’s word extends to the entire human family.