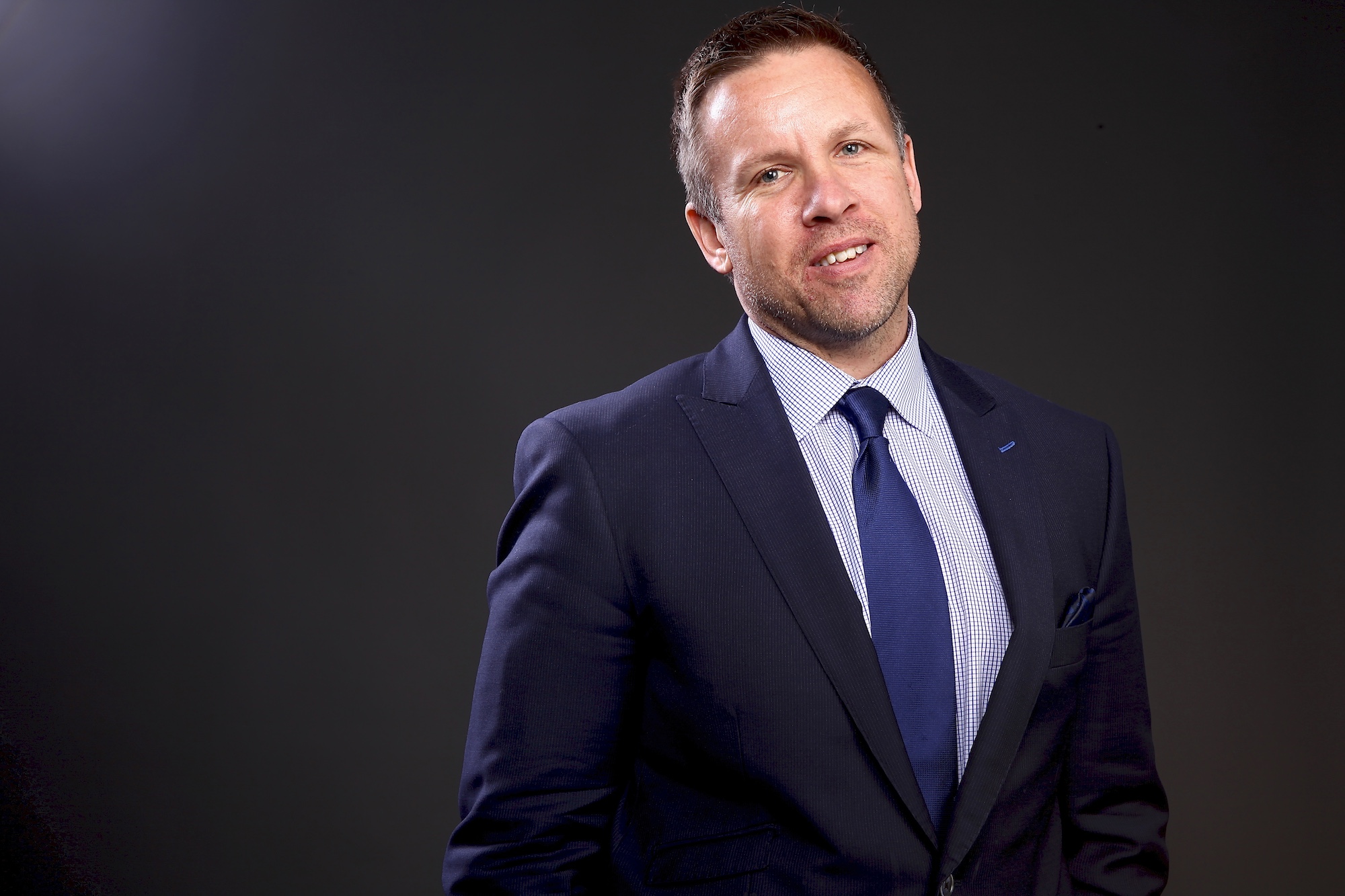 Libertarian mayoral candidate is having fun along the campaign trail.

Chris Fowler grew up in DeWitt, graduated from Jamesville-DeWitt High School and Salisbury University, traveled for several years and came back to town in 2009 to create Syracuse First, a network of locally owned independent businesses.

Some of the tools in his current campaign for mayor seem odd: a matchbook-sized poster on the checkout at one of the Freedom of Espresso shops; and an iPad he carries to introduce anyone who will look and listen to 137 ideas about arts and culture, job development, transportation and public spaces, all in the hopes of eliciting their ideas in return.

“I think I can win,” he says, “but my life is not attached to the outcome.” Mostly, Fowler says, he is having fun. Chris Fowler: “If we can (metropolitanize the city and county governments) correctly, I would like to say that I’m running to be the last mayor of Syracuse.” Michael Davis photo

He has gathered the requisite 1,000 signatures for a slot on the September Democratic mayoral primary ballot, for the most part on his bicycle, but last week he decided to withdraw from that race. He is concerned that the citywide contest will focus mainly on party politics as the candidates challenge each other’s petitions.

Besides, he has the ballot line of the Libertarian Party. He hopes his stance will inspire future candidacies from bus drivers (his dad drives for Centro) and wait staff (his mom does tables at the All Night Egg Plant). He is especially seeking votes from people who believe that Syracuse has a future way better than most folks can imagine.

The primary function of the mayor of Syracuse is to create a healthy, vibrant, sustainable, durable economy. Create a sense of place where people want to be. To be an inspiration. To be an ambassador. To build a culture in City Hall. To bring people who believe in our vision into City Hall.

If we can do it correctly, I would like to say that I’m running to be the last mayor of Syracuse. We have too much in terms of duplication of services. We have been historically disappointed with the fees and the taxes and the costs when we talk about how hard it is in Syracuse to start a business or be successful.

One of the ways to deal with that is to reduce the layers of government. I think there are more than 200 different taxing authorities, and lighting districts, fire districts, water districts, special districts that account for a lot of cost of being successful here in Syracuse, especially as a locally owned independent business, which is my major focus. Here’s the threshold that we continue to have to push up against. There’s complaining about it and doing something about it.

I think there’s a real opportunity with modernization to be bold and move into a 21st-century government organization. We’re closer together than we ever have been, but the irony is that we’re also further apart. We’re very disconnected: The city and the county are competing in ways and there’s real distrust that exists between people that live even blocks away from people in the city, and they almost pretend like it’s a different world. That’s something that has to be tackled and the political will to be able to do that is something that has to be part of that discussion.

Along the same lines, there is good reason for considering a countywide school district. But I actually think that as much of an issue as where students are being taught is how students are being taught. There certainly are some advantages to being in one school building over another. But how we approach the education system hasn’t changed in almost a century. It was created after the industrial revolution and we are still so married to that system.

If we really want to figure out how to transform the outcomes and really enable education and learning and just give people an opportunity to have their best life, we need to change the way we start the whole process.

We have students, especially in our urban areas, that are dealing with issues that adults should be dealing with. The levels of anxiety and stress that 5- and 6- and 7-year-old kids have is unbelievable. If they were to be diagnosed today in the 1950s they would be considered psychotic.

It’s more than what the school district looks like. It’s how we think about treating and educating our students. And here again, the idea of risk and fear of changing this dynamic is something difficult to overcome. It’s going to take a lot of work. But if we’re serious about making Syracuse a world-class city, empowering people to have better lives, this is part of the solution.

Teachers need to understand where these kids come from. One of the programs I would implement is a take-your-student-home day. There’s often a very linear relationship between students and teachers and it’s from when the school day starts to when the school day ends. And it’s hard to fully understand what a student is dealing with during that time if they don’t know what’s happening the other times of the day.

Trust is such a critical feature there. And the trust between teachers, students, administrators, parents and the public is nonexistent. And we need to bring it back together, and that’s educating the whole student from start to finish.

Also, educating them in ways that engage them. A good friend of mine runs a program at Case Western, one of the best medical schools in America. They’ve moved away from the traditional classroom setting: arrive by the bell, leave by the bell. It’s understanding how people take in information these days, how people best learn, and going to where they are and teaching them. What’s better? Try to fit people into a box or engage people?

And for kids through grade 12, inspire them. Activity and creativity are the key elements for students to care. The cost is way too high to have 17 different school districts in the county. The more important question is how do we build trust and connectivity and how do we find out how to teach, not where to teach. I’m glad you asked. Route 81 is the route of all opportunities in Syracuse. It’s an environment that tells the aspirations of the city. When the way a city is built and the way people move around, it lacks the idea of expedient getting out, it makes cars a priority over people. We need to utilize this opportunity that Route 81 presents to do more than just talk about whether it needs to come down or it needs to be a tunnel or it needs to be a rebuilt highway.

My thinking is undoubtedly it has to be a street grid. But you need to take a bigger step forward than that. We need to utilize this opportunity to create a comprehensive transportation and movement plan that allows for options of mobility throughout the city of Syracuse beyond just a car.

So one of my goals will be to reduce transportation spending by city residents from where it is now, just under 21 percent of a Syracuse resident’s annual budget. I would like to get it under 10 percent in the next eight years. That would mean they have a lot more resources to invest in themselves, to support locally owned businesses, to do things that improved their quality of life.

Eighty-five percent of all dollars spent on transportation, especially cars, leaves not only the local economy, not only the regional economy, but often the American economy. And we’re not even talking about the most important thing, which is climate change, the environment.

The fastest way you can fight climate change and protect the environment, especially the clean air and clean water we have in Central New York, is by taking people out of their cars. That means public transportation, protected bike lanes, walkability, ride shares.

Cities, especially downtowns in cities, are little petri dishes of opportunity. Syracuse has a lot of room for advancement in this regard. We’ve done some things, but even as we sit here today there are 50 empty storefronts in downtown Syracuse alone. In Armory Square, which most people in our community consider to be a vibrant neighborhood, there are almost a dozen empty storefronts and some of them have been empty for years.

How do you construct a city where people want to be? One of the projects that I would start on right away is the redevelopment of Clinton Square. Who will pay for it? I would model it after Bryant Park in New York City: create a partnership, government institutions, local businesses, philanthropy, work together, come up with a plan how to better utilize that space. Make it a space where people want to be, not just for festivals, but on a daily basis.

Your first few questions lead into that. If you’re able to get some of these things accomplished that you talked about, we’re going to make a significant dent in that considerable concentration of poverty. That’s something to take very seriously and be very concerned about.

But it can’t be addressed monolithically. Poverty is the result of a lot of things, a lot of bad choices, for our young people, our situation as a post-industrial city, the outcomes of our school district and back to the idea of mistrust that exists in our community between institutions, neighborhoods and families. The sense of hope that should exist in communities doesn’t exist there. The ability to aspire to something more than what’s around you becomes more difficult. You have to inspire people to connect and have an opportunity to have the best life that they can have.