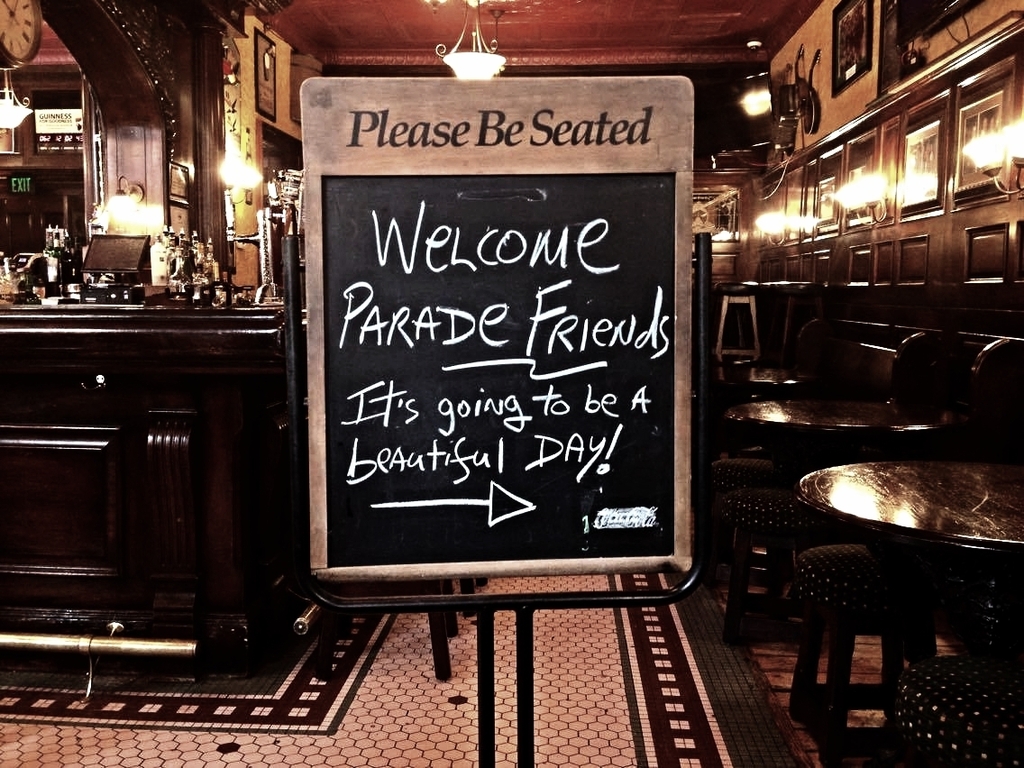 Syracuse gets prepared for its St. Patrick’s Day festivities. Come Saturday, March 12, 2016, the 34th Annual Syracuse St. Patrick’s Day Parade will be venturing through the streets of downtown. Aside from the Grand Marshal and Gael of the Year, the yearly promotional poster and route, there isn’t much different this year when compared to year’s past. That’s what makes traditions what they are, and Central New York will be celebrating its Irish community in proper fashion.

Speaking of proper fashion: David and Cindy Hoyne once again welcomed the preceding ceremony to take place within Kitty Hoynes‘ warm walls for the announcements, exemplifying hospitality with a coffee, tea, soda, bread and more. The theme of this year’s celebration is “The Fabric of Our Culture — The Fabric of Our Community,” which is attributed to the material products — woolens, tartans, etc. — of the Irish heritage.

The poster showcases this too. The one-and-only “upside-down” traffic light, unique to only Syracuse, is displayed within a background outline of Ireland. Atop, within the green light, is a plaid pattern, symbolic of the culture and families. On Thursday, Jan. 14, PEACE, Inc. executive director Joseph O’Hara was proudly announced as Grand Marshal of this year’s parade, and New York State Court of Claims Judge Nicholas Midey was named Gael of the Year. Both gentlemen’s contributions go well beyond their professional work ethic. The naming of the Rose of Tralee will be named down the road, and this nomination honors a young woman from the area who has established a notoriety through outstanding service to her community.

“This is not just a half hour parade,” Midey said. “I’m glad to have been a part of it for years.” The judge has been a strong supporter of the Syracuse Hunger Project and has provided pivotal support in many of the behind-the-scenes work for the parade. O’Hara, who has been a part of PEACE, Inc. since the turn of the century, is a member of one of the larger and notable Irish families in Central New York, as he is one of 11 children. His late oldest sister, Maureen, is honored yearly in Marcellus with the Teal There’s a Cure 5K run and walk, raising money for Grace’s Garden and ovarian cancer research and education. After her passing in 2012, last year’s race was the first time her name was formally attached to the event.

“I want to remember my family … and we owe a great debt to Nancy Duffy and Tom Higgins,” O’Hara said.

Friday, Feb. 26: Parade Applications Due — It was stated: Don’t assume you’ll be in the parade this year if you were included last year. Registration is important, and just showing up doesn’t make matters better.

Friday, Feb. 26: Irish Night with the Syracuse Crunch — A portion of the ticket sales will benefit the Syracuse Hunger Project, and fans are encouraged to bring non-perishable food items to donate.

Sunday, Feb. 28: Irish Night with the Silver Knights — A portion of the ticket sales will benefit the St. Patrick’s Hunger Project, and fans are encouraged to bring non-perishable food items to donate.

Saturday, March. 5: Shamrock Run — The week before parade day is a run day. The four-mile Shamrock Run kicks off  at 11 a.m., at Burnet Park.

Friday, March 11: Grand Marshal Celebration — Taking place at the former Hotel Syracuse and soon-to-be Marriott Downtown Syracuse. Please note: This is the only time and opportunity the hotel will be open to the public before its grand opening. It will be closed parade day.