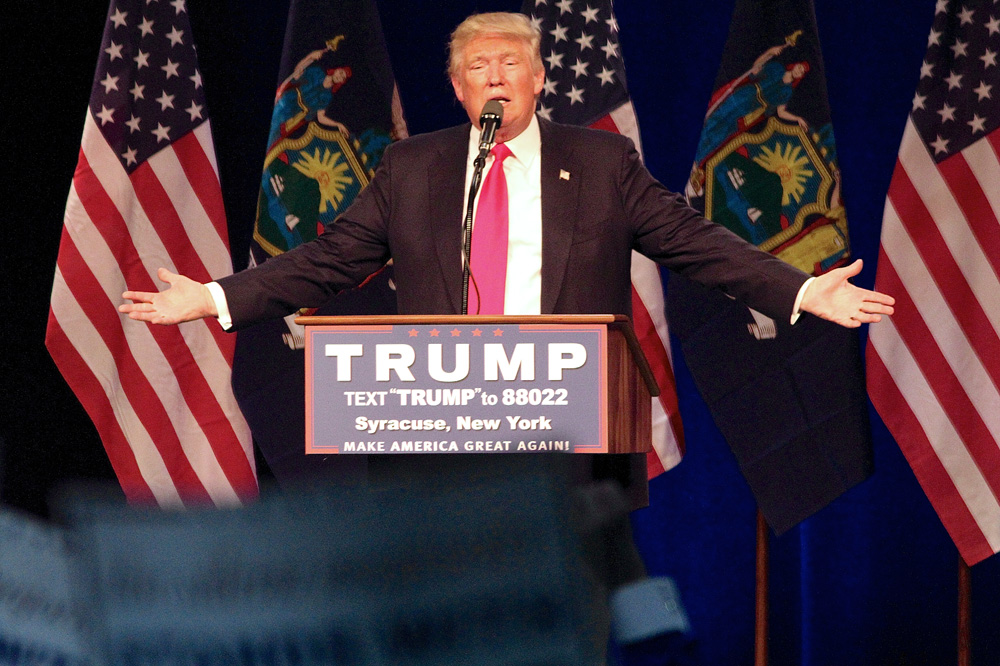 Donald Trump faces an uphill battle if he plans to steal New York.

Donald Trump has an obvious reputation for making extreme and often hyperboled statements throughout his campaign. But one of his overlooked and more fascinating ones has been his repeated claim that he can carry his home state of New York in the general election. While the Empire State and its rich 29 electoral votes are usually all but ignored by Republican candidates seeking the White House, Trump surprised many by earning the Republican nomination, and it has many wondering if he could actually pull it off.

Now, it’s a special time for the state. New York is back in the presidential spotlight for the first time in nearly three quarters of a century. Its April 19 primary was the beginning of the end for the campaigns of Bernie Sanders, Ted Cruz and John Kasich. Now for the seventh time in American history, it is poised to send either native son Trump or adopted daughter Hillary Clinton to lead the country, the first time since Franklin Roosevelt that a New Yorker has done so. Interestingly, Roosevelt also went up against a fellow New Yorker in the contest for his final term in 1944.

While his home state didn’t appear on his recent list of 17 states that he will focus on in the coming months, it isn’t like Trump to just allow Clinton, often called a “carpetbagger,” to walk all over his own backyard. He isn’t the only one to suggest this either. As Donald Trump Jr. put his father over the threshold of needed delegates to win the nomination at the Republican convention, he said “we’re going to put New York into play this time around.” And on Monday, former House Speaker Newt Gingrich told the New York delegation in Cleveland that Trump has a good shot of winning their state. But if Trump tries, he faces an incredible, if not downright impossible battle.

At a glance, New York is about as blue as can be. Democrats dominate the state legislature and fill the seats of its governor, both U.S. senators, a large majority of its congressmen and all of the mayors of the state’s ten largest cities. And a Republican presidential candidate hasn’t carried New York in a general election since Ronald Reagan’s landslide electoral victories in 1980 and 1984. There’s a reason for this. When it comes to registered voters statewide, Democrats outnumber Republicans 2-1.

New York is also a leader in neo-liberal politics. It has tough gun control laws, a statewide ban on hydrofracking, was the sixth state to legalize same-sex marriage and the second state to pass a plan to reach a $15 minimum wage. Indeed, Gov. Andrew Cuomo has even said that extreme conservatives “have no place in the state of New York.”

But it’s not just the politics of the state itself; it’s who Trump is running against. Though she’s relatively new in town, Hillary Clinton remains a popular figure here. She was elected as a senator in 2000 and re-elected overwhelmingly in 2006. She won the Democratic New York primary by 17 points over then Sen. Barack Obama during her first run for the presidency in 2008. And she beat Bernie Sanders by 16 points in the primary this spring.

So, can Trump compete with that? The short answer is no. For now, New York is still a Democratic stronghold in a presidential election. Now, that doesn’t mean that the billionaire businessman won’t do well here. He won 61 of the 62 counties during the state’s Republican primary. But Trump has his eyes on the upstate region, which is much more rural and much more conservative than New York City and the immediate vicinity. The 2014 gubernatorial election is a modern strong model for the upstate/downstate political division. While Democrat Cuomo won the election handedly, he actually won only eight counties in the entire upstate region. That said, those counties contained the big cities of Buffalo, Syracuse, Binghamton, Albany, Ithaca and Plattsburgh, so large populations even in the upstate area usually lean Democratic.

But one of Trump’s main talking points, that bad trade deals have taken away jobs, is going to and has already resonated throughout the upstate region, perhaps more than many think. Though New York is not often considered part of the industrial Midwest, the Rust Belt’s eastern border stretches along the Erie Canal path through the state, from Buffalo to the outskirts of Albany. That area, where manufacturing jobs have evaporated over the last few decades, is going to be prime real estate for Trump in November.

But Trump’s insistence that New York is in play may actually be more of a mind game than anything for his opponent. If his campaign puts any kind of effort into the state, it may force Clinton to pour valuable time and money into a state that Democrats shouldn’t be worried about. She’s already going to have to do more than usual to defend states that make up Obama’s Midwest firewall, like Michigan, another member of the Rust Belt that Trump says he will actively campaign in.

That strategy might be smart, but its effectiveness in winning an election is probably energy that could be used in other means. If Trump is serious about winning the White House, it would be wise for him to surrender the Empire State and look elsewhere. New York is simply beyond his reach.