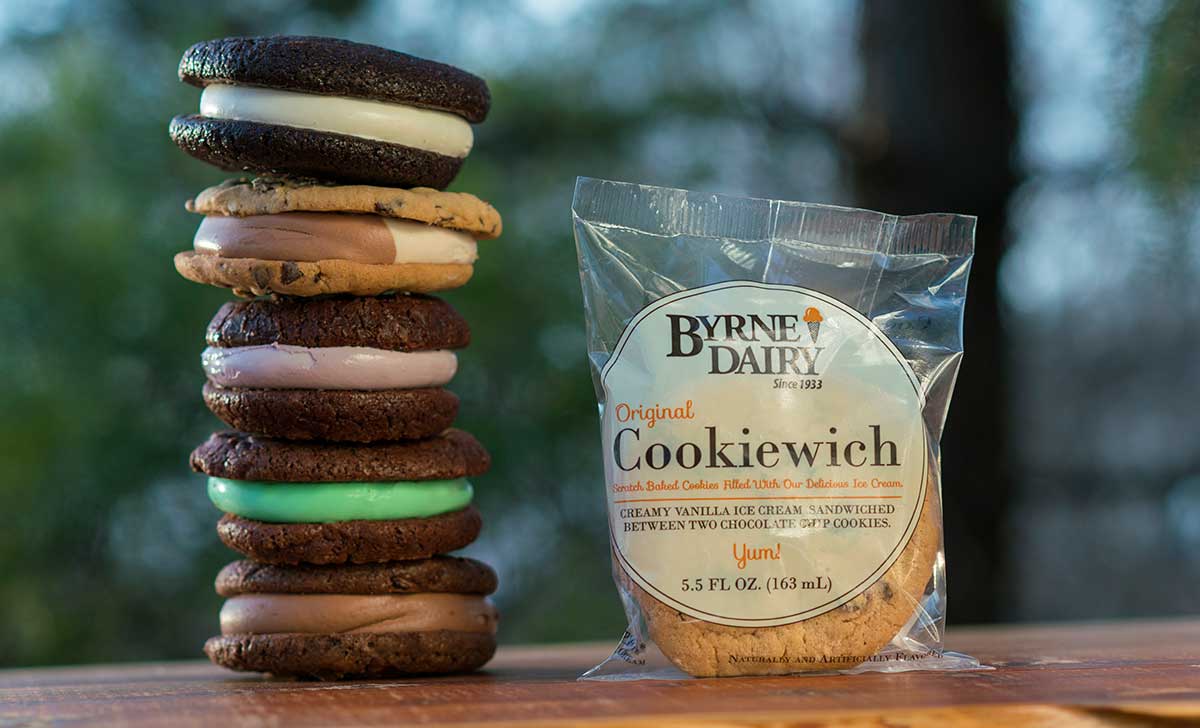 What’s a Cookiewich, you say? If you have to ask, you’re missing out on something tasty and local.

Spring is here. Celebrate with a Hofmann hot dog or two on the grill and a side of salt potatoes. For dessert, make it a Cookiewich.

What’s a Cookiewich, you say? If you have to ask, you’re missing out on something tasty and local. The Cookiewich is a frozen dessert made with Byrne Dairy soft-serve ice cream sandwiched between two homemade chocolate chip cookies.

Byrne Dairy, founded in 1933, is perhaps best known for its milk, (still available in glass bottles) chocolate milk and mint milk. Cookiewiches are churned out by the thousands at Byrne Dairy’s Ice Cream Center on Cortland Avenue in Syracuse and sold at the nearly 60 Byrne Dairy convenience stores across upstate New York, as well as in other stores, including Walmart and Costco. Despite their mass production and widespread availability, they are essentially a handmade product.

Kimberly Rossi, media manager for Byrne Dairy, describes the Cookiewich as “literally a farm-to-table product,” beginning with the flour for the cookies (from Birkett Mills in Penn Yan) and extending to the ice cream, made with fresh milk trucked in from the network of farms Byrne partners with in Central New York, many within 30 miles of the ice cream plant.

The Ice Cream Center is in a building that was originally a Sears garage/auto center, behind the former Sears department store on South Salina Street. Lowell Lewis, a 35-year Byrne employee, says he remembers both the garage and the building’s former life as a baking facility for Byrne Dairy stores. All manner of baked goods — cookies, muffins, doughnuts and Danishes  — were baked on site.

The baking operation is now handled by Sonbyrne Sales, Inc., a separate company that manages the Byrne Dairy gas and convenience stores. The Ice Cream Center is used to produce “Mighty Fine” ice cream, frozen yogurt and sherbet and novelties like the Cookiewich.

As is the case when baking at home, the cookies do not come out perfectly uniform. “We want the cookies to have that homemade look,” Rossi says. The cookies are baked in tall commercial ovens that can turn out about 1,400 cookies at a time.

After baking and cooling, trays of cookies move down a conveyor to be filled with soft-serve ice cream. Bakery manager Bruce Williams watches as a fellow employee methodically takes cookies from the tray, fills their flat side with a mound of chocolate-vanilla twist soft-serve ice cream and places another cookie on top. Each Cookiewich contains about three ounces of ice cream, Williams says.

In a matter of minutes, the employee sends a tray of two dozen hand-formed Cookiewiches down the line to make its way through the freezer tunnel, where they are flash-frozen before packaging. The liquid nitrogen “tunnel” is one of the newer additions to the Ice Cream Center, Williams says.

Before its arrival, Cookiewiches needed to spend about 24 hours in a freezer before packaging. The freezer tunnel speeds the process up greatly, and Cookiewiches are ready for packaging in about five minutes.

Each Cookiewich is wrapped individually before being boxed by hand in packages of six, 12 or 24. From there, the ice cream treats spend more time in a walk-in freezer, before being loaded in trucks and delivered to Byrne Dairy shops, big-box stores and other venues throughout the region, out of state and in other parts of the country.

The Cookiewich is positively Central New York — and its own thing. In some circles, it’s a popular treat for kids on the last day of the school year. At Colgate University in Hamilton, the Cookiewich plays a part in the admissions process: Prospective students and their families who tour the campus receive a Cookiewich upon completion of their visit. A friend who works in the local food business and has easy access to all manner of desserts and baked goods declares the Cookiewich “my favorite treat.”

Here’s a tip from a Cookiewich connoisseur: For best flavor, remove Cookiewiches from freezer and allow them to thaw a few minutes before eating/serving.