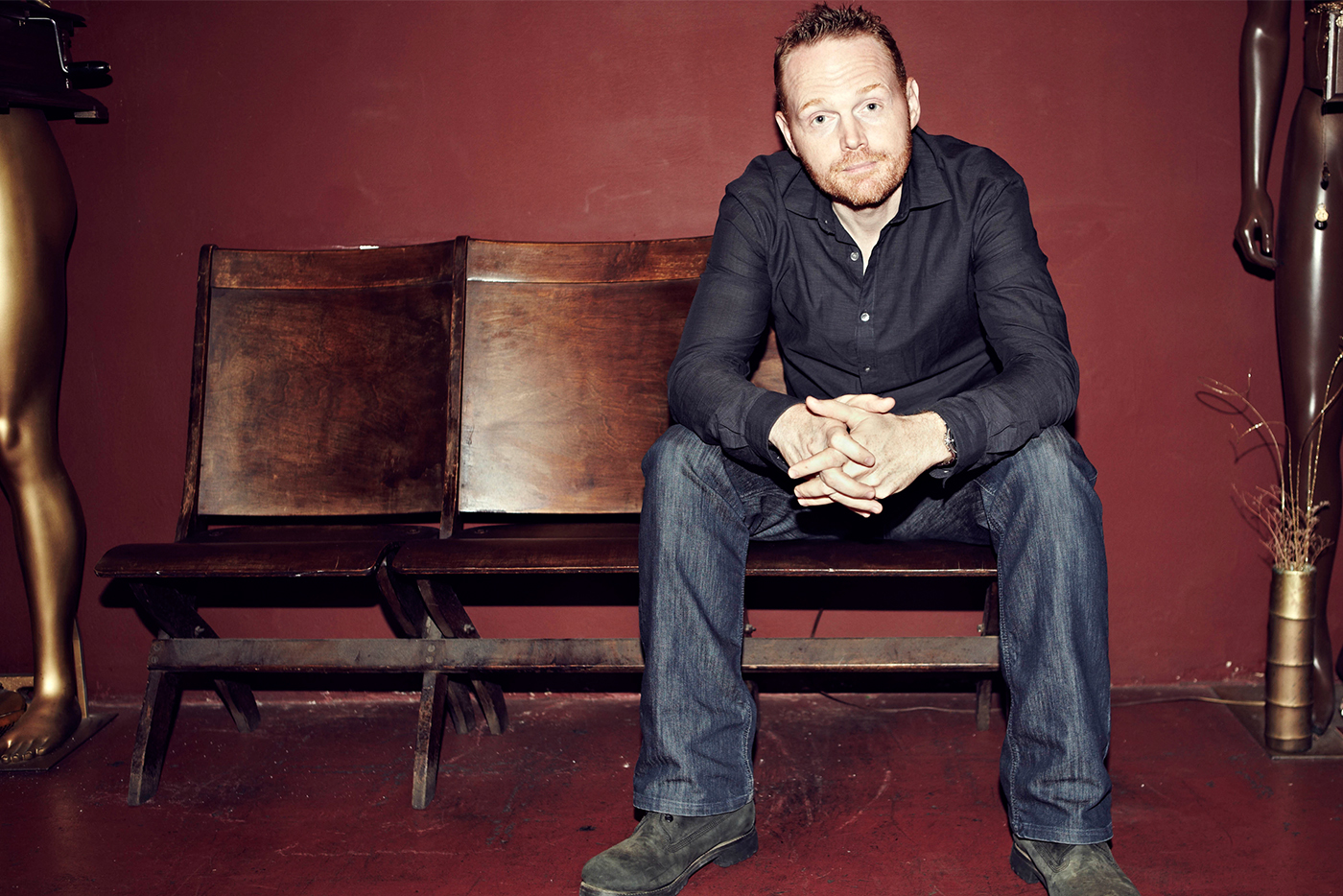 Bill Burr discusses his career ventures prior to Syracuse gig.

Bill Burr is a comic force to be reckoned with. The former Boston-area comedian, a Los Angeles resident for the past nine years, has been in the business since the early 1990s. Burr has made his rounds as a guest on television and radio shows, plus he hosts his weekly Monday Morning Podcast. His specials can be found on DVDs and on Netflix, including his 2014 I’m Sorry You Feel That Way. Burr is also writing and producing the Netflix animated series F is for Family, which has been renewed for a second season of 10 episodes.

Is life on the West Coast better than on this side of the country?

They’re both great. Massachusetts has four seasons, four professional sports teams. Living outside the great city of Boston, and all its characters, is amazing.

Out here in LA, it’s beautiful weather and some of the most talented and cool people I’ve ever met: writers, musicians, actors, animators. This city gets a real bad rap. There are a lot of people who come out here, and it doesn’t work out for them. They leave and they’re either bitter, if they didn’t get too far, or they only got to hang out with desperate psychos.

You worked in a warehouse before deciding to tell jokes. How did that come about?

I was watching a bunch of stand-ups, and I was working in a warehouse with a guy who also wanted to try stand-up. Once I said this out loud, I realized it wasn’t a crazy dream. He said he was going to sign up for an open mike. If that’s all you had to do, I was going to do that, too. Thank God; if I didn’t run into that guy, I don’t know what would have happened.

It was an out-of-body experience. I remember walking up and taking the mike out of the stand, and I felt like I was watching myself. It was weird. It was a feeling of the beginning of something substantial in my life, which it obviously turned out to be.

Being referred to as a controversial comic, do you think over time topics of race, gender, sexuality and others will be less controversial?

No. I don’t even think they are controversial. These people who belong to groups and get offended, there is a strategy to the way they get offended. It makes me not want to take them seriously. It’s not truly being offended, it’s a business move. It’s as if a comedian has to be at a certain level of notoriety. They’re not going to hit the wagon of someone nobody knows, because it will have a less chance of going viral.

Comedians tell jokes every day to millions of people around the friggin’ world. One person gets offended, and the news jumps all over it. There is nothing at stake: It’s an easy story. They’re not going to talk about the heroin epidemic, or genetically altered food. They’re fuckin’ with their own money. God forbid someone does a Caitlin Jenner joke in a strip mall. It’s not to say a comedian can’t be wrong, but that’s between them and the audience member, and how the situation is handled.

How did the concept of F is for Family come about?

It came about through telling family stories throughout my career on stage, and just figuring out the best way to do it. If you do it in live action, having kids beating up other kids, there would be a lot of issues with that; people would complain. That’s how I grew up: Big kids beat up little kids. (Laughs.) I got beat up a lot, and, you know, parents were a lot different in good and bad ways.

Did you have any inspirations to help guide your direction for the show?

I always loved South Park. They’ve always done the best social commentary, coming up on 20 years now, and I feel sometimes that show gets taken for granted. Matt (Stone) and Trey (Parker) are absolutely brilliant.

Through years of trying to get stuff on the air, my stuff has been considered too edgy, too sexist, too mean, this is encouraging this, what are kids going to do when they see this. I was frustrated. Shows like South Park, Family Guy and The Simpsons get away with a lot more.

When you see a comic go from stage to TV, their level for funny, for me anyway, seems to drop. Sometimes it’s a little bit; most of the time it’s substantial. You’re put into a world of advertising and overly sensitive people. Very few people within the sitcom format, like Jerry Seinfeld and Ray Romano, were able to stay as funny as their act.

In the second episode of the first season, there is a jab at Syracuse and two people going there were called cheap. Was this intentional?

No, we weren’t making fun of Syracuse. We bounce around with names of cities.

The people that animate the show are from France. If you create a show through a French company, their government gives a grant for it being an animated show and for doing business with them. It’s less expensive. To get the grant, they give you a giant list of things they want in a show, and we had to pick two. One was a European character (Mr. Holtenwasser, a Holocaust survivor), and we can’t say the show takes place in the United States.

You also have an excellent cast for the show.

There is a specific theme for every episode, but there is an ongoing story. I think that’s great.

Thank you. That was Netflix’s idea to serialize it. This brings the writing up to another level.

What’s cool is the characters are going to age a little with each season. Every season is three months of their lives, so we can stay in the early to mid-1970s for a good five seasons. I feel the disco 1970s have been done to death and exaggerated. I was about 9 or 10 when disco hit, and people weren’t immediately walking around with giant collars. The only time I saw that was on the TV or Saturday Night Fever. Not everyone had a lava lamp or a pet rock.

Which do you prefer: acting or voice acting?

There is fun in both. What I really prefer is the writing and participating in the stuff that I get to say. That’s what I’m really loving about F is for Family. It’s always great to have a new joke, but when you come up with something you feel works and makes people laugh, even when doing this for 24 years, it’s still one of the greatest feelings.

Is it difficult writing jokes for stand-up or for the show?

No, I love it. It’s a ton of work. I love storytelling, writing dialogue and coming up with scenes. I’m almost fighting how much I love it. Anything that ever messes with my stand-up schedule, I’ve considered to be a major risk, but this is just so satisfying.

Is your Monday Morning Podcast an outlet to rant and ramble or flesh out ideas?

I don’t really flesh out ideas. Once I put them on the podcast, I feel like they’re already gone. If there is more meat on the bone where I can turn a minute or two of ramble into a chunk of material, I’ll do it, but it happens rarely. The podcast is current and topical. It’s a way for me to honestly act like an idiot.

Is it difficult tailoring material or does it come down to timing?

It’s all of those. I’ve been doing this now for so long, it’s almost second nature. I’m thinking: Is this hacky? Is this stuff I already said, ground I’ve already covered? With a special, you don’t want to be doing more of the same. Criticism like, “He’s still talking about the same shit.” I don’t want to be that guy.

At the end of the day, I am me. My interests are still my interests. I just try new things to expand my interests. Since my last special (I’m Sorry You Feel That Way), I got my pilot’s license, and I’ve been flying helicopters. This hasn’t given me any material. It’s a real serious thing.

As fun and as cool as it is, I try to be as meticulous about it as possible: making my radio calls perfect, flying at the right speed and altitude. Each time I try to improve from the previous time. It’s one of the two things that slows my brain down. The other is smoking cigars.

For me anyways, it’s about getting better with my interests, whether it’s as a comic, playing drums, the voiceover stuff. It fights off boredom. Boredom is not good for my creativity. I also have tendency to slip into a mild depression if I’m not moving forward.

I used to look back. You know, being sentimental and going back to places you used to be. If the business is still going, no one is there that used to be there. If they are, they’re older and different. That saying, “You can never go home.” Jeez, that would send me into a tailspin.