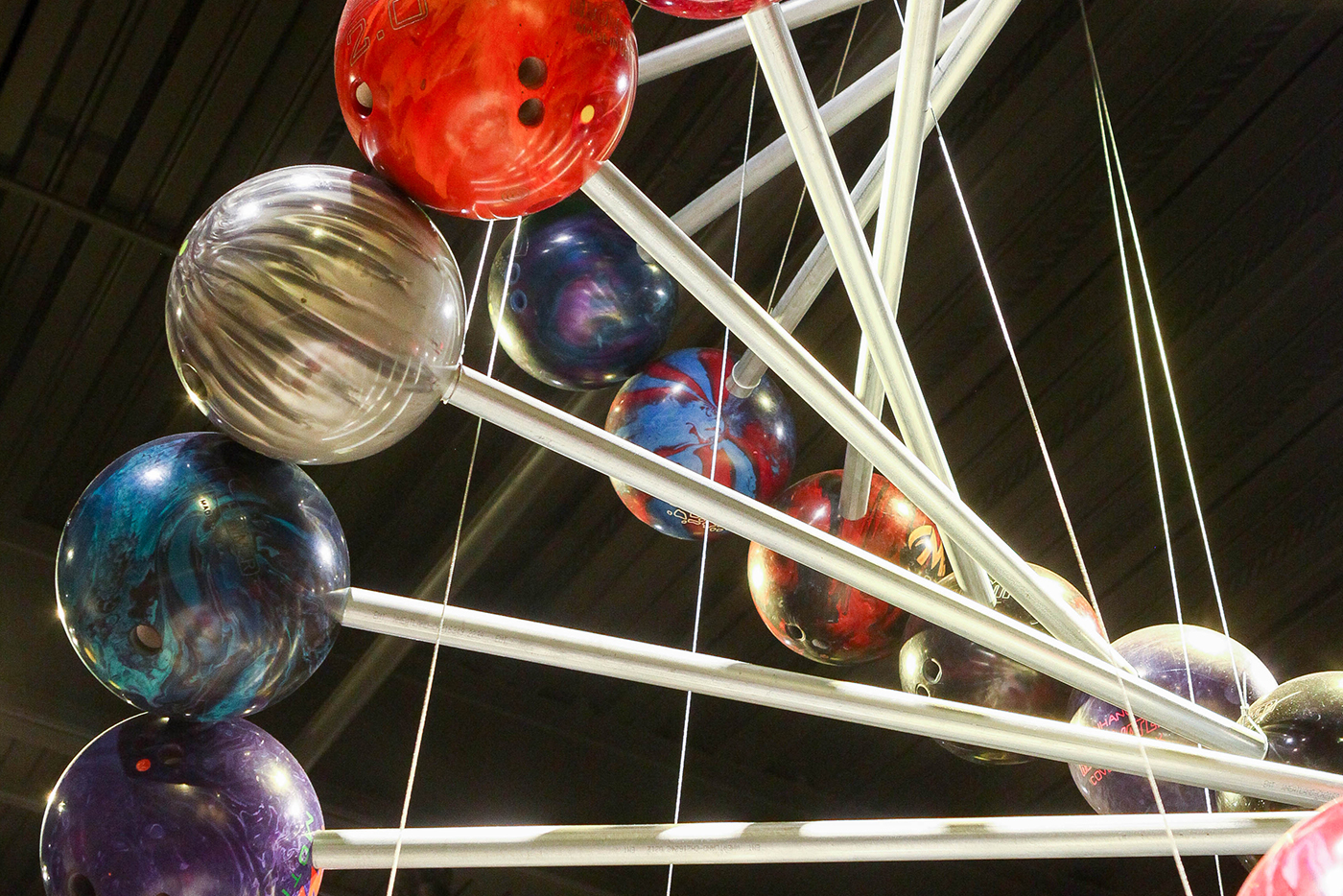 Mark Zbikowski’s love for bowling is entwined in his DNA.

When two of Mark Zbikowski’s worlds collided last winter, the outcome was impressive.

Zbikowski, a Syracuse University masters of fine arts candidate, combined his love of bowling with his passion for art to create his latest sculpture using 44 interlocking 15-pound bowling balls to form a 10-foot-high DNA strand.

Zbikowski’s concept to reinterpret bowling equipment took three months to complete. The 26-year-old Zbikowski debuted his masterpiece April 17 at the Museum of Science and Technology (MOST) in Armory Square. Zbikowski, who comes from a bowling family, wanted his artwork to be thought-provoking. He tied together bowling and art because both are in his blood. Zbikowski carried a composite average of 210 bowling in two leagues this past season.

“Bowling is a social activity,” he said. “My idea evolved into how the culture of bowling has been passed down from generation to generation in families. This piece illustrates how culture is embedded in our DNA.”

Zbikowski’s artistic vision also tested his skills in architecture and engineering as well as science. It was a painstaking process that took more than 200 hours over a three-month period last winter to complete. The process involved drilling the balls, assembly and repeated disassembly until his vision became reality.

“It was definitely a love-hate relationship over that time,” Zbikowski said. “There were lots of ups and downs. The agony of holding the weight of the balls was tough.”

To create his piece, Zbikowski received more than 130 bowling balls donated by the Syracuse bowling community. He used mostly resin cover stock bowling balls, which were visually more colorful and easier to drill.

Zbikowski built his piece in a fine arts studio on the SU campus. The structure was built with steel pipes and 7-inch-by-half-inch-wide steel rods to connect the bowling balls together. It was completed with 50 balls forming a DNA strand.

Then he disassembled the sculpture and rebuilt it for the MOST. Because of space limitations at the venue, however, Zbikowski had to remove six balls to display it.

“Seeing this structure come to life just like I envisioned it is incredible,” Zbikowski said. “This whole thing, it’s a lot like life in itself, like a DNA strand. And that’s what’s pretty cool.”