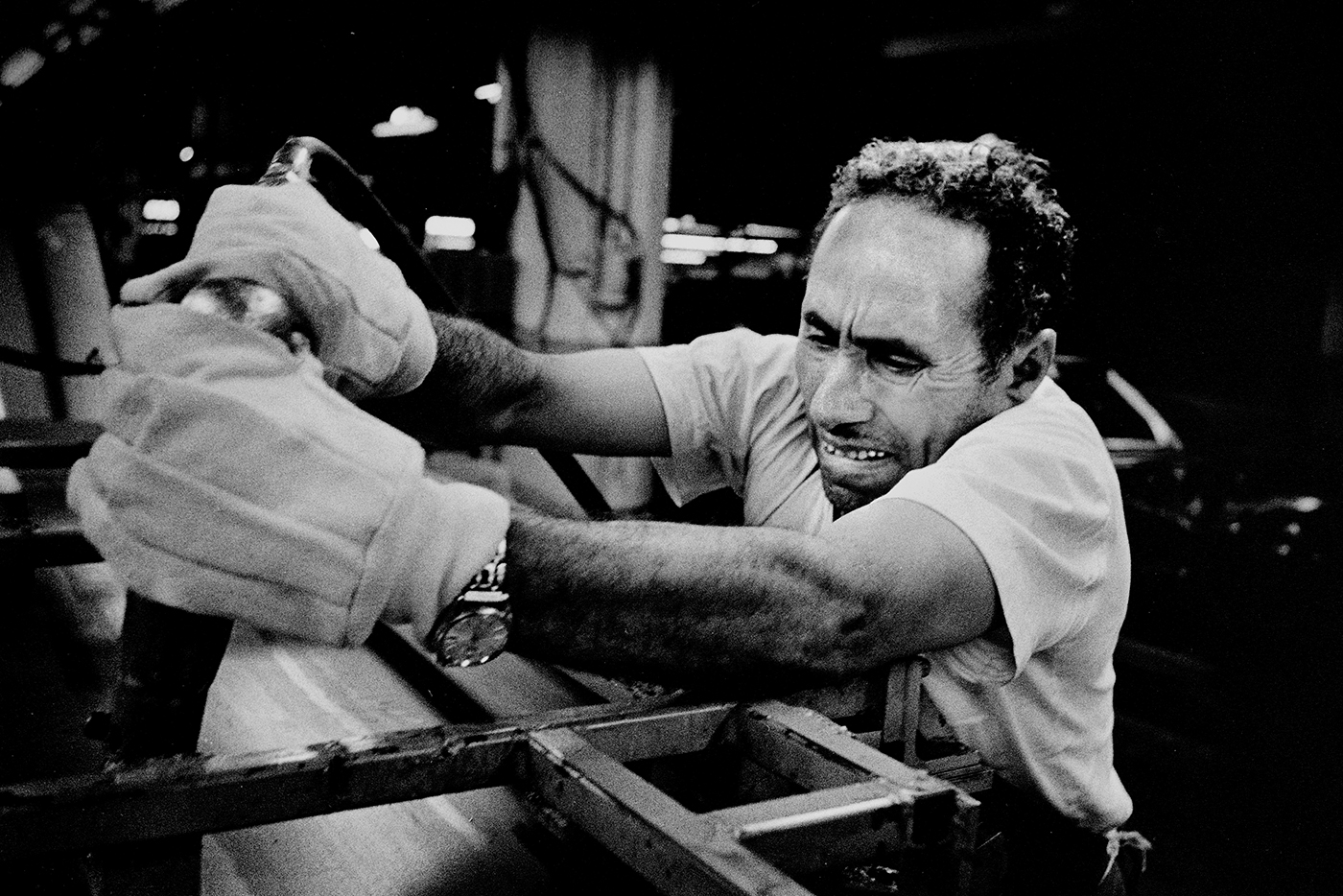 In a career spanning 48 years, Earl Dotter has long focused on one objective: documenting Americans at work. He’s shot autoworkers in Detroit, commercial fishing crews on the North Atlantic, coal miners in Appalachia, poultry-plant workers in Montgomery, Ala. Now he has 26 photos on display at the ArtRage Gallery, host for the exhibition At All Costs: Photographs of American Workers by Earl Dotter.

The most striking images emphasize the physicality of blue-collar labor. In a 1976 shot, an autoworker strains to install a roof rack as a car passes along an assembly line. At a hospital, three laundry workers wear gloves and masks as they shift through a mass of sheets and other bedding. A worker at the Montgomery plant grabs chicken parts and places them on hooks. It’s a task she will repeat many times during the workday. That pattern has led to repetitive-motion injuries for many workers in these plants.

Dotter, in his photos, has long discussed workplace hazards. Indeed, the current exhibit includes a portrait of Lee Hipshire, who spent 26 years as a coal miner and died at age 56. It also includes a 1978 image taken on the steps of the statehouse in Columbia, S.C., where cotton-mill workers demonstrated for worker’s compensation benefits for brown-lung health issues. And the show documents instances where workplace risk is mitigated by appropriate safety equipment. An inspector looking at an upper section of the Verrazano-Narrows Bridge is securely tied in by a harness. Similarly, a carpenter installing aluminum studs wears a helmet and faceguard.

Other images develop the concept of largely forgotten workers whose toil receives little attention but is absolutely necessary to meet consumer needs. Dotter has completed several series regarding farm workers, taking photos of apple pickers in Bridgeville, Del., and a crew harvesting broccoli in Aroostock County, Maine. That crew stands in the midst of a field where the crops go on for a long way.

Dotter, it should be noted, doesn’t merely discuss utilitarian aspects of work. He stresses the honor of labor and the pride taken by his subjects in what they do. He has photographed carpentry crews helping to rebuild the Pittsburgh airport and firefighters at Ground Zero after the terrorist attacks on the World Trade Center.

In addition, a 1976 image depicts three female coal miners. They were allowed to work underground only after the U.S. Supreme Court ruled in favor of women seeking employment as miners.

ArtRage has staged this exhibit in collaboration with multiple partners, including the Workers Center of Central New York and the Occupational Health Clinical Centers of Syracuse, Binghamton and Canton. The centers generated a second set of photos that hang on the gallery’s front wall and commemorate 41 people from upstate New York who died at work during 2016. Residents of the Southern Tier and Central and Northern New York, they include roofers, loggers and David Mast, a 9-year-old Amish boy who was driving a horse-drawn manure spreader.

The various images access a vast topic and can only touch on the workplace in a limited way. For example, the Dotter exhibit doesn’t discuss the closing of textile mills in South and North Carolina that resulted in thousands of workers losing their jobs.

Nonetheless, At All Costs deals skillfully with an important and often neglected subject. In a media realm where cat videos and celebrity sightings receive way too much attention, the show stakes out its own territory, concentrating solely on people working.