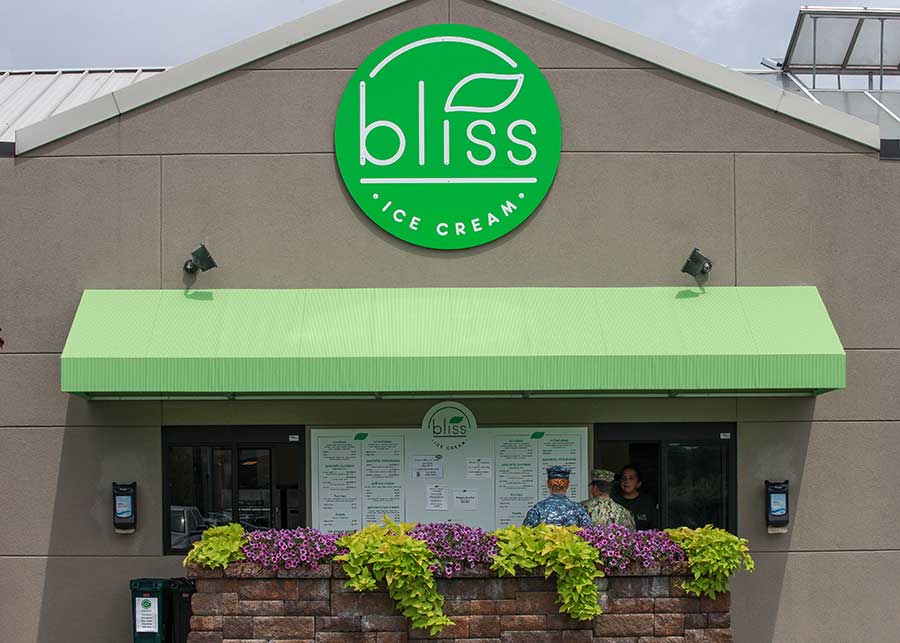 At least once a week, sometimes more, Molly Swartwood and her family pile into the car and take a ride from their home outside Auburn to Bliss Ice Cream in North Syracuse. It adds up to more than 50 miles round-trip, but it’s more than worth it, Swartwood said, for the vegan soft-serve ice cream.

“It tastes like cow cream,” said Swartwood, who became a vegan about five years ago. People who are vegan don’t eat meat, dairy or eggs. “It’s so creamy and delicious. I think it’s wonderful they are offering this option for vegans. The mileage is definitely worth it.”

Milk comes from cows, and so does cream. But supermarket shelves are now filled with a sizable array of plant-based milk alternatives. In addition to the popular soy, almond and coconut milks, you can find oat, rice, flax, quinoa, hemp, hazelnut, cashew and macadamia milks. There’s no shortage of dairy-free desserts in the frozen food aisle — and local ice cream parlors are stepping up to meet interest and demand, too.

Tess Lowe, the manager at Bliss Ice Cream, said it was a priority for her to offer vegan soft-serve ice cream at Bliss this season. She’s a vegan herself and said the struggle to find vegan soft serve is real. She has driven to both the Great Escape ice cream parlor in Watkins Glen and Vegan Treats, a vegan bakery in Bethlehem, Pennylvania, that also serves vegan soft serve, to satisfy her cravings.

Vegan customers are finding Bliss by word of mouth, she said; some visitors have come from as far as Binghamton. Bliss uses Temptation brand soy-based bases to make its vegan vanilla and chocolate soft-serve ice cream. The Temptation brand is a product of Chicago Vegan Foods, which also produces vegan hard-pack ice cream for restaurants and food service. Strong Hearts Café, 719 E. Genesee St., and Strong Hearts on the Hill at Syracuse University use the hard-pack ice cream, available in many flavors, for their popular milkless milkshakes.

About 85 percent of Bliss’ menu of shakes, sundaes, flurries and floats can be made with the vegan soft serve, Lowe said. Vegan cones are available as well.

Swartwood said her husband and mother have tried vegan flurries with Oreo bits mixed in, since Oreos are vegan. She’s more of a soft-serve purist. “I keep it simple and go with the vanilla and chocolate twist,” she said.

At The Ice Cream Stand, which relocated last spring to 200 W. Water St. near Clinton Square, owner Amanda Hughes offers more than a dozen flavors of traditional Gifford’s ice cream (plus a menu of sundaes, shakes and floats), vanilla and chocolate vegan soft serve ice cream made with a coconut milk base and usually a non-dairy fruit sorbet of some kind. The vegan soft serves can be “twisted.” A popular treat made with both regular and vegan ice cream is ice cream “Standwiches,” made with cookies (regular, gluten free and vegan) from Cathy’s Cookie Kitchen in Armory Square.

Hughes said vegan ice cream made with coconut milk has a distinct coconut flavor. She is in the experimental stage with vegan options and is looking forward to testing vegan soft serve made with cashew milk, which she uses at home and describes as ultra-smooth and creamy.

“There’s always a demand, always a need for vegan options,” Hughes said. “It makes sense for us to accommodate different dietary preferences. It’s nice for people who want or need to eat different to be able to do so.”

Beyond that, she said, it can be fun and refreshing simply to try something new. “You don’t have to be vegan to enjoy coconut or cashew or almond,” Hughes said.

Other vegan ice cream options include Dole Whip, a dairy-free soft-serve mix that comes in a variety of fruity flavors, including pineapple, mango, lemon, raspberry and strawberry. It is widely available at ice cream parlors in Central New York.