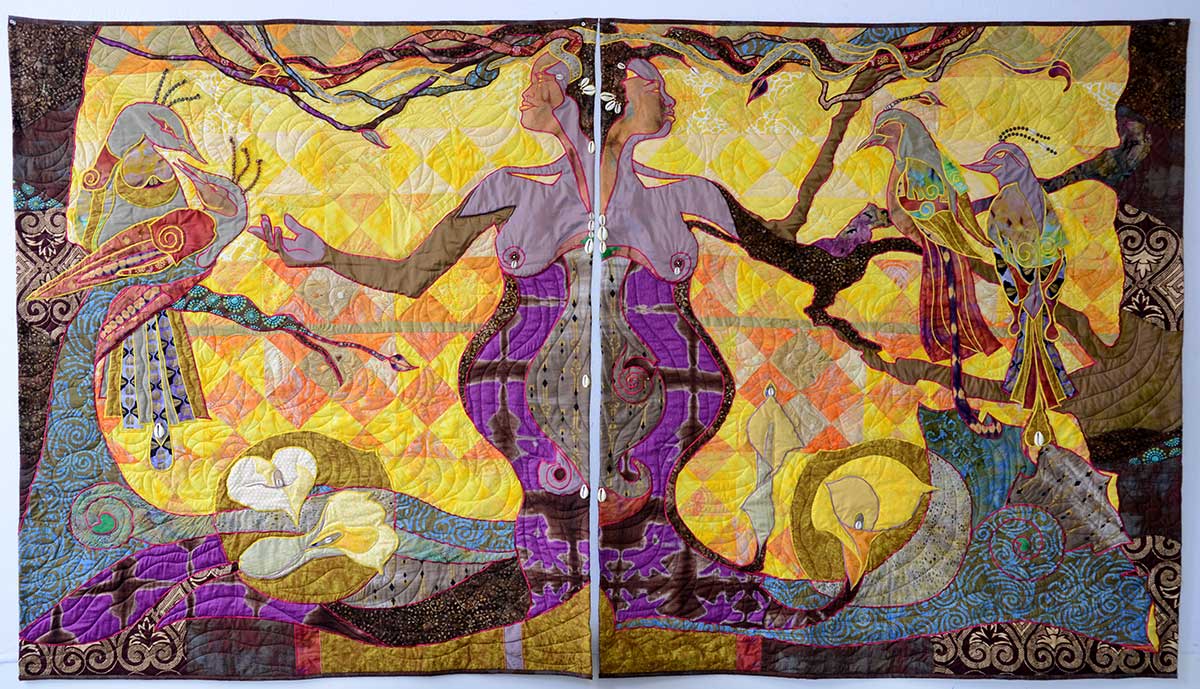 During a 40-year artistic career, Ellen Blalock has created numerous projects including a film documenting the travels of Beyond Boundaries, a local group, in Ghana; “The Last Series,” whose images deal with depression; and “The Fathers Project,” a series of photos depicting teenage dads. Beyond that, she’s made a large number of quilts, the focus for her current, one-woman show at the ArtRage Gallery.

Stitching Stories: Thread, Needle, Narrative: The Quilts of Ellen Blalock presents work made over the last 20 years. It encompasses quilts large and small, pays homage to ancestors, and demonstrates the artist’s ability to improvise with eye-popping colors and diverse patterns. It moves from “A Family Album” to goddess quilts, from a two-sided, huge quilt part of the CAGE installation to a new series, “Not Crazy.”

First, the quilts selected from “A Family Album” both embrace the artist’s family and document her penchant for variety. In a long, vertical quilt, a small image of Mary Rosebud Ellis, Blalock’s great-great grandmother, merges with a purple border and an extended depiction of a tree covered in fabric.

In “The Angel Quilt,” dedicated to the oldest sister of Blalock’s father, a female figure holds a baby. The quilt contains swatches of purple, red squares and a long, elaborate “belt” wrapped around many patterns.

A third quilt, “River of Knowledge and Death,” communicates a theme of remembrance. It combines a motif suggesting a stream, a figure in gray fabric that exists out of time, and a bird-like figure dominating the upper half of the quilt.

A small image of Mary Rosebud Ellis, Blalock’s great-great grandmother, merges with a purple border and an extended depiction of a tree covered in fabric.

The goddess quilts, meanwhile, are visual standouts in an exhibition that has lots of eye appeal. In “M’dusa,” the central figure, in black, is encircled by several snake shapes appearing in red and gold, green and other colors.

“Oshun,” a two-panel, large quilt honors the goddess of fertility, beauty and water in the Yoruba religion, which began in West Africa. Each panel presents a pear-shaped female figure, gold color, orange triangles and an elaborate border. Two birds, each depicted in great detail, sit on a branch of a tree decorated with distinctive patterns. Each panel can stand by itself; here, they are joined together to make up a larger work.

Stitching Stories also displays “Most Wanted,” one of three quilts from CAGE, a powerful installation that appeared at the Everson Museum of Art. It reflects Blalock’s experience as a photographer and videographer for The Post-Standard and Syracuse.com. She witnessed court hearings for young African American men being sentenced for drugs, guns and murder, covered funerals for people shot or stabbed, and documented makeshift memorials for victims. She has described CAGE as “a memorial for victims, the community, the families, the murdered, and the incarcerated to remember and to search for truth and to forgive.” “Most Wanted” reflects Blalock’s experience as a photographer and videographer for The Post-Standard and Syracuse.com.

And there are three quilts from Blalock’s latest project, “Not Crazy,” which focuses on mental illness and trauma, particularly in the African American community. The series calls for compassion and healing for veterans dealing with PTSD, for children exposed to violence at an early age, for survivors of incest and sexual abuse.

One quilt, “Teddy Bears, Monsters, and Lies,” deals directly with abuse. It depicts a man and a small child; he raises a finger to his lips, a gesture calling for silence. Several small figures, with features evoking monsters, appear in the work.

“Bang Bang, You Dead!” combines bright colors, two figures confronting each other, text in the manner of word balloons in a cartoon, and a third figure with the words “I’m Dead.” The quilt addresses the issue of violence in an innovative visual context, one with fabric portraits and a link to pop art.

Clearly, the series “Not Crazy” is still in the development stage; so far, Blalock has completed three pieces. Yet the quilts from the new series both provide an update on the artist’s work and further document her versatility. The exhibit is joyous as seen in quilts dedicated to Blalock’s son and other relatives, resolute based on her willingness to address difficult issues, sweeping as it considers work created over two decades. Finally, it focuses on the various ways in which the artist handles narrative.

Stitching Stories is on display through Jan. 12 at ArtRage, 505 Hawley Ave. In connection with the exhibition, “Quilt Stories: A Conversation about African American Woman Quilters with Francis Parks and Caroline Cargo” is slated for Jan. 6, 3 to 5 p.m. The event is free and open to the public.