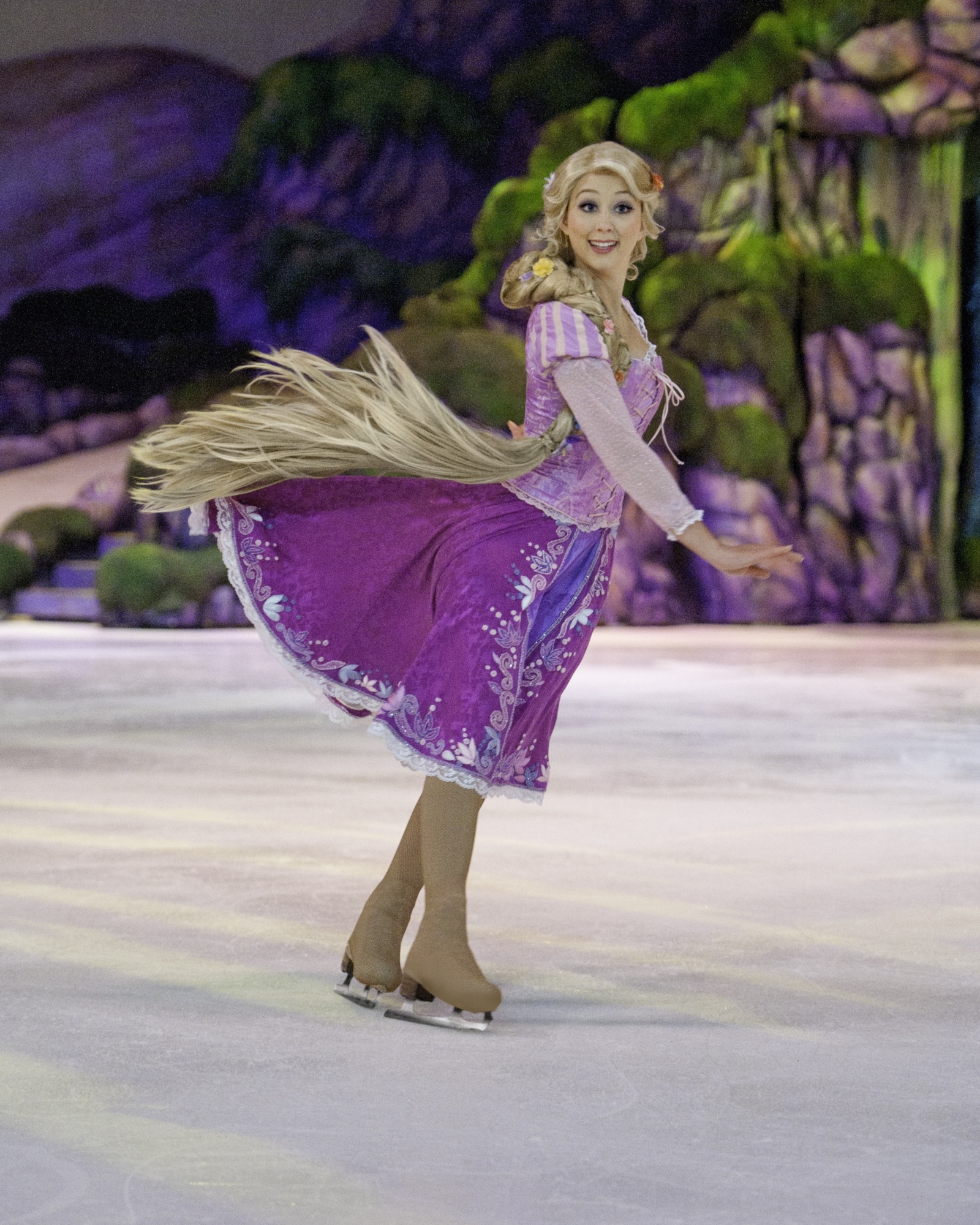 The show follows eight princesses from the Disney animated movie features — Ariel, Aurora, Belle, Cinderella, Jasmine, Rapunzel, Snow White and Tiana — jumping, lifting and twirling their way to adventure, as they attempt to make their ultimate dreams come true. Along the way they’ll meet other notables from the Disney franchise lineup, including Elsa and Anna from Frozen, Snow White’s seven dwarfs, Genie and Aladdin.

Skaters Bonard Muck and Tatjana Zaharjeva are living out their own real-life Disney fairytale. After meeting during the show nine years ago (Tatjana played Cinderella to Bonard’s Prince Eric), the pair began dating and have since married. In Dream Big Bonard and Tatjana will skate together as Flynn Rider and Rapunzel, respectively. The two were avid Tangled fans before being cast in their new roles, and they even had the film’s hit song, “I See the Light,” played at their wedding.

The duo spoke with the Syracuse New Times about their skating history, how they got involved with the Disney on Ice show and what makes each performance on the months-long tour a special experience.

How did you both get into ice skating?

Tatjana Zaharjeva: I started skating at age 4. I was an active kid, and my mom tried to put my energy in different sources, so there was dancing, gymnastics and figure skating involved. Figure skating was my favorite. It was going really well, and when I grew up a little bit they decided to put me in pairs. When I finished my skating career as a competitor I wanted to skate for myself, so I joined Disney on Ice.

Bonard Muck: Growing up in eastern Canada, ice hockey was second nature to everybody. So my parents put me in hockey in the beginning, but I felt it was too rough, and I really couldn’t even stand up on the ice. My sister happened to be skating at the time, and I thought, “Well, let me try that first before I get into hockey,” and that’s how I learned to skate. I enjoyed it so much I didn’t want to go back to hockey.

How long have you both been with Disney on Ice?

Bonard: This is my 17th year right now.

Tatjana: And for me, it’s my ninth year.

What was the audition process like in terms of what character you were going to end up portraying?

Bonard: We had one talent coordinator who works in an office in Florida, and she has the job of placing everybody in certain roles based on their skills, their look and everything like that. She has a tough job. She has to place quite a few skaters.

Do you try to audition for certain parts, or do you just show off what you have in your own choreography and they take it from there?

Bonard: You do an audition that would show off all of your best things that you can do. Occasionally you’ll get a private presentation with the performance director of the cast or the talent coordinator. And even when you show them all of your tricks they might say, “Could you do it like this?” or “Could you do that a bit more?” So they’re obviously kind of going, “You could maybe fit this role, so let’s see what you can play with that way.”

Tatjana: You really need to sell your animated side.

What’s it like having to skate in full Disney costume?

Tatjana: They measure us, so all of the pageantry, like the dress, fits perfectly. Because you do have to do the tricks —  we have to jump, we have to do the lifts — they try to adjust everything so it fits well.

Bonard: When they’re creating a show like this, they hire the cast based on their talents and their looks. So they have to work together with making the costume look like the cartoon, but also making it workable for us to do all of the tricks we need to do.

What is practice and daily life for you two like leading up to and during the shows?

Tatjana: Every week when we have an opening day we check the ice, because the ice size fluctuates every week; sometimes it can be thicker, sometimes it can be thinner. So we adjust to the ice, you check all your tricks, and then during the week we have open ice sessions where you practice, or you work on something else. On days off I like to hike. I’m not much a gym person; I’d rather be outside, so walking or hiking, that kind of thing. We do spend a lot of time inside the building, so I like to go outside on my days off.

Bonard: Being married to this lovely lady, we have a lot of the same likes and dislikes, so definitely getting into the outdoors. When we were touring the West Coast we went out into the Rockies. A favorite thing of mine is walking little downtown strips of every place we go, finding a nice little coffee shop and just sitting back and people-watching. It’s relaxing.

Are there challenges to putting on these shows that audience members may not consider?

Tatjana: The tours can go up to 10 months, so you definitely get tired. But as soon as you step out on the ice and see those kids who can’t even stay in their seats because they’re so excited to see you, you get these second or third or fourth winds and think, “Oh right, this is why I’m doing this.”

Bonard: We’re on the road quite a bit. We do it because we love it, and we get to share all these experiences together. Sometimes we get homesick, but the audience is never going to know that because we’re putting on a performance, and we’re getting energy from all those little kids who are smiling at us.

What stands out as a favorite aspect of the shows?

Bonard: It’s our job to put on the same show with the same energy every day. But one of my favorite things is that it’s almost not the same show. It’s always a different audience, and the energy they put out will be different every show. Little kids are coming dressed as Cinderella and Rapunzel and Elsa and Anna. . .

Bonard: And Olaf, yeah! It’s funny, I find that the children, even the parents, and the energy they can get from each other even amplifies that more. You’ll get a family over here dressed as Rapunzel, and you’ll get a family sitting beside them dressed as Snow White, and all of a sudden they’re best friends. And they’re dancing in the front row and they’re creating their own choreography. We’re doing our own thing out on the ice, and we can see them, and it creates such a show for us.

That’s what’s kept me going for so many years: my love for the sport and my love of performing, but the fact that you can pull so much energy from every audience. Especially audiences when you go to different countries around the world. In Japan, everyone is so quiet and respectful, you can hear a pin drop during the performance. But at the end they all get up and on their feet and they throw flowers, and it’s amazing. And I remember in places like Brazil and the Philippines. . .

Tatjana: You almost can’t hear the music, they scream so loud.

Bonard: The energy is so different everywhere, and that’s what we feed off of. It’s never quite the same.

What is your favorite Disney movie?

Tatjana: I’m going to go very cheesy right now: Tangled! I loved it when it came out, and I watched it in different languages. And even now when I have time off I’ll be like, “Let’s re-watch Tangled!”

Bonard: I’ll have to be cheesy, too, and agree. I think some of my favorites growing up were Aladdin and The Lion King. They still get to me, but I have to admit Disney put out a good one this past year with Moana. The music really gets to me, and it’s really fun. So I have a few of my favorites from the old and a few of the newer ones, too.

What should Syracuse audiences keep an eye out for?

Tatjana: The show is an amazing combination between the classic shows and the modern ones, because we have Cinderella and Sleeping Beauty and Snow White, where the parents can sing along, and then the modern ones like Tangled and Tiana and Elsa and Anna are there. So it’s a great combination of everything. And for the boys there’s an amazing segment from Aladdin where he comes down on a zip cart on ice. So it’s not just for the girls, it’s for the parents, it’s for the grandparents, it’s for the boys. It’s for everyone. Tatjana Zaharjeva as Rapunzel in Disney on Ice: Dream Big