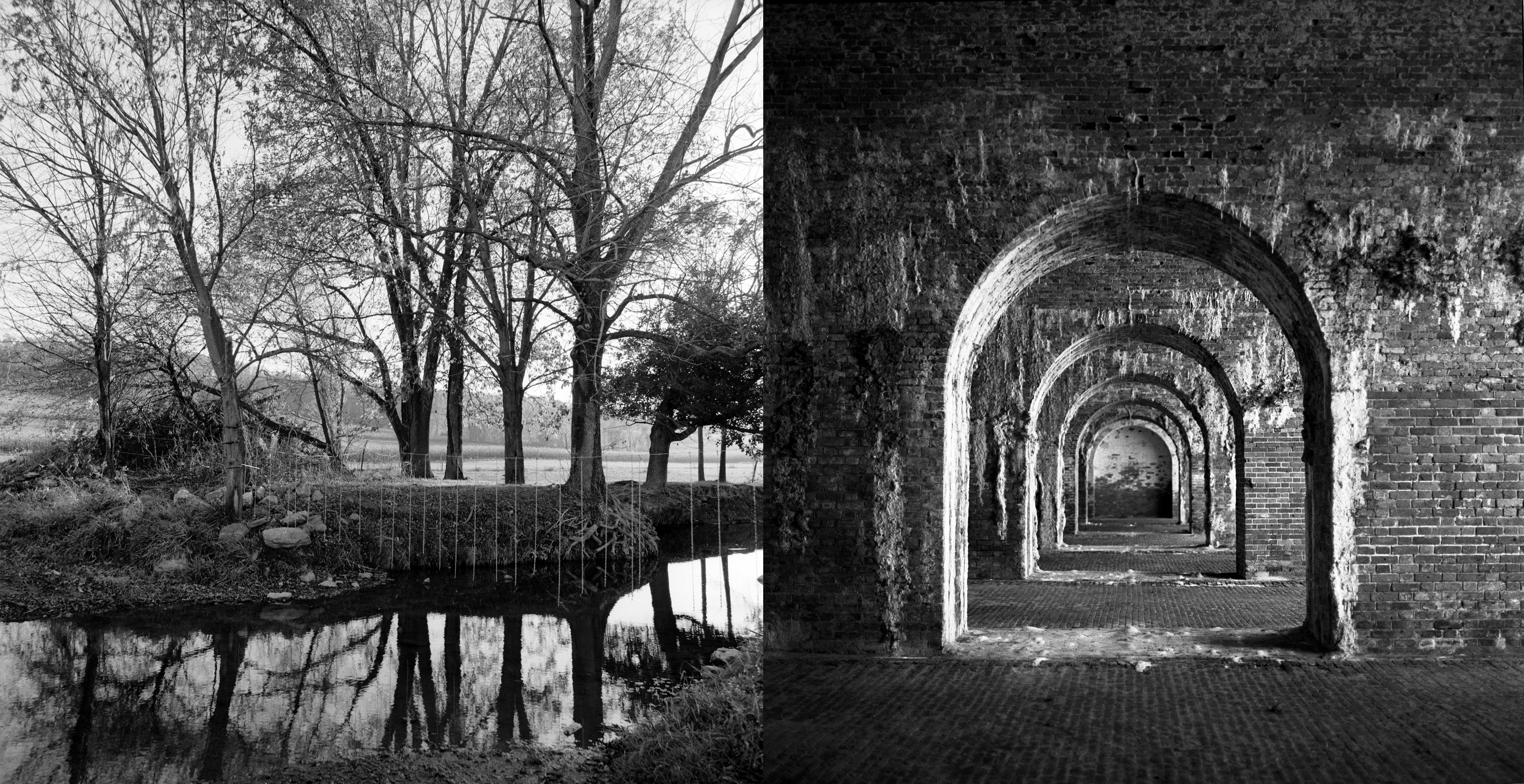 During a 30-year artistic career, William Earle Williams has photographed the Oswego Harbor, the ruins of Fort Morgan at Mobile, Alabama, and slave burial grounds near Bridgetown, Barbados, in the West Indies. He’s shot cemeteries, slave cabins and Forks in the Road at Natchez, Mississippi, where there was a large slave market for much of the 19th century. In his work, he combines multiple roles: documentary photographer, researcher and visual interpreter.

More than 80 images are on display at Syracuse University Art Galleries in a solo exhibit. A Stirring Song Sung Heroic: African-Americans from Slavery to Freedom, 1619 to 1865 is a large show encompassing photos from three major projects. Williams has photographed sites on the Underground Railroad, locales where African-American soldiers fought during the Civil War and other places associated with the history of slavery in the United States.

These aren’t bodies of work existing in isolation. Williams has an artistic vision, one based on the notion that various historical events have been obscured, forgotten or neglected. Thus, he’s shot contemporary locations that at first glance have little connection to the past.

In the instance of Forks in the Road, his image documents a rural intersection with a house, car and telephone poles. There’s no plaque or sign mentioning a slave market that once was the second largest in the South. Elsewhere, a photo depicts a green on a golf course at Beech Creek, South Carolina. The course occupies ground where a Civil War battle was fought. The battle site is unmarked.

Such images make up one segment of the show. Williams has also taken photos of buildings and artifacts that still exist today. In Norfolk, Virginia, he visited West Point Cemetery and documented a statue of William Harvey Carney, an African-American soldier who received the Medal of Honor for courage demonstrated during the siege of Fort Wagner, South Carolina. There’s also an image of St. James A.M.E. Zion Church in Ithaca, a stop on the Underground Railroad.

Williams clearly has built an in-depth portfolio by photographing numerous locations and doing extensive research. Thus, the exhibit has no problem exploring subjects like resistance to the Fugitive Slave Act of 1850.

In Syracuse, several hundred abolitionists stormed a jail and freed William “Jerry” Henry, who had escaped from slavery. He went first to Mexico, New York, and then to Oswego where he sailed to Canada. Williams’ photo documents the harbor at Oswego.

Another image documents the Parker Farm at Christiana, Pennysylvania. James Parker, an escaped slave, sheltered four fugitive slaves. When a posse arrived at the farm, a violent conflict ensued. Edward Gorsuch, a slaveowner and “posseman” deputized by a U. S. deputy marshal, was shot and killed.

And the breadth of Williams’ work allows him to show that slavery existed not only in Alabama but also in upstate New York locales such as Seneca County. He took a photo of the servants’ wing in the Rose Hill Mansion at Fayette, New York. Slavery was legal in New York state until 1827.

From another viewpoint, Williams is an artist who pushes the boundaries of documentary photography. At Gettysburg National Military Park, he shot a wheat field after harvest, at a time when only withered stalks remained. Yet the image acts as an elegy, a remembrance for those who died in battle.

In addition, his photo of Fort Morgan focuses on doorways, suggesting that they are portals to the past. And he enlivens a photo of a house in Fountain City, Indiana, by working with light and shadows. This was once the home of Levi and Catharine Coffin, conductors on the Underground Railroad.

His images are supplemented by a range of historical materials including a copy of the Emancipation Proclamation, a 1796 newspaper in which an ad offers $50 for the return of a slave, and a book by William Still, a writer, businessman and activist who helped many slaves make their way north from Philadelphia to freedom.

Finally, the exhibit both showcases Williams’ images and renews his ties to Central New York. He received his undergraduate degree from Hamilton College, was a visiting artist at the Light Work gallery at SU and also had his work shown at that gallery in 2003.