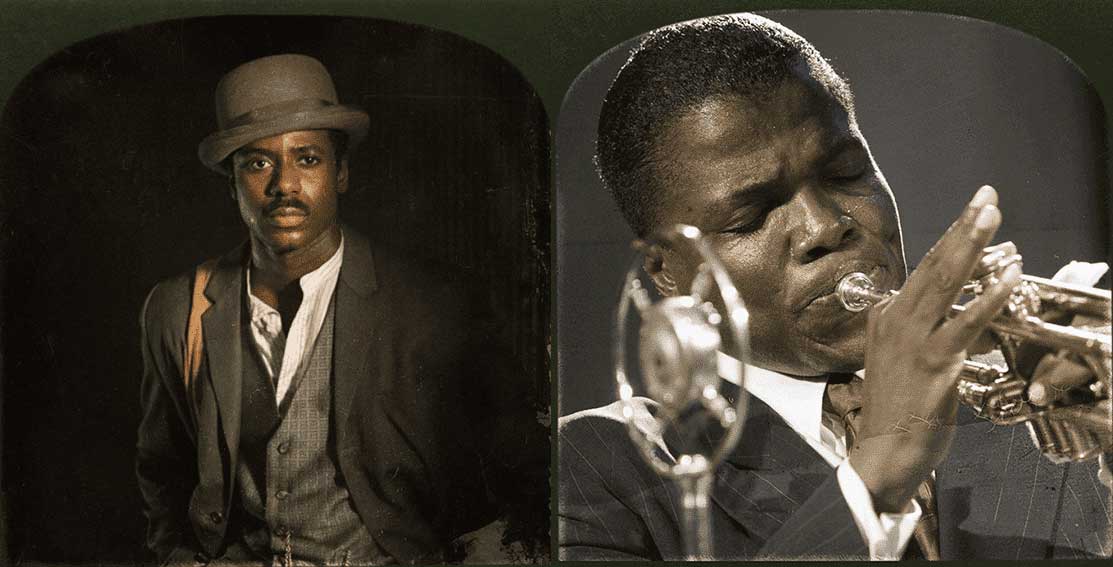 The movie Bolden, about the ill-fated New Orleans cornetist Charles “Buddy” Bolden, who pioneered jazz circa 1900, was originally scheduled for release in 2008. Six years later, the film lost its titular star and had to recast that primary role and reshoot countless scenes. In 2010, director Dan Pritzker hoped to have the flick in theaters in 2011. But Bolden remained mired in post-production for more than a decade.

Along the way, the fledgling film director — an heir to the family fortunes of the Pritzker clan which owns Hyatt Hotels — released a 70-minute black-and-white silent feature called Louis in which young Anthony Coleman plays Louis Armstrong as a child growing up on the outskirts of Storyville. Louis stars several actors, such as Jackie Earle Haley as a corrupt politician and Shanti Lowry as a prostitute, in the same roles they play in Bolden.

Louis premiered in Chicago on Aug. 25, 2010, with live musical accompaniment by Wynton Marsalis, pianist Cecile Licad and a 10-piece orchestra. That summer, the musicians traveled with the film to Detroit; Bethesda, New York; and Glenside, Pennsylvania.

Now Bolden is finally scheduled for its theatrical release on Friday, May 3. It will be distributed by independent outfit Abramorama, the company that reissued The Beatles’ 1968 cartoon feature Yellow Submarine last summer for a successful 50th anniversary run.

Shooting for both movies began in 2007 in North Carolina and continued in 2009 in both North Carolina and New Orleans. In 2014, Pritzker had to reshoot more than half of Bolden after leading man Anthony Mackie (The Hurt Locker) bowed out of the production and was replaced by Gary Carr, who played an American bandleader in the PBS drama Downton Abbey and a 42nd Street pimp in the HBO series The Deuce. (Mackie appears as Bolden, however, in the Louis short.)

Pritzker’s Bolden script did its best to present a historically accurate portrait of the turn-of-the-century Crescent City and Bolden’s biography. Yet Pritzker admits to engaging in flights of fancy which he calls “mythical wanderings from my imagination.”

Best known as founder of and guitarist for the offbeat soul-rock band Sonia Dada, Pritzker had never made a movie before Louis. Yet that novice status has not kept him from attracting an impressive cast of actors and behind-the-camera talent to tell the story of a man Pritzker compares to “a shaman who flipped on the lights.”

A dozen years before he began shooting this movie, Pritzker first learned about Bolden’s life and legend, and soon found that the myth overshadowed the man. The cornetist was born to a working-class family in 1877, but after that the facts become less clear. To fellow “musicianers” who played with or around him, Bolden was among the first to break through accepted musical forms, pushing his group into an often-raucous improvisational style that would become known as jazz.

In the first decade of the 20th century, Bolden ruled the musical roost in New Orleans, playing tunes with titles such as “Funky Butt” and “If You Don’t Shake It, You Get No Cake.” By 1907, however, dementia — likely induced by alcohol — left him unable to function. That year he suffered a nervous breakdown while performing in a parade, and he was committed to an insane asylum in Jackson, Louisiana, where he played his cornet only rarely. Buddy Bolden died there, penniless and forgotten, in 1931.

The music for both of Pritzker’s movies was composed, arranged and performed by New Orleans native Wynton Marsalis, artistic director of Jazz at Lincoln Center. Marsalis has defended Pritzker against pre-release complaints that he fails to adhere to the facts as known. Marsalis said the director’s fictionalized presentation of Bolden’s and Armstrong’s lives remains within the bounds of artistic license. “It’s not a documentary,” Marsalis explained.

The tracks on Marsalis’ CD soundtrack, released by Blue Engine Records, include “All the Whores Go Crazy (About the Way I Ride),” “Make Me a Pallet on the Floor” and “Funky Butt.” The disc showcases vocalists Catherine Russell and Brianna Thomas and instrumentalists such as Wycliffe Gordon, Victor Goines and Marcus Printup help Marsalis bring back to life turn-of-the-century New Orleans. The musicians take early jazz classics popularized by Bolden and Louis Armstrong and infuse them with a modern sound and energy.

The Bolden project, which the 60-year-old Pritzker is self-financing, has reportedly cost more than $30 million. But as a billionaire member of Forbes’ list of the 400 richest Americans, Pritzker’s got deep pockets: Forbes lists his net worth as $1.95 billion.

“Obviously, I’ve had a steep learning curve, and I just decided that I wanted to tell the story in a different way than I had captured it,” he told Deadline.com’s Mike Fleming Jr. in 2014. “The film starts out in this asylum where Bolden has been living for 24 years, and a radio is turned on and there’s a Louis Armstrong concert being broadcast. It is important that the audience understands this music is the trigger to taking this guy on this cinematic trip, and it opened the door to using some projection techniques and still photography I’ve been working on. They help tell the story quite effectively.”

A handful of recognizable actors round out the cast, including Deadwood’s Ian McShane as Judge Perry, The Walking Dead’s Michael Rooker as enforcer Pat McMurphy, Transformers’ Reno Wilson as Louis Armstrong and Chicago Med’s Yaya DaCosta as Buddy’s wife, Nora.