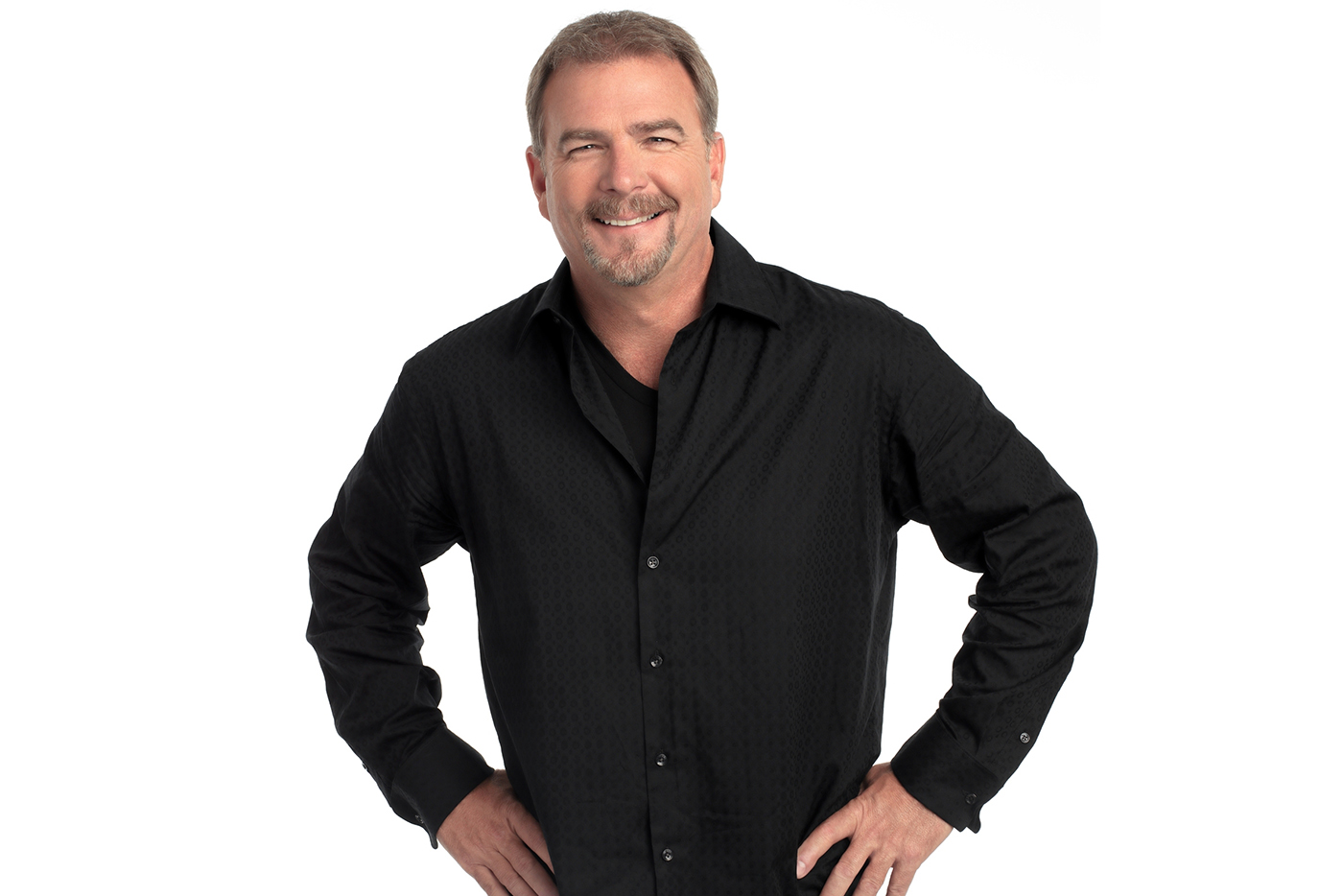 Engvall’s brand of down-home observational humor was always popular with comedy fans. Yet his career went to another level with the mega-success of the Blue Collar Comedy Tour, in which he joined forces with fellow jokesters Ron White, Jeff Foxworthy and Larry the Cable Guy to perform at sold-out arenas across the country. The tour, which ran from 2000 to 2006, led to the comic earning his own family-friendly sitcom, The Bill Engvall Show, which ran on TBS for 30 episodes over its three seasons, from 2007 to 2009.

Engvall knew even then that his teen co-star Jennifer Lawrence, in her first full-time job as an actress, was bound for bigger stardom. “Jenny was not what you think a Hollywood actress would be,” he recalled. “We would throw the football around in the studio parking lot; she was that kind of person. We shot a show one late Friday night and then I was in bed, and early the next morning I heard Jenny’s voice in the house. I went downstairs to see her borrowing my son’s surfboard! She was just very real.”

Aside from pleasant memories of Lawrence, Engvall also recalled his funny childhood, how he shaped his stage material and the achy season he spent as an unlikely hoofer on the 2013 run of ABC’s Dancing with the Stars.

Your Blue Collar Tour partner Larry the Cable Guy was the first national comedian to play at The Vine on Feb. 18.

For comedians, whenever you find new ground that you haven’t played before, it’s like a kid with a new toy. I’m really looking forward to getting up there, and the good thing about Larry being there first is that now they’ve got something to look forward to. (Laughs) No, you couldn’t have had a better guy to open it up, he’s a great guy.

The Vine, which opened Feb. 10, still has that new-car smell.

Isn’t that nice? I played Vegas a couple weeks ago and I walked in the casino and it just had that stale death smell. I’m not sure but I think Moses might have gambled there.

Where do find your comedy?

I don’t do political or religious stuff in my show. Buddy, I don’t care how good the joke is, 50 percent of the audience is gonna leave. Especially in this day and age, I don’t remember ever in my life that people are so violently opposed to each other. It used to be “I don’t agree with your guy,” now it’s “I don’t agree with your guy and I’m going to hit you in the head with a hammer.”

So I steer clear of that stuff. For awhile my opening line was, “I don’t really know how to start this show. The end of the world as we know it is here.” And everybody thinks I’m gonna do a Trump joke. And then I say, “My 81-year-old mother has learned how to text.”

When people come to my show, my job is to make them feel good and let them leave with a better feeling than when they got there. And I’ve discovered over the years that we all do the same stuff, it’s just with different accents.

The show I’m bringing there, we talk about everything, from my experience on Dancing with the Stars, to my knee replacement and kidney stones. This might sound weird but I don’t want people thinking that they’re going to be seeing a standup comedian. It’s more like a 75- to 90-minute conversation where we weave in and out of different subjects, and I’m just the funny guy doin’ the talkin’.

The late George Carlin said in a 2004 Syracuse New Times interview that he would shape his tours by rotating in new material and dropping older material over several weeks until he had a new show.

It’s a real weird thing. It’s like if you and I were gonna see Aerosmith together, on the way over we’re hoping they play “Dude Looks Like a Lady,” “Walk This Way,” “Toys in the Attic.” We don’t want to hear the new stuff, just play your hits for me.

But with comedy, the audience wants to hear the old stuff, but once they’ve heard it, and they’ll still laugh, you don’t get the same reaction. That’s why you have to gradually rotate in new stuff, so you have a nice combination of new and old together, so people will say, “Hey, he’s going to do the bit about Dancing with the Stars,” and then, “Hey, here’s something I haven’t heard before.”

Speaking of Dancing with the Stars, did you prepare yourself mentally and physically for that show?

No, and I wish I had. In hindsight I would have gotten into stretching classes and got on the cardio machine. It was one of the most brutal things, and you’re only dancing for a minute and 10 seconds each week. When I combined all the rehearsal time at the end of the run, it was six hours a day, seven days a week, for 13 weeks in a row. And I was 57. Buddy, we’re not designed to dance like that way; we’re designed to dance once a year drunk at a wedding. But I got through it, and I still hold the record for being the oldest guy and only comedian to ever get to the finals.

Were you funny as a kid?

You know, I was a funny kid, and I’ll tell you why. We moved a lot because my dad was in the public health service, so the government moved us every two years. And I wasn’t a jock, so the way you made friends really fast was you became the funny guy.

There has been news reports about people who have volunteered to transcribe Phyllis Diller’s joke files of index cards at the Smithsonian. Do comedians still have joke files?

Well, they would never find mine because there isn’t one. I never write anything down, and I’ve probably lost two or three comedy albums because of that (lack of) material. When I’ve tried writing it down, I look at it and I go, “Well, that sucks.” I’ve always felt that my style of humor is, well, it’s not improv, but if I see something on the way to the show on Saturday, I’ll try it out.

Are you constantly on tour?

Yeah, because comedians are not like a band that can take six months off to write new songs. Once you’re serious about doing comedy, you’re on the road until you decide to quit. Early on you took everything that came down the pike and the guys that continue to do that usually burn out.

Right now I’ve got it great. Most of my gigs are Friday and Saturday, and then I’m home Sunday through Thursday. I take off most of the summer because nobody wants to go inside to see a show because they’re out at the lakes, camping, fishing, playing golf.

Does it make a difference playing intimate rooms or larger venues like The Vine?

I find that any venue under 3,000 seats is probably where comedy should live. Jeff, Larry, Ron and I were doing the Blue Collar Tour in arenas, and it was really fun and the checks were big. But the (arena) audience was people watching it on a screen and that’s not the way comedy was meant to be seen. Generally, I find that places like The Vine, with 2,400 seats, are pretty good.

You’ve reached a point where your many fans come to see you. Earlier in your career, could you read an audience to know if your comedy was going over with them, or you would have to work that much harder to make them laugh?

Back when nobody knew who I was, it was always weird to me that you could get the mood of a whole audience who didn’t know each other, and sometimes they were into it, and sometimes they weren’t. They didn’t get together and say, “We’re going to be a quiet audience tonight.” But today, even though they’re coming to see me, I’ve had two shows in a night and both shows would be completely opposite.

Knock on wood, I don’t get the rowdy audience and I don’t want one, although Larry likes that. My job is to make you sit back, relax and laugh; it’s a conversation, not an interaction. I don’t ask the audience questions, because, buddy, that’s when you can get in trouble.

Were you a club deejay in an earlier life?

Well, I think I should qualify that. (Laughs) Let’s just say my deejaying involved the phrase, “Gentlemen, get out your wallets: Here comes Cheyenne!,” and I would play a lot of Van Halen and AC/DC.

What was your life like before and after the monster success of the Blue Collar Tour?

Because of the “Here’s Your Sign” bit, I had started to get a name and I was doing decent business. But Blue Collar put it over the top. That was something I don’t think will ever happen again: It was the right time, the right people and the right demographic. We hit an audience that television generally overlooks: the Midwest, the blue collar people. We were kinda what people stood for.

We all thought the tour would be successful, but my god, we had no idea. I mean, there were Blue Collar dolls at one point. I was telling Jeff the other day, “When we’re older and we have grandkids, we can tell them that we were part of a tour that had never hit this country before, and probably never will again. In this day and age, I just don’t see another tour like that happening.

Yes, that’s a great analogy! And we had a blast. There are arenas that we still hold the record for most tickets sold in a day. That’s insane! I’m not gonna lie to you: The Blue Collar Tour made me able to retire whenever I want.

I still do this because I love being on stage. And I love when people come to the show and then I’ll get an email or a Twitter account posting that says the person was having a bad day, but they came to the show and started laughing and they ended up having a great day. You can’t beat that.

Much of the Blue Collar Tour material that was done in the 2000s is still viable and timeless today.

Yeah, I did a Christmas “Here’s Your Sign” song and it’s played every Christmas like “Grandma Got Run Over By a Reindeer.” And my little “Here’s Your Sign” thing kind of became the “Where’s the Beef?” of the 1990s. It’s just weird that you have affected the English language. Somebody 20 years from now will ask, “Does anybody remember what Bill Engvall did?” and they’ll answer “Here’s Your Sign.”

I told my wife that I want her to put on my tombstone, “It’s not as humid as I thought it would be.” (Laughs)