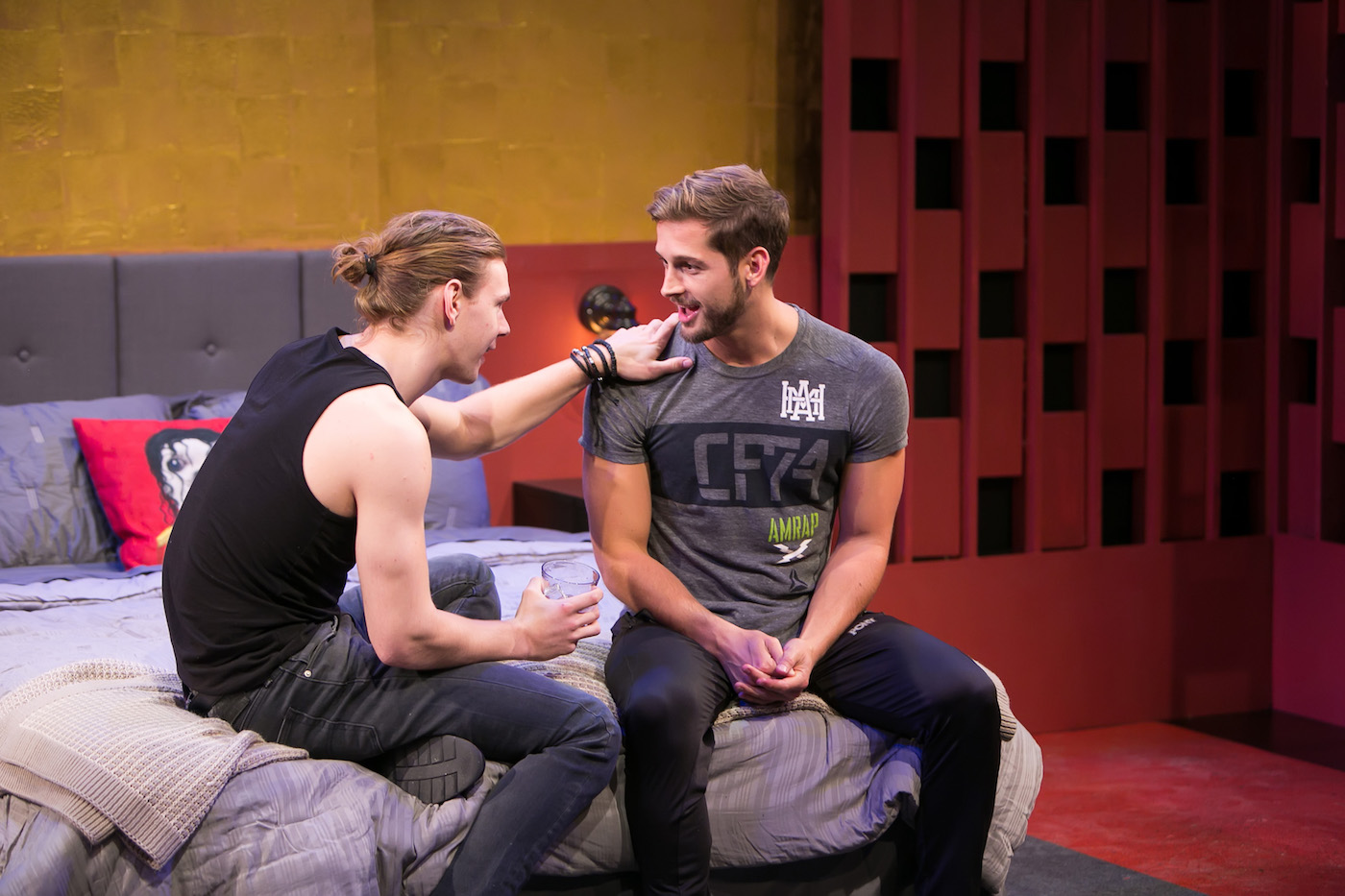 United only by their juxtaposition on the calendar, two shows running now are extraordinary celebrations of American wit. Once defined as “educated insolence,” wit implies brilliance of mind and quickness of insight, as opposed to mere humor, which can be flat-footed and obvious, like a Neil Simon gag.

What you get in Douglas Carter Beane’s The Little Dog Laughed (through Sept. 24 at the Redhouse Arts Center) and Stephen Sondheim’s A Little Night Music (through Sept. 23 at Central New York Playhouse) is a gossamer lightning flash that illuminates character and moves action.

Given its critical raves and the Tony Award for lead Julie White, it’s surprising that it has taken 11 years for Beane’s The Little Dog Laughed to come to town. Then again, only two other Beane shows have made it to Central New York: As Bees in Honey Drown and Music from a Sparkling Plane.

The subject matter is inviting. Although outwardly a comedy about a hot young Hollywood leading man wanting to come out of the closet, the always barbed dialogue reaches more widely. Like the disharmony of moving a property from stage to screen, the sacrifice of self in artistic collaboration, and the deep needs of mass audiences for popular culture. Producing The Little Dog Laughed at the Redhouse comes from a harmonic convergence of the stars. Founding artistic director Laura Austin surely knew that her piquant and trenchant stage persona would make a perfect fit as Diane, the agent who knows better than her pretty boy client Mitchell (Max Emerson). As life imitates art, Max Emerson wrote, directed and starred in the indie film Hooked, which opened in Toronto in May. Also in that film is hunky Conor Donnally, who appears here as Alex, the rent boy who challenges Mitchell and Diane’s arrangements. The film’s cast also includes, ahem, Laura Austin.

Little Dog begins with Diane, her raptor eyes gleaming, as she recounts the opening of the 1961 movie Breakfast at Tiffany’s with Audrey Hepburn, dismissing with contempt Truman Capote’s novella on which it is based, and damning casting decisions made by director Blake Edwards. Austin makes it a bravura run. Only gradually do we realize how deeply she is revealing herself and that the speech is key to what The Little Dog Laughed is all about.

Playwright Beane, wrongly linked to contemporaries like Christopher Durang, is more like long-gone comedy-of-manners playwrights like Phillip Barry, only with saltier language. All his conceptions are off-center. Movie star Mitchell is too modest to bother with being a diva. Possible boyfriend Alex is a thief. And Alex’s girlfriend Ellen (Grace Allyn) is not free of the self-deception of show folk.

Making a welcome return in this superlatively staged comedy is director Vincent J. Cardinal, who holds an endowed chair at the University of Michigan.

Except for A Funny Thing Happened on the Way to the Forum, community theater groups are wary of producing Stephen Sondheim musicals, and the last local appearance of A Little Night Music was from Syracuse Opera two years ago. This is one way of measuring the bravery — make that audacity — of the Central New York Playhouse for mounting this exquisite, bittersweet confection in the company’s intimate space at Shoppingtown Mall.

The moving force here is Abel Searor, one of the hardest-working performers around and certainly one of our most reliable aesthetes, who is music and stage director. His five-player orchestra, including Sarah Midgley’s plaintive clarinet, honors one of Sondheim’s best scores.

A Little Night Music was “suggested by” movie director Ingmar Bergman’s biting 1955 satire, Smiles of a Summer Night, but with a vastly different and gentler tone. Middle-aged lawyer Fredrik (a world-weary Rob Searle) has not yet consummated his marriage to naïve child bride Anne (Taylor Peck), when his old flame Desiree Armfeldt (Michaela Oney), an actress of a certain age, comes to town.

Alas, she already has a boyfriend, Count Carl-Magnus (Steve Gamba), a married blowhard in a ridiculous uniform. The count’s tart-tongued wife Charlotte (Erin Sills) sees through every subterfuge and knows everything.

In a parallel plot, depressive, suicidal seminarian Henrik (Nic MacLane) is guiltily in love with the still-virginal wife Anne, but is given lessons in carnality from the cheerfully earthy servant girl Petra (Ceara Windhausen). In a cast with a surplus of female talent, Windhausen delivers the show’s second greatest number, “The Miller’s Son.”

As charming as so much of the score is, such as the quintet’s “Remember?” or “Weekend in the Country,” the make-it-or-break-it number is “Send in the Clowns,” one of the greatest songs in the American musical theater. Michaela Oney, a reliable, often hilarious character performer (Mama Morton in Chicago) is not the Desiree from central casting. But Searor knows what he is doing. Oney’s “Clowns” is all the more affecting for being unanticipated. Oney will be cast in different roles now.