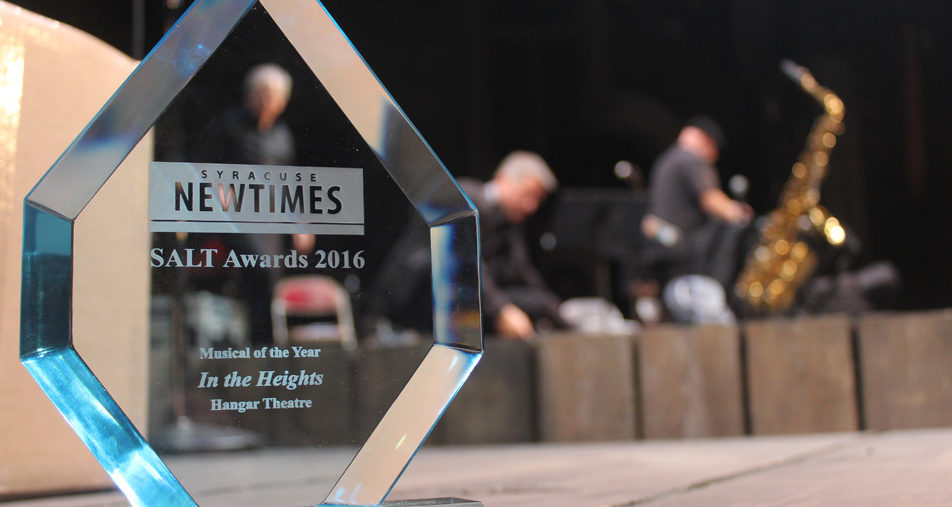 The CNY performing arts community once again had its day at the 2016 SALT Awards.

The Sunday, Oct. 30, ceremony’s precise two-and-a-half-hour showcase began with a running start, propelled by the dry wit of hosts Rita Worlock and Abel Searor. “I have a shelf filled with these at home. I mean, I swear I’ll get them to where they have to go,” he said. Although Syracuse Stage’s general manager Jon Wilson may have frequented the stage the most times to accept awards, the Baldwinsville Theatre Guild’s adaptation of Sweeney Todd swept the night.

The community theater may have not won the most awards, but their wins for the bloody barbershop musical were met with the most raucous applause. The boisterous support said more than enough. The production took home Best Community Musical to top off the evening as well as Best Director and Leading Actor (Ben Sills for Community Play), among others.

Director Korrie Taylor was greatly appreciative, calling the opportunity one of the most fulfilling things ever. “Mom! It’s for directing!” she announced. She also didn’t miss a beat to ask where Central New York Playhouse artistic director Dustin Czarny was sitting, before telling him to “suck it.” Taylor’s humbleness shined with her stories of talking about the musical being a labor of love and her adoration for the ensemble.

Garrett Heater and his Syracuse Summer Theatre and Covey Theatre Company chopped into the ceremony with wins for Cabaret and Lizzie Borden Took an Axe, which has become an annual staple at the historic Barnes Hiscock Mansion on James Street. However, the multi-roomed and in-your-face performance debuted on a stage.

The eerie and resonating portrayal of Lizzie helped Jodi Bova-Mele take home the Leading Actress in a Community Play award. While accepting the award for Best Supporting Actress, Carmen Viviano-Crafts clued in the audience of the six-year run of the Heater-written and directed production.

Heater also took home a costume design trophy for Lizzie Borden. “I have to speak to the costuming,” he said. “It really helps tell a story.” An outfit effectively adds to a character and the overall feel of a performance, he insinuated, and he thanked his mother for putting him in front of a sewing machine at an early age.

Where there weren’t wardrobe malfunctions noticeable to the patrons, the occasional slip-up, technology gaffe or change of award order didn’t derail the pace of the ceremony. The presenters and acceptance speeches were not longwinded, but the only salt in the wound was emphasized by the booing from the audience. A musical interruption provided by The Coachmen house band, which was instructed to begin playing after 45 seconds to prevent potential SALT stemwinders, cut off Stephanie Long and Heather Jensen’s speech for Costume Design of a Community Musical for Sweeney Todd.

Searor and Worlock aptly made pithy comments to redirect the attention, save the banter about pink overalls and glitter-covered cards bearing the names of the winners, which he blamed on SALT producer-director Liam Fitzpatrick.

The blazing red-suited Fitzpatrick offered remarks about Our Town, Central New York Playhouse mounting that he directed. (Fitzpatrick would go on to win Best Lighting Design of a Community Play.) “Our Town is a very special show, very special to me. It’s a show where you can change people’s lives.”

Fitzpatrick also reflected on his teenhood experiences. After seeing three New York City performances of Spring Awakening, the last waking moment of the play’s suicidal character, Moritz Stiefel, coaxed him. “I knew I had to wake up the next day.”

“We are not curing cancer,” Fitzpatrick affirmed. “We are performing musicals in church basements. This is what we are celebrating. I don’t care if you are nominated or not, you made magic this year.”

And that resonating inspiration can be found in the obvious places and within people. A mid-ceremony performance of Rodgers and Hammerstein’s “You’ll Never Walk Alone,” which was led by Kristina Marie Clark, saluted the theater and community members lost in the previous year.

Her impact, he said, was immense and that the younger people would not fully understand. However, these younger aspiring actors and actresses would have been mentored by someone who had direct contact with Lotito.

Patricia MacKillop, the late spouse of Syracuse New Times theater critic James MacKillop, was honored with the Lifetime Achievement Award. Her passion and love for the community was explained by Fitzpatrick and Searor, who said he had the honor to play at her funeral per her request.

The ceremony was indeed another tear-filled one, but the heartfelt remembrances were complimented with poignant presentations, including actress Tamar Smithers, who took home the award for Leading Actress in a Professional Musical for the Redhouse Arts Center’s Dreamgirls. She also talked about her ensemble work for Appleseed Productions’ Steel Magnolias: “It’s not easy: six women to make things happen. And that’s what we did.”

Sara Weiler of Syracuse Summer Theatre showed off her chops with a highlight from Cabaret, and Korrie Taylor broke out her inner Audrey with the Little Shop of Horrors tune “Somewhere That’s Green.” The ensemble performances of “A New Argentina” (from Central New York Playhouse’s Evita) and “The Ballad of Sweeney Todd” (Baldwinsville Theatre Guild) got people on their feet.

Other winners to round out the evening included the Redhouse’s Romeo and Juliet, which won for Ensemble of the Year in a Professional Play. Colin Wilson commented on the labor of the traveling show, complimenting how the amount of work does pay off.

Peter Amster picked up a SALT trophy for directing Ken Ludwig’s Baskerville: A Sherlock Holmes Story, which was featured at Syracuse Stage. Amster, who was already at the 820 E. Genesee St. complex to conduct rehearsals for the holiday production of Mary Poppins, said that he was shocked by the Sherlock victory because comedies normally don’t win the particular professional play category.

For playing multiple personalities in Rarely Done’s Bill W and Doctor Bob, the continually entertaining Josh Taylor took home Supporting Actor in a Community Play. “Last year I had to sing and dance (for the musical Young Frankenstein),” he said. “This year I had to play 15 characters in a play that wasn’t really funny.”

View photos of the event by Bill DeLapp below: