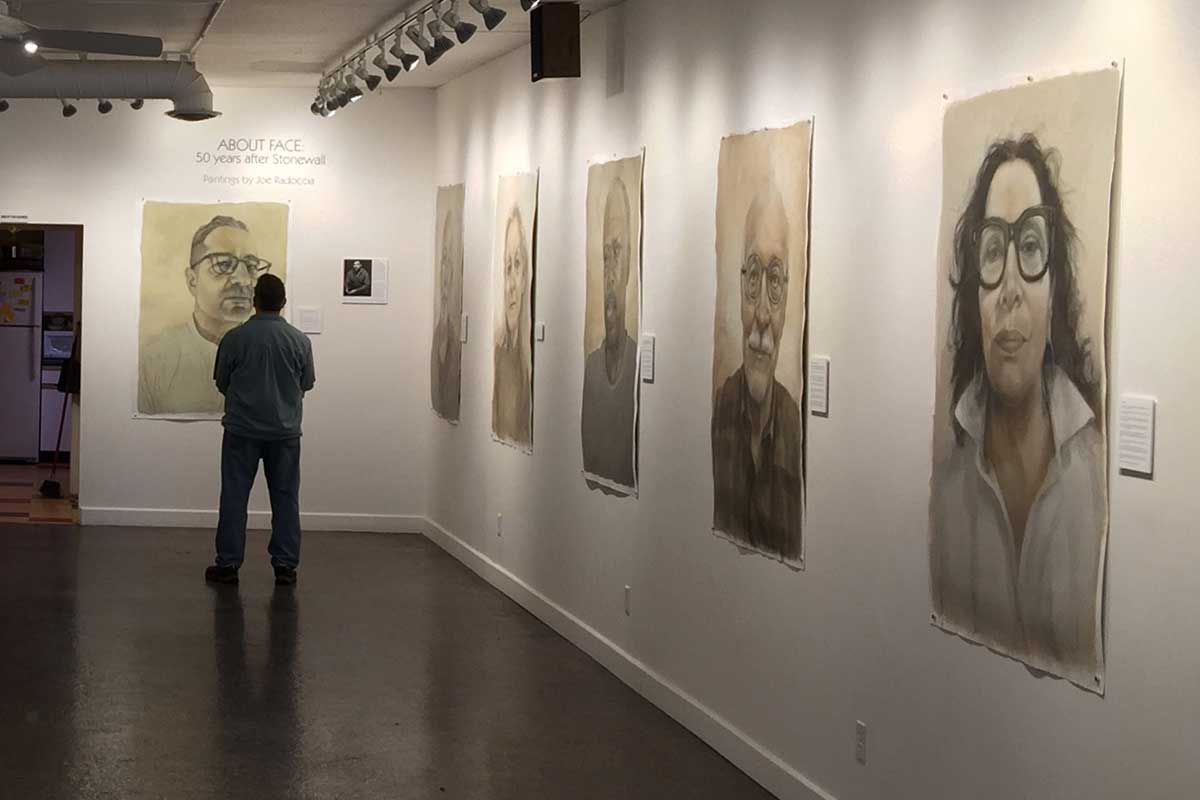 Large-scale portraits more than 5 feet tall currently fill the walls of the ArtRage Gallery. Most of them depict people over age 60: writers and artists, the owner of a barbershop, a musician, and a psychoanalyst. These elders grew up at a time when they and their LGBTQ peers were regarded as deviants, criminals, undesirables. The portraits, and brief comments by those pictured in the paintings, reference both personal journeys and societal trends.

Indeed, the exhibition About-Face: 50 Years After Stonewall intersects individual lives and larger changes, reflecting on the subjects of Joe Radoccia’s portraits and events of the last five decades. The show blends artworks with a mass of archival material regarding struggles for LGBTQ people in Central New York and around the country.

At the same time, the exhibit’s visual energy largely springs from the portraits. Radoccia does them with a brush and ebony pencil on paper, beginning the creative process by talking to a subject and photographing him or her. For the portrait of Joe McPhee, a trumpeter and composer, there were two two-hour sessions. Racoccia says he chips away during those encounters, getting closer and closer to a point where the subject is barely aware that photos are being taken.

The best portraits, like those of Richard Taddei, Lenwood Sloan and Lois Horwitz, are accessible, rendered in soft colors, intimate. That Radoccia chooses to work large in no way dilutes that intimacy. The portraits clearly have a spark, a sense of the subject that’s difficult to describe or define.

It should be noted that this isn’t a new project for the artist. He’s been working on the series for roughly five years and has shown his portraits at the LGBTQ Community Center in Kingston, New York; the Burchfield Art Center at SUNY Buffalo; and the Coburn Gallery at Ashland University, among other venues.

The paintings don’t appear in the same format each time. In other shows, portraits have been hung without text or even a mention of the subjects’ names.

The inclusion of text works because it’s brief and typically incisive. Bob Pesce, for example, says, “I’m a man happily married to another man. Who would have thought 50 years ago, 10 years ago, that it was remotely possible?”

Other comments speak of harsh times. Lucky, the barbershop owner, talks of an incident in which she and a friend were threatened at knifepoint. And Charles Leslie says, “Especially during the Eisenhower years, the police would arrest men and put their names in the newspapers, for everyone to see and point fingers. The situation was revolting.”

Radoccia plans to keep working on the series but definitely doesn’t see it frozen in place. At ArtRage, 13 portraits of elders are combined with three portraits of people in their late 20s or early 30s, thus providing a sense of contrast. He plans to do more portraits of younger subjects.

Beyond the portraits, the ArtRage staff, collaborating with local activists, initiated a larger conversation by covering a wall with publications, news clippings from The Post-Standard and The Herald Journal, and much more. The items range from a national publication, The Ladder: A Lesbian Review, to an article dealing with a Common Council debate about a gay-pride day, from a letter whose signatories supported a local fair practices ordinance to a brochure describing an exhibit connected to the CNY Family Pride Project. Syracuse artist Ellen Blalock put together that show.

And there are images and articles packing a wallop even today. In a 1985 photograph of a march, several people wore paper bags over their heads; they feared being fired from their jobs. An obituary for Johnnie Nottelman, 31 years old, noted that he worked on the AIDS Quilt and his death was AIDS-related.

Finally, a series of well-designed posters hung on the gallery’s front wall provides timelines for the past 50 years. The posters refer to the founding of local organizations such as CNY Pride, Friends of Dorothy House, and SAGE Upstate, to court cases, and to the advent of a Pride Day at the New York State Fair in 2015. That was the first time a state fair anywhere in the United States scheduled such an event.

In conjunction with the exhibit, ArtRage has scheduled a Wednesday, June 19, film program starting at 7 p.m., featuring Happy Birthday, Marsha and The Death and Life of Marsha P. Johnson. She was an activist advocating for LGBTQ rights and a principal organizer of the Stonewall uprising that took place on June 28, 1969.