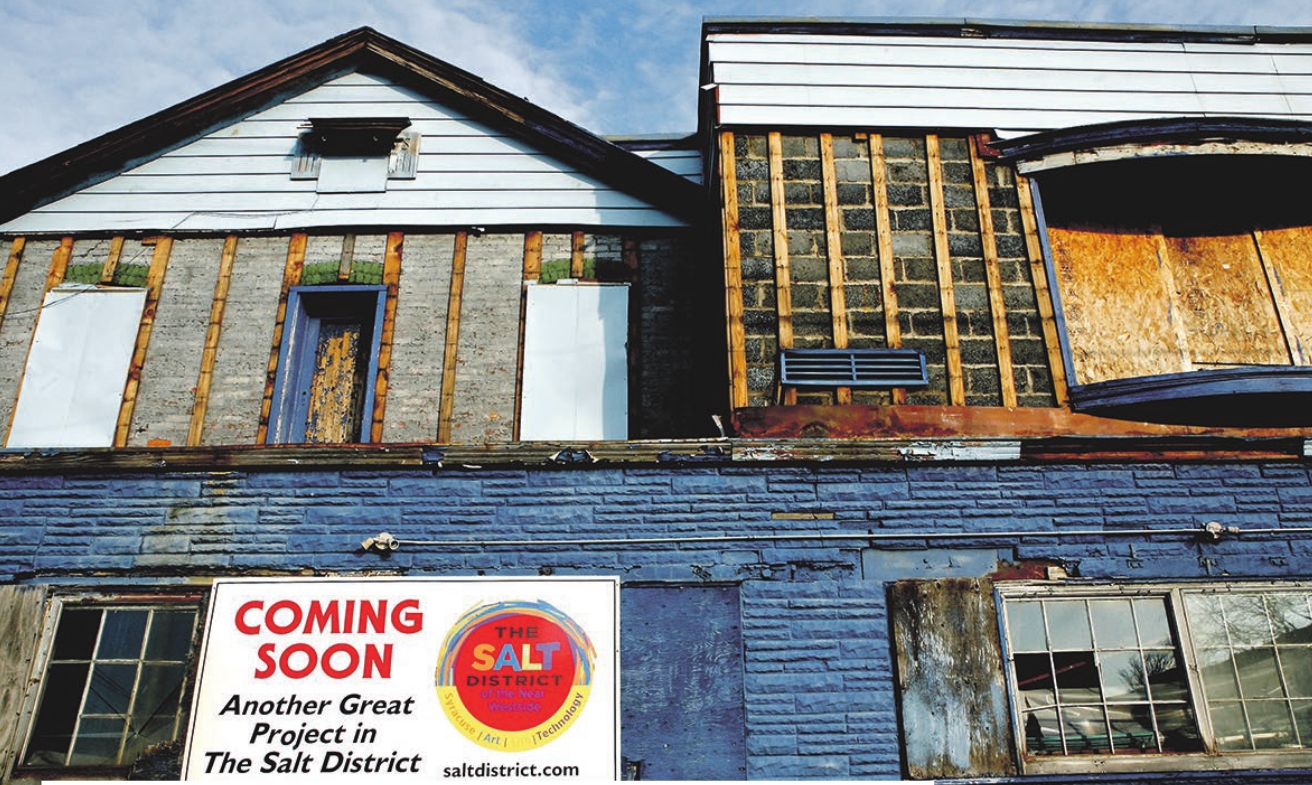 This summer, two artists are starting a residency program that will brighten the neighborhood.

It’s no secret that Syracuse’s Near West Side has its desolate side, isolated as it is from Armory Square by West Street. This summer, however, two artists are starting a residency program that will brighten the neighborhood. Supported by the Near West Side Initiative, the artists will spend several months working on creative projects to engage community members.

With a grant of $560,000 from ArtPlace and other sources, the program is meant to improve the quality of life for Near West Side residents and to attract people from other communities to visit the neighborhood, according to Maarten Jacobs, director of the initiative.

Edlund and Cardone are both living and working at SALTQuarters, headquarters of the program, at Otisco and Wyoming streets. SALTQuarters was transformed from a vacant restaurant into a 4,000-square-foot space housing two apartments, three art studios and a gallery.

Edlund’s residency project is in two parts. One is a straightforward exhibition titled Forgotten New York of his paintings and of paintings he is working on.

The other is an unusual public art project. Edlund will take a street name such as Otisco, which is Native American, and translate it into English. He will then spray paint on Otisco Street both names and an image illustrating the English meaning. For Otisco, that will be an image of a lake with a low water level; Otisco means “water almost dried away.”

This project, Edlund says, is not about “bad things happening to the poor in difficult times.” Rather, Edlund wants residents and visitors to notice aspects of the neighborhood that they have never noticed before. In this case, it’s the fact that Native Americans used to populate the area.

Edlund also intends to spray paint some streets linking the Near West Side to the rest of the city. He said some of this should be completed by the end of September.

Cardone will be tracking the walking routes of 12 ordinary people who either live or work in the Near West Side. With permission from the city, he will use 12 colors to paint the routes these people take in and out of the neighborhood. These routes will start from points in the Near West Side and extend two or three miles.

“Many people are unaware of this neighborhood, or they just ignore it,” says Cardone. “Through these painted routes, anyone can follow them back to the neighborhood.”

“Everyone in this neighborhood will either be directly or indirectly involved in these two projects,” says Jacobs. With these two artistic projects, he says, “We’re hoping to see more interaction between the Near West Side and other neighborhoods.”