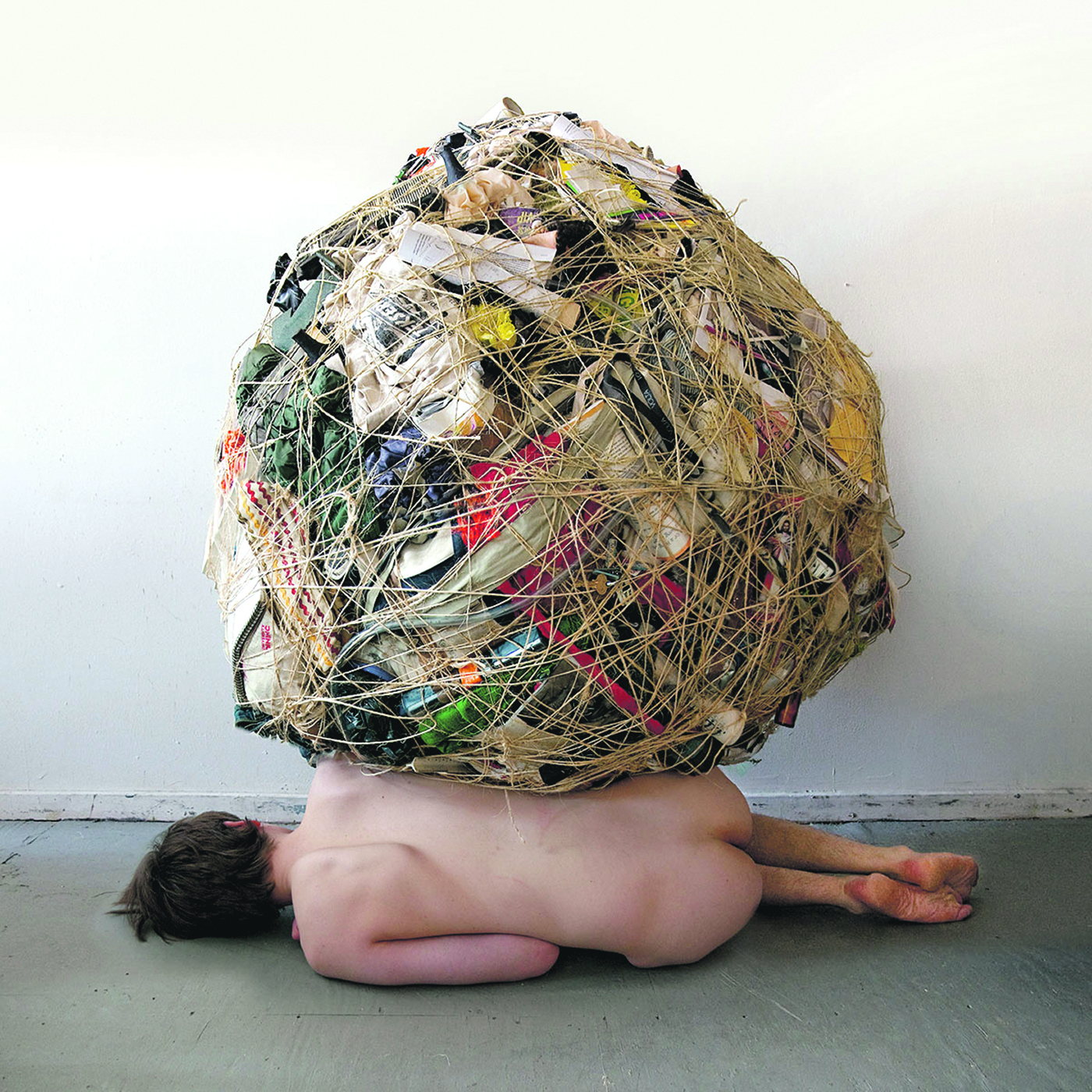 Mary Mattingly has global concerns in a new exhibit.

Mary Mattingly’s exhibit Mass and Obstruction at Light Work Gallery features work by an artist with one foot in the present and another in the future. Over the past 13 years, Mattingly’s projects have discussed both global warming and rampant consumption in the current day and the possibility of a dismal future in which most people on earth will struggle to feed themselves.

That’s a complex conversation, and the artist has utilized various media, including photos, sculptural forms, performance pieces and a film titled Mary Mattingly Owns Up. For her Waterpod Project, she utilized a transportable geodesic dome, with living quarters for five people and a capacity for collecting water. Mattingly has speculated about a time when small-scale communities will meet basic needs outside of a mass-production economy.

Mass and Obstruction displays both “Globe,” a twine-wrapped bundle of the artist’s possessions including small bottles and a cell phone, and “Boulder,” a much larger bundle holding photos, a marker, a copy of The Economist magazine, and other items. They weren’t created just to detail one person’s patterns of consumption. Instead, they influence viewers to think about what they own, what they need, and ultimately, the consequences of disposing of the discarded items.

The works have appeared in gallery spaces and public places; Mattingly once dragged one of them across the Bayonne Bridge. She’s spoken of the energy needed to manufacture and transport consumer goods as well as the cost of dealing with their disposal.

The exhibit has other pieces exploring that theme. There’s a large map identifying places around the world where chemicals used in photo paper are made and processed. A separate graphic discusses monazite and other rare-earth elements needed for photography. This ties into the notion of the world as an ecosystem.

Mass and Obstruction also displays 10 photos. “The Furies” depicts a large pile of garbage bags and a person straining to move it, while “House and Universe“ portrays one of the bundles on a naked woman’s back, in a scene reminiscent of Greek mythology. These two photos seem to allude to mass consumption taking its toll.

Mattingly used digital manipulation to create the 2012 piece “Microsphere,” depicting a scene on water joined by two signs — one referring to Honda, the other with the words “New Unlimited Wireless.” They don’t appear as product placement but as sardonic references.

Another image conveys a desert scene, a grave site with various items partially covered with dirt. The work is subject to a viewer’s interpretation. It may suggest that humans are digging their own graves.

Mass and Obstruction highlights work by an artist who has global concerns and the ability to address them in various media. Mary Mattingly’s work is imaginative and engaging, wrapped around pressing problems and possible solutions.

Love Songs For A Good Cause
Sammys Nominations
To Top