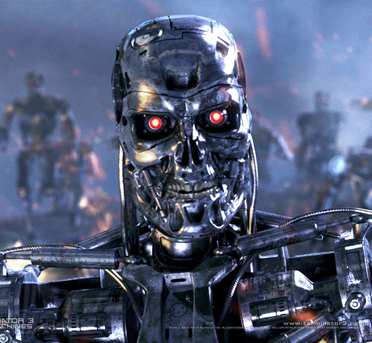 Terminator Genisys hits the road in 2015

Isn’t it enough that every other car model on the road has a name that, well, isn’t reeeeally a word at all.

Guilty. I drive a Chevy Cruze. My two cars before this one? Both Hyundai Elantras.

I do not cruze on down the road, but at least it’s close. Do not even ask what an elantra might be. The model namers hope it makes you think something like: My mom had all kinds of jewelry when I was growing up. She had rings with stones of ruby, diamond, and, what was that other one, elantra? More likely: Remember the school lunches they used to serve us? We really really used to hate the rubbery hot dogs that came with ketchup and beans and that other vegetable that nobody would eat, what was it, elantra?

ABC news reported Wednesday that Arnold Schwarzenegger fired off on his Instagram account the name of his next “I’ll be back” chapter, scheduled for release next summer.

OK, so the genesis is the beginning of something, and this sure isn’t the first movie of this franchise. It’s the fifth. The movie title plural of Genesis would be Geneses, thanks to Merriam Webster.

If I was going to spell it wrong to make the movie sound cool, I’d go with Terminator Genesi. But Arnold can do what Arnold wants to do. Wonder what he drives …

Oh, yeah, the ABC News story says the movie will come out on July 1, 2015, and it will also star Emilia Clarke — as Sarah Connor — and Jai Courtney.

And now for some insider stuff about an indie film

When The One I Love was shown at Sundance in January, Variety wrote that “it reinvigorates the romantic-comedy genre with an infusion of sci-fi fantasy elements and sharp-script writing.”

It goes national on Aug. 22, and Kristy Puchko of Cinema Blend sat down with director Charlie McDowell for her Wednesday story, and he spilled a secret about the movie. She didn’t want to reveal anything that would go down as a true spoiler, what with so many people really wanting to go see the three-person film, but she did want to spill his big one.

OK, so: It stars Mark Duplass and Elisabeth Moss as a married couple visiting a counselor played by Ted Danson. Puchko writes that she felt like the costumes felt like the additional characters in the film. And to that, McDowell answered that the costume director was his girlfriend, who was credited under the alias of Bree Daniel.

Puchko goes on to write: “Right. He’s dating Rooney Mara. Some part of my brain knew that at some point. … Celebrity can be complicated.”