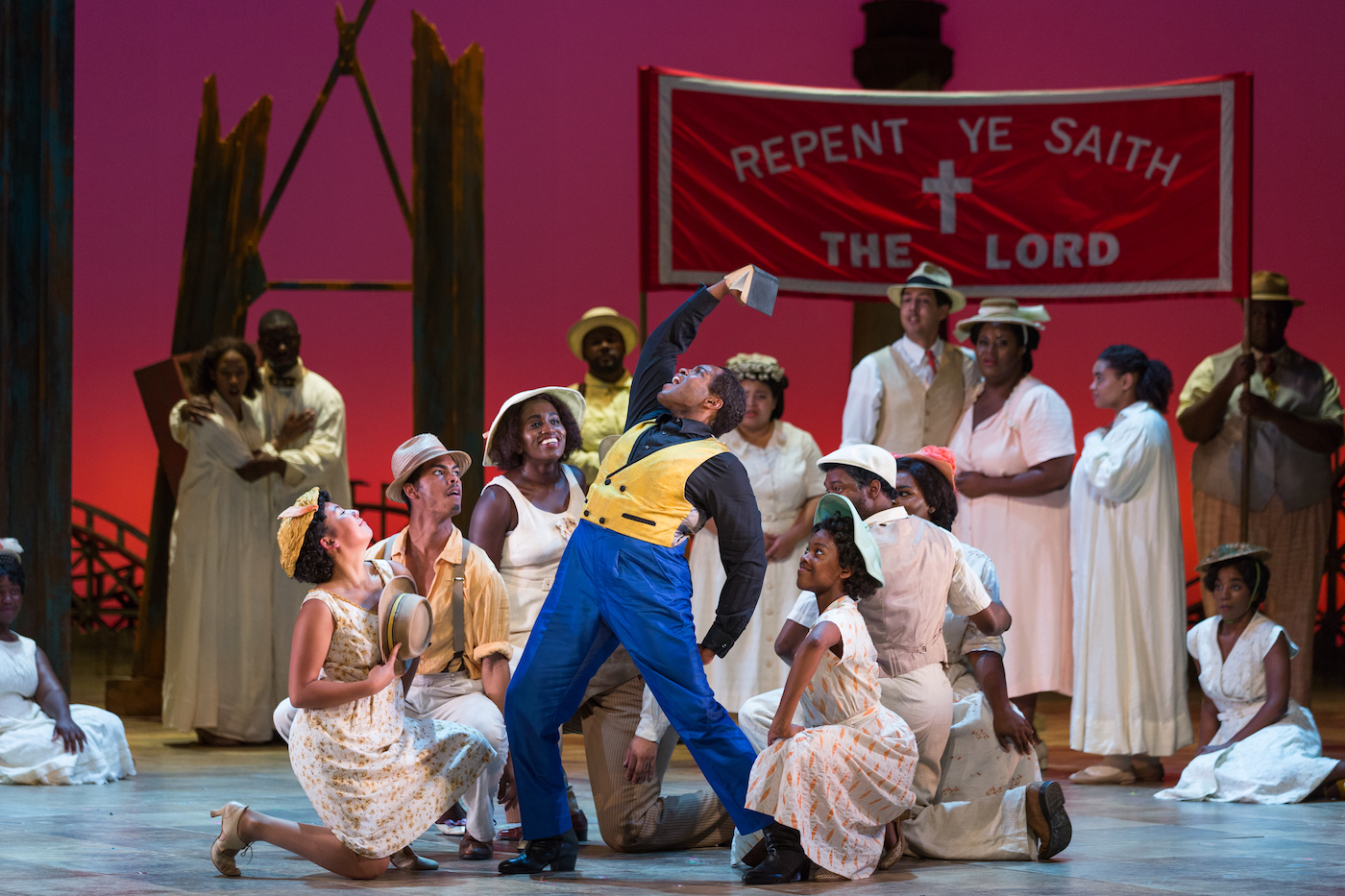 When the artistic mecca in verdant Cooperstown changed its name from Glimmerglass Opera to Glimmerglass Festival a few years ago, it signaled that new audiences were welcome. Notoriously demanding opera audiences would still travel extravagant distances to see top productions of rarities.

These would include the American premiere of Gaetano Donizetti’s Siege of Calais, new works like Paige Hernandez and Victor Simonson’s Stomping Grounds about contemporary refugees or Derrick Wang’s Scalia/Ginsburg, about the unlikely friendship between two justices who disagreed about almost everything. On the other hand, the audience-friendly Oklahoma! renews its vigor when golden voices are proclaiming “Oh, What a Beautiful Mornin’.”

Also at Glimmerglass are productions of George Frideric Handel’s Xerxes (Aug. 12, 18), in which the lead is sung by a countertenor, and George Gershwin’s Porgy and Bess (Aug. 13, 17, 19, 21), now established as America’s greatest opera. Rarely juxtaposed, they both present their most memorable vocal expressions in the first arias.

Although several selections from Porgy, like “It Ain’t Necessarily So” and “I Got Plenty of Nothin’,” are among the best-known from the Gershwin corpus, many audiences have had a difficult time seeing the whole work for two reasons. Some black artists were unwilling to appear in roles portraying prostitution and drug dealing, and eminences such as Desmond Tutu have disdained Porgy. It’s also huge, with more than 22 singing roles sometimes running three-plus hours. Black playwright Suzan Lori Parks wrote a truncated version titled The Gershwins’ Porgy and Bess in 2011 for Broadway, ostensibly to make it more appealing to contemporary audiences.

The Glimmerglass production can boast of authenticity. Artistic director Francesca Zambello mounted her Porgy for the Washington National Opera in 2005, employing the 180-minute 1935 book that retains charming non-plot items, like the Vendor’s trio, songs for the Honey Man, Strawberry Woman and the Crab Man. Conducting the pit orchestra is Gershwin specialist John DeMain, who has been in charge more than 300 times, going back 40 years before the opera’s status was so secure.

Glimmerglass has scoured the earth for the right voices with the right look. Silver-voiced soprano Meroe Khalia Adeeb as Clara has come from Torrance, Calif., to begin the action with a goosebump-inducing “Summertime.” From the beginning, we know that director Zambello is following Gershwin’s wishes that his masterpiece be sung by trained voices in operatic mode and not merely be a Broadway show with ambitions. Even when the action turns to Catfish Row street life, we hear the same precision in “Roll Them Bones.” Clara’s husband Jake (Justin Austin) responds with the cynical “A Woman is a Sometime Thing,” paradoxically as a lullaby.

Stocky South African baritone Musa Ngqungwana sings the role of Porgy, limping with a crutch rather than on an encumbering wagon. Seen last year in Rossini’s Thieving Magpie, he is initially unrecognizable despite a distinctive body set. As an actor he resolves the contradictions of Porgy’s character, a needy, crippled beggar who nonetheless projects enormous reserves of strength. Ngqungwana’s heart-swelling “I Got Plenty of Nothin’” might have been aimed at audiences in the depths of the Depression but here is a coruscating declaration of resolve. The title of the DuBose Heyward novel that inspired Gershwin was indeed Porgy.

The emergence of the flawed Bess as a counterweight is what makes the opera a drama. Talise Trevigne has an established reputation as an interpreter of Richard Strauss and Giacomo Puccini, but as an actress she’s extraordinary in conveying all the contradictions: Bess’ street flash, her fatal need-driven weakness as well as her sweetness and beauty. Her major solo, “I Loves You, Porgy,” throbs with deep-felt sincerity.

The love duet “Bess, You Is My Woman Now” toward the beginning of the first act in this configuration caps all musical expression. Gershwin is at the peak of his genius, and Ngqungwana and Trevigne soar with lyrical passion. This is the most ecstatic moment on upstate stages this summer.

Porgy and Bess’ musical abundance includes at least two other showstoppers, which require some plotting to explain. Bess’ previous boyfriend, the villainous stevedore Crown (Norman Garrett), in a drunken rage, murders the innocent bystander Robbins (Chaz’men Williams-Ali) with the hook from a cotton bale. The disposal of the body and the law’s processing of the murder consume much action, but it also leads to the blockbuster lament, “My Man’s Gone Now” by Robbins’ widow Serena (Simone Z. Paulwell).

Enticing villainy is the Mephistophelean Sportin’ Life (Frederick Ballentine), the neighborhood “happy dust” dealer who aspires to become a procurer with the right lady to sell. His “It Ain’t Necessarily So” delivers blasphemy at its most winsome.

Glimmerglass has spared no expense in production value, with Peter J. Davison’s scenery filled with grubby, rusting metal, convincing poverty. And the second act’s hurricane is enough to rattle bones.

Handel’s Xerxes also begins with one of the composer’s best-known melodies, usually called the “Largo,” although marked larghetto in the score. Its Italian lyrics are “Ombre mai fu,” or “Never was a shade,” in praise of the plane tree. The title character is taking his rest from world-conquering before contemplating his love life. A useful program note by classicist Olga M. Davidson explains that although most of the plot is fanciful contemporary invention, the episode of the plane tree derives from reliable ancient documents. The opera is often known by its Italian title Serse, as his name is pronounced in the lyrics.

A notorious flop at its 1738 opening, Xerxes is supposed to be an opera seria, meaning it would emphasize the august expression of deeply felt emotion, with most voices in the upper ranges. The title role was written for a soprano castrato and is taken here by countertenor John Holiday Jr., who brings the physique of a professional athlete. Nearly all the other singers are at home in the upper ranges, except for basso Calvin Griffin as the comic servant Elviro.

Low jinx buffo in the midst of all the seria is what led to Xerxes’ failure at its opening but now appears to be a welcome asset. Director Tazewell Thompson, former honcho at Syracuse Stage, enhances the comic interludes while never betraying the seria. His production team of star set designer John Conklin, costumer Sara Jean Tosetti and lighting master Robert Wierzel ensure that the ever-changing surreal set seduces the eye, beginning with that alluring plane tree.

The libretto by Nicolo Minato and Silvia Stampiglia exists to position singers to sing about different aspects of love, mostly unrequited. Contrived though situations may be, the music is exalted and its expression often moving. Still, the path is so convoluted that the program prudently includes a cartoon page with lines drawn between characters to help you remember who loves whom and who is being squeezed out.

When Xerxes turns from the plane tree he espies soprano Romilda (Emily Pogorelc) in red, the daughter of a second basso, his vassal Ariodates (Brent Michael Smith) in blue and gray, and immediately intends to marry her. Alas, Romilda has set her eyes and heat on Xerxes’s brother Arsamenes (soprano Allegra De Vita in a trousers role). The comic Elviro is his servant. Simultaneously, Romilda’s sister Atalanta (soprano Katrina Galka) in green also yearns for Arsamenes. And Xerxes’ original fiancée, Amastris (contralto Abigail Dock) finds herself passed over and disguises herself as a man to observe how things will play out. We are always sure who she is, but the characters in the cast are willingly gulled.

Baroque opera in general and countertenors in particular are thought to be acquired tastes. The excellence of this production, as well as John Holiday Jr.’s musicianship, can lead many to those acquisitions.