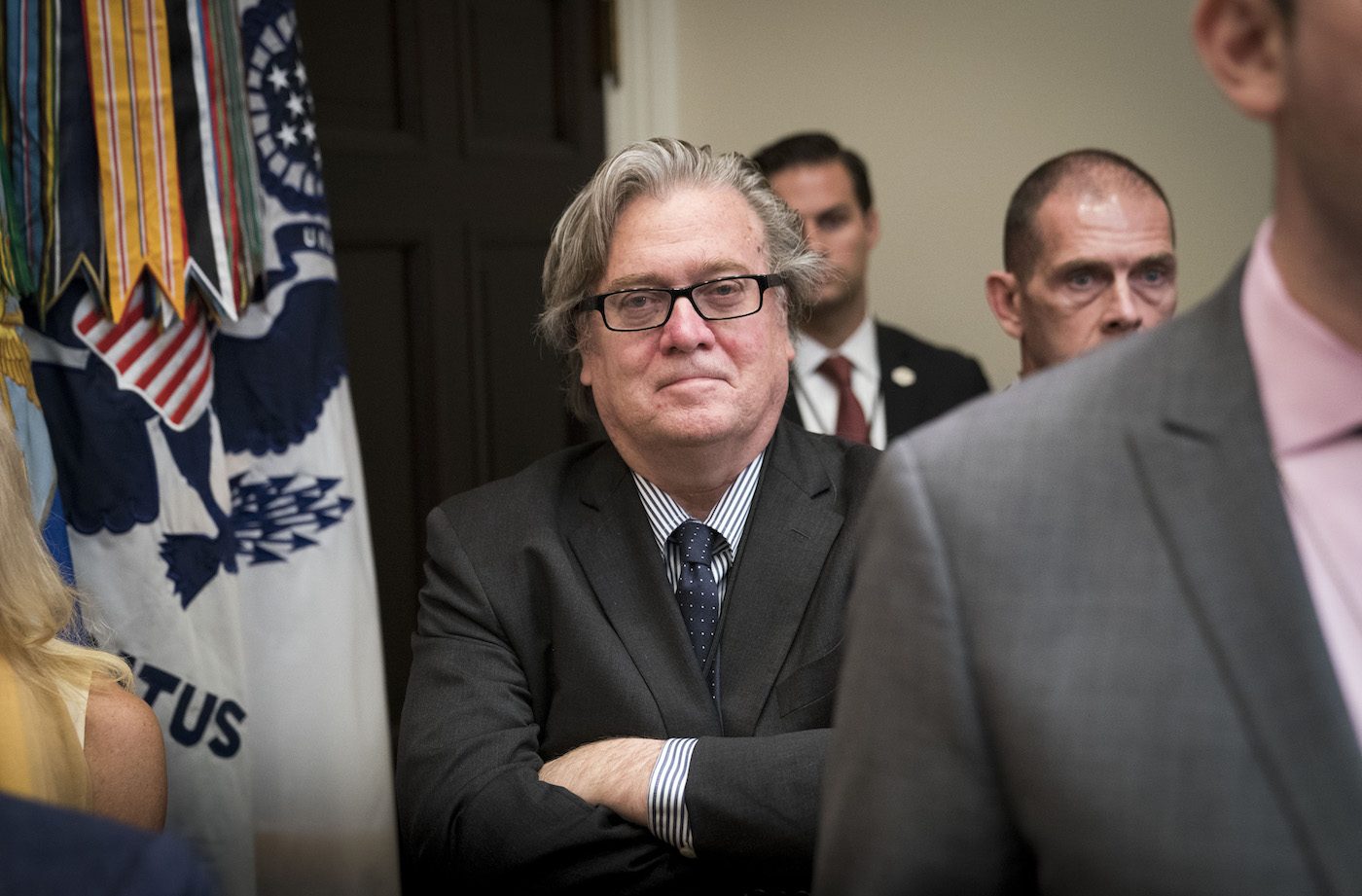 Donald Trump didn’t start a revolution. His election was merely the result of one. And now, the revolution that helped Trump gain the nation’s highest office is the same one he can’t stop.

We got our first proof of that on Sept. 27. That day was the first political contest since the Wisconsin Republican presidential primary in April 2016 in which Trump lost. He wasn’t on the ballot, but his dignity was. That was the day that Roy Moore, a conservative firebrand, defeated incumbent Luther Strange in the Alabama Senate Republican primary, part of a special election to fill the Senate seat vacated by Jeff Sessions when he left to become attorney general.

Trump and the GOP establishment in Washington had endorsed and vigorously campaigned for Sen. Strange. But as it turns out, the candidate who benefited from millions of dollars from an establishment super PAC came up short. And voters rejected the candidate supported by Trump, a president who won the state in 2016 by the largest margin since 1972.

There was a reason the establishment didn’t get behind Moore’s candidacy: He’s an extremely controversial figure. In 2003, Moore was removed from his position as chief justice of the Alabama Supreme Court for refusing to remove a monument of the Ten Commandments from the Alabama Judicial Building, despite orders to do so by a federal court. In 2016, he was removed from the same position again because he told Alabama judges to ignore the U.S. Supreme Court’s decision to legalize same-sex marriage. His foundation has accepted money from neo-Nazis. He has referenced “reds” and “yellows” in remarks about race. He has called Islam “a false religion” and proposed banning Muslims from holding political office. And he once suggested that the Sept. 11 attacks may have been a punishment from God.

Despite all of that, Moore was able to label himself as the political outsider — the anti-establishment, anti-elite crusader who would go to the Senate to blow up Washington. And just like Trump, that message worked. Moore defeated Strange by 10 points, winning all but four of Alabama’s 67 counties. It was the first time in five years that a sitting U.S. senator had lost to a primary challenger.

And now, the GOP leadership in Washington fears that it might not be the last — that Moore’s success in Alabama could incite conservatives in other states to try unseating seasoned establishment lawmakers — meaning we may very well be on the brink of a second Tea Party wave.

But unlike the Tea Party insurgents of 2010, with their burn-the-house-down motives, a new such wave could come to burn the whole town down. Frustrated and angry voters sent Trump to the White House as a way to create radical change at the top tier of government. Now, after failing to enact the president’s agenda on health care and taxes, along with regularly thwarting his daily actions and decisions, those same voters may set out to radically change the Congress that Trump presides over. If that means going against the president’s wishes and electing right-wing nut jobs like Roy Moore, then so be it.

It’s a wave that uses the same populist ingredients that created Trump. But as we found out in Alabama, it’s a wave even Trump can no longer control.

I call it “runaway Trumpism.”

Orchestrating this possible new Tea Party wave is Steve Bannon, Trump’s former chief strategist, who has made no secret his intention to wage war on the Republican establishment in hopes of reforming the party. Sen. Strange was the first casualty in that war.

And Bannon’s just getting started. After getting Moore across the finish line, Bannon has started to dip his fingers further into 2018 primary challenges, particularly Senate races in Mississippi, Nevada, Arizona and Wyoming.

Chris McDaniel, who is weighing a challenge to Sen. Roger Wicker in Mississippi, called Moore’s victory in Alabama “a huge win for the conservative movement, a great awakening,” adding that Moore’s success is a sign that “the GOP establishment’s stranglehold on American politics is finally coming to an end. It should encourage conservative challengers all across the republic.”

Whether or not Moore’s success can be repeated in other states is uncertain right now. Two polls showed Wicker leading in a hypothetical matchup against McDaniel in Mississippi, but they were released back in May, long before Bannon’s influence entered the contest.

But where the incumbent is not leading is Arizona. Polls show Sen. Jeff Flake, a fierce outspoken critic of the Trump administration, is already trailing challenger Kelli Ward by double digits in a GOP primary that won’t even take place until next August. Ward, who arranged a town hall about chemtrail conspiracy theories and told John McCain to give her his job when he was diagnosed with brain cancer, was formerly endorsed by Bannon on Oct. 18.

It would also seem that Bannon’s 2018 battlefield has expanded significantly. The Republican leadership was warned that a Moore victory in Alabama, followed by Tea Party-like insurgents gaining momentum, would result in a rash of retirements or resignations from incumbents, choosing to walk away quietly rather than face both anti-Trump leftists and pro-Trump populists in 2018.

On the same day Moore was victorious in the polls, Sen. Bob Corker, of Tennessee, announced he wouldn’t seek re-election next year. Corker, who was initially considered relatively safe from a primary challenge, has had feuds with Trump that have received national attention, the most recent being an interview with The New York Times in which he said the president was setting the U.S. “on a path to World War III.”

Corker, along with numerous resignations by senior Republicans in the House of Representatives, will leave a good number of empty voids that Bannon could be able to fill with his hand-picked anti-establishment candidates, a nightmare scenario for Senate Majority Leader Mitch McConnell and House Speaker Paul Ryan.

For them, and the rest of the GOP establishment, it’s how they handle potential candidates like Moore in the future that will be the daunting task. A slew of successful primary challenges against incumbents could make maintaining their respective congressional majorities in 2018 a tougher job in a year where the map was supposed to be in their favor, particularly in the Senate. Democrats will be forced to defend 23 Senate seats, many of which lie in states Trump won last fall. Republicans will only have to defend nine seats.

Unfortunately, they must first defend the Alabama seat in December’s special election for Roy Moore. It’s not the best optics, to say the least, nor in the best interest for the Republican Party, to back an intolerant religious zealot like Moore, who once elected, will do his best to defy the Republican Party.

But what’s the alternative? Abandon Moore and only further agitate the conservative base, while giving Democrats a sporting chance of capturing a seat in ruby red Alabama? A state that hasn’t sent a Democrat to the Senate in more than 25 years?

No, the GOP will get behind Moore and any other candidate Steve Bannon produces. Just like they did with the Tea Party in 2010, the Republican establishment will use runaway Trumpism to their political advantage, banking on the belief that these insurgents can be tamed once they get to Washington. And just like former House Speaker John Boehner and former House Majority Leader Eric Cantor discovered with the Tea Party, the establishment will find that using runaway Trumpism to their advantage will instead eventually lead to their undoing.

Top 25 Cities For UFO Sightings In The US
Central New York Heartbeat Poll: The Great Wall Of Trump
To Top