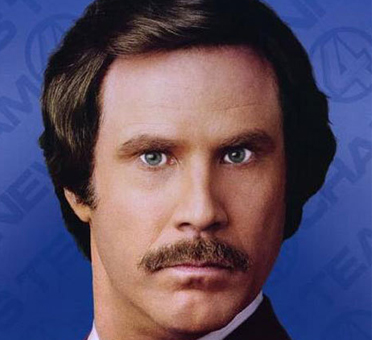 Five films opening in Syracuse this weekend – watch the trailers!

If you’ve got all your holiday shopping done, presents wrapped, decorations just perfect, ham in the freezer … you can go see five opening movies this weekend, guilt-free. Big ones, too, films that you’ve been just itching to see since the trailers came out months ago.

“Anchorman 2: The Legend Continues” is the sequel to the Will Ferrell-Paul Rudd-Steve Carell comedy of 2004 that introduced the world to the oh-so-mentally-challenged news anchor, Ron Burgundy.  The silliness of that one, set in San Diego in the 1970s, has become a major cog in the Ferrell fandom.

Again co-written by Ferrell and Adam McKay and directed by McKay, the sequel brings Burgundy and his news team to New York City and the first 24-hour news channel. Christina Applegate and Kirsten Wiig also star, and the film is packed with appearances by big names such as Vince Vaughn, Liam Neeson and Harrison Ford, and other cameos that you are sure to note.

The trailer promises slapstick, stupidity, tension between the wacky news team and everybody else in the world, and more.

In “Saving Mr. Banks,” Walt Disney fans will find out what it was like for the head of the big studio in the days leading up to the release of “Mary Poppins.” Tom Hanks plays Disney, and Emma Thompson portrays Poppins’ author P.L. Travers. Disney and Travers did not exactly get along, as the writer feared what his studio would do to her novel about the magical nanny.

The trailer displays a wide-eyed Walt and a wary Travers parrying for the soul of the story. Kelly Marcel and Sue Smith wrote the screenplay—with more literary license than a true biopic, scream some of the early reviews—and John Lee Hancock directs.

“American Hustle” features good guys, bad guys and politicians. Written by Eric Singer and David O. Russell and directed by Russell, the story studies the New Jersey underworld through the eyes of a con man and an FBI agent. The fast-paced trailer makes you wonder if the good guys are totally bad and the bad guys are kind of good.

Bradley Cooper stars as agent Richie DiMaso, Christian Bale is con man Irving Rosenfeld and Amy Adams and Jennifer Lawrence play their wives. Jeremy Renner is the mayor who might be caught in the middle.

The animated film world goes back in time with “Walking with Dinosaurs.” Written by John Collee and directed by Barry Cook and Neil Nightingale, it’s adapted from the six-part BBC series and traveling show of the same name. The story follows underdog dinosaur Patchi, who is voiced Justin Long. A parrot, voiced by John Leguizamo, narrates the action. The 3-D film should be filled with thrilling, large-scale effects to mesmerize the adults and wow the kids.

Bollywood drama “Dhoom 3” brings characters Jai Dixit and Ali Akbar back for more action and drama. Aamir Khan and Katrina Kalif star, with the story set in a circus that’s attracted thieves. “Dhoom 3” has the honor of being the first Indian film released in the IMAX format.

J.R.R. Tolkien’s fantasy world took top honors at the box office the weekend of Dec. 14. “The Hobbit: The Desolation of Smaug” grossed $73.64 million in its opening weekend, according to boxofficemojo.com.

The second part of the trilogy that will be the prequel to smash hit “Lord of the Rings” easily outpaced the No. 2 film, the animated “Frozen,” which came in at $22.56 million. The Ice Age story has climbed to a total of $164.77 million.

The other major opener stood at No. 3. “Tyler Perry’s A Madea Christmas” made America laugh to the tune of a cool $16 million gross.