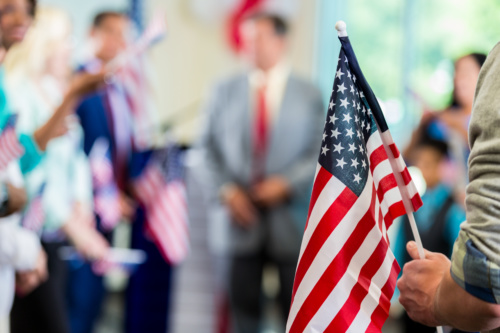 I would never refuse to stand for the national anthem or the Pledge of Allegiance. Not just because it’s drilled into my brain after doing it every day for 13 years in school, but because I believe it’s the right thing to do.

As someone who works in the news business, I’m often exposed to a lot of what goes on in other parts of the world. So I always consider myself extremely lucky to call myself an American citizen.

I am so lucky because of the millions of men and women throughout this nation’s history who have fought and died to preserve the many fundamental freedoms we enjoy every day as Americans. If anyone is lying six feet underground because they defended those freedoms, the very least I can do for them is to get on my feet for a brief moment prior to a concert or sporting event.

But there’s a difference between what is right, and what is a right.

There are a lot of sports non-enthusiasts like me who probably didn’t know about Colin Kaepernick. The now-former San Francisco 49ers quarterback made national headlines in September 2016 by refusing to stand during the national anthem, as a means to protest racism and police brutality in American society.

Kaepernick’s action was repeated by several National Football League players last fall, following comments by President Donald Trump: “Wouldn’t you love to see some of these NFL owners, when somebody disrespects our flag, to say, ‘Get that son of a bitch off the field right now. Out. He’s fired! He’s fired!’”

In protest, last season’s first NFL game in London began with players from the Baltimore Ravens and Jacksonville Jaguars kneeling during the anthem, as did players in other games in the days and weeks that followed.

Those protests re-sparked the debate fueled by Kaepernick over whether such a departure from our customary patriotic gestures somehow makes those who do it unpatriotic. Well, I don’t see any debate now.

Although I would never refuse to stand for “The Star-Spangled Banner” or kneel in sight of the red, white and blue, that doesn’t make me any more patriotic or any more American than Colin Kaepernick.

There are those who don’t think that way. The NFL announced last week that it had passed a revised policy that mandates players and team personnel present on the sidelines of a game “stand and show respect for the flag and the anthem.”

The new policy allows players who don’t wish to stand to remain in the locker room. The league also has the power to fine any franchise that has representatives who do not stand or “show respect” and could even fine the players themselves.

There are a lot of factors that go into this controversy, such as the NFL’s TV ratings. But the command to respect these American symbols is ironically a symbol itself of exactly what America isn’t.

Flags, songs and pledges are great symbols for us to show our Americanism. But we are not defined by them.

In North Korea, every home, office, school and public place is required to have portraits of the regime’s former leaders, Kim Jong — il and Kim Il — hung. These portraits must hang from a wall with nothing else on it and must be in the most prominent spot in the room. Citizens are also required to clean and dust those portraits every few days, or else risk heavy fines or worse.

Imagine if people in the United States could be punished for not hanging a flag in front of our house or fined for forgetting we have a hat on when we hear, “Oh say, can you see.” That’s what is happening to football players thanks to the new NFL policy.

Am I comparing ourselves to North Korea? Of course not. One set of rules is set by a government that operates as a military dictatorship and the other is set by a handful of owners in charge of a single sport.

But the foundational down-to-the-bottom principle is the same: You, as an individual, are required to respect the symbols of a country that you believe isn’t a perfect union and can be changed for the better. You, a person endowed by your creator with certain inalienable rights, are not allowed to disagree.

That doesn’t sound very American to me.