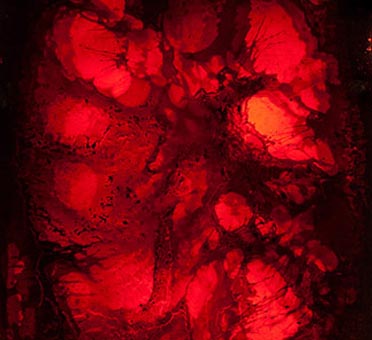 Video games, and blood at the Everson Museum of Art.

Are interactive, networked video games the greatest thing since the discovery of fire? Would Beethoven be working with them if he were alive today? Those are just a couple of the questions posed by a video
Exhibition currently at the Everson Museum of Art.

Consisting of of 3 parts, there are video interviews with important creators, programmers and designers; displays of key games that played a major role in moving various elements of video games to a higher level; and an exhibition of games representing the forty years of video game history. The exhibition has something for game lovers, the casual player and the video game novice (me). You can watch video and listen to audio explaining different games’ characteristics and how they represented a step forward in video gaming. You can also play with 5 games, one from each of the 5 video game eras that illustrate the development of the games over time.

The earliest games in the exhibition show us how both creators and players had to use imagination and ingenuity to suggest and imagine activities existing technology couldn’t accurately show at that time (such as lifelike figures, 3D perspective or guided missiles to richly colored accurate landscapes). The latest ones immerse the player in an alternate universe.

The diversity and growing richness of the games, as well as their development over time are illustrated with video and audio explanations of games including: Pac-man, Donkey Kong, Tron, Combat, Donkey Kong, Flower, Metroid 2, Minecraft,World of Witchcraft and others. There are 80 games in all.

One aspect of the exhibition that is not officially displayed is how it links generations of families. While I was there, I overheard parents explaining to their children how to play the older games and how it was back in the day when they got involved with them.

While I’m skeptical of the thought expressed by one of the creators in a video interview that the games might make us better people in the real world, I wholeheartedly endorse the sentiment expressed by the curator, Chris Melissinos that after going through the exhibit visitors would look at video games differently. I certainly did. I was even willing to accept his suggestion that they may be a new form of art.

So after being engulfed in this multi-sensual world of the video games, I decided I needed to focus on just one sense: the visual. I strolled over to a room housing 19th and 20th century representational art. As I moved through the room, one piece of art, the “Scarab Vase” by Adelaide Alsop Robineau, struck me particularly with its beauty and grace.

Next stop, selections from 1950-1975 abstract paintings in the permanent collection. A small Jackson Pollock (yes, they do exist) with a red background reminiscent of Matisse’s red. That was the only thing about it reminiscent of Matisse. But it is an arresting work, as were other abstract compositions, including two by Robert Motherwell and Al Herd.

Ready for a pause, I took a break, noting in passing the beautiful forms of the yellow, blue, and beige of the Glidden Pottery and resolved to visit them and the ceramics exhibit in the basement on my next visit.

My final stop, the “Red Giant”, is a display of works by Jordan Eagles. Using blood from a slaughterhouse captured in plexiglass and UV resin, the artist intends to reference both internal human organs and events in the heavens, from galactic explosions to storms and meteors. For me the effect was unsettling but magnetic. I couldn’t look away. The tones were intense, the patterns haunting. I left the museum resolved to return and thinking about the relationship between emotional connection, storytelling and art and how video games fit into all that. I had no answers, but a lot to reflect on.

For a schedule of exhibits, visit the EVERSON MUSEUM website.

Nina Housman is a writer, editor and trainer. Email her at nbhousman@gmail.com