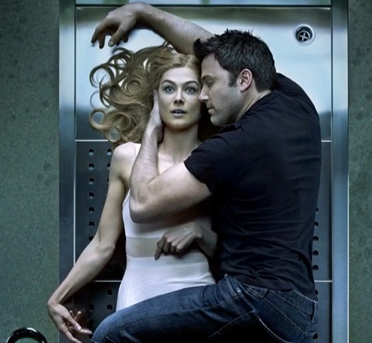 Everybody has some sort of fail-safe short list of trust, I’d assume, people you’ve accumulated over the course of your life will be there for you no matter how dire things may seem, folks you know won’t do anything to cause you harm, loved ones who’d never, ever lie to you.

Well, now, not so fast, says writer Gillian Flynn in the suspenseful world she’s built for Nick and Amy Dunne in Gone Girl, her 2012 novel of much acclaim that’s been adapted for the big screen with Flynn as screenwriter.

I had not read the book before catching the thriller early Saturday evening in a packed RPX Theater at Destiny USA. (That’s short for Regal Premium Experience, by the way, what the chain has decided to call its version of a big, slightly curved screen and pumped-up sound in a humongous stadium setting, for which they jack up the price by $5.) My dear wife Karen had read it. And yet we both twisted and turned in the comfortable seats when director David Fincher wanted us to during the 149 minutes of mystery and masterful human manipulation.

At the start, Nick and Amy are two young adults who meet at a New York City party and fall, hard. He takes her to his favorite wee-hour spot to watch a sugar delivery to a bakery, touches his finger to her lips as the granules sparkle in the great night lighting, just before their first kiss.

He’s a writer for a men’s magazine, she wrote quizzes for magazines, and her entire life was co-opted – with twists – by her author parents for their “Amazing Amy” books. He proposes to her at their book party for an installment about Amazing Amy’s impending wedding.

Life is fairytale awesome for years, until Nick and Amy both get laid off and move to Missouri when his mom is dying from cancer, and Nick opens a bar with his twin sister Margo.

That’s where they don’t seem to be themselves anymore. And then one morning, Amy disappears. Girl, gone. Cops, arrive. Nick, in deeper and deeper.

The tale is told in bursts of interrupted narration, alternating flashbacks from Nick’s viewpoint and Amy’s viewpoint.

Ben Affleck and Rosamund Pike are both tremendous in the complex star roles. They’re great as the smug New Yorkers building a life of happy love. But they’re even better as the liars, the cheaters, the unsettling sort of adults who do the kinds of things nobody expects and everybody turns to their partner and says, “Where did that come from?”

Flynn’s story puts a spotlight on America’s fascination with media stories that won’t go away, as well as the determined anchors who take advantage of our morbid fascination with missing spouses and worse, the on-camera stars who won’t hesitate to convict somebody before their day in court to keep those ratings up.

The supporting cast keeps the plot humming, too. Carrie Coon shows great pain trying to understand what her twin is going through while gnashing her teeth about what he’s up to. Kim Dickens and Patrick Fugit spar convincingly as the small town police trying to get to the bottom of Amy’s disappearance. Neil Patrick Harris carries a high creep factor as a former suitor who never gave up the chase. And Tyler Perry is one cool customer as the high-priced attorney who gladly takes on the case as it slaloms down the hill.

But at the core is the push and pull between Affleck and Pike as Ben and Amy, two people who rather nimbly yet coarsely navigate the territory of how much can you take and how much do you give?

To say more would really be a spoiler.