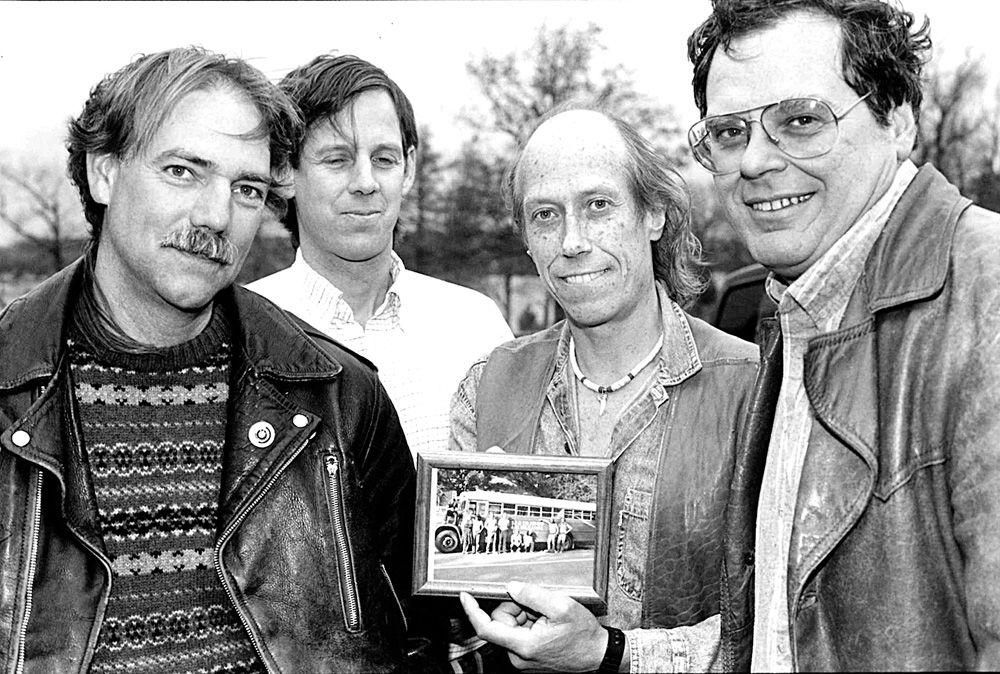 As if it was really necessary, Harvest was rehearsing, going over the starts and stops, syncopations, twining guitar leads, beginnings and endings, and the general order of a timeworn set list that has been accumulating since the summer when Richard Nixon resigned.

First up was “Rollin’ Down the Road,” a boogie-shuffle that as much as anything characterizes a veteran rock outfit that thinks of itself, with genuine appropriation, as the “original upstate outlaws.” All of this was in preparation for a show that began as an impromptu Halloween party in a barn outside Cazenovia in 1975.

Forty years down the road, the event known as the Harvest Ball, or a facsimile officially (and enigmatically) described as the “Harvest Reunion 2015: So What!” by guitarist-pedal steel player Jay Coretti, reappeared at Critz Farms outside Cazenovia on Saturday, Nov. 28, not far from the original site.

If Harvest has successfully eluded the attention of the Central New York rock scene, it has thrived over these years by building a dedicated, cult-worthy following by living in the rural outback “south of Route 20,” according to keyboardist-saxophonist Tom Link.

This legacy has included back road venues such as Slabsides Inn in Erieville, the Ozark Inn in Delphi Falls, Mystic Mountain (a.k.a. Fairbanks Ridge) Ski Center in New Woodstock, Owagena Manor in Cazenovia, the Plymouth Millhouse in Plymouth — all of which are long defunct — as well as the Georgetown Inn and the Whitetail outside Chittenango, and in various other barns.

One of those barns, the home of an arcane collection of cultural esoterica belonging to Link, hosted a celebration of Coretti’s 70th birthday last April. That event offered Harvest a chance to reunite and plan its first public appearance since 2005, the previous Harvest Ball.

Looking back on that record, bassist, vocalist and bandleader Dennis McGuire exuded a refreshed passion for what the Harvest Ball had become over the years: a seasonal rite of both passage and predictability, usually on Halloween or thereabouts, where a reliable throng of regulars gather to connect with a shared passion for an altered, un-self-conscious form of self-expression.

Understandably, this kind of generational event could easily slip permanently into the realm of inflated nostalgia, but not this time. With the enthusiastic support of Critz Farms, a venue better known for selling pumpkins and Christmas trees, the reunion/ball notion lurched forward, with information posted on social media and ducats for sale on the brownpapertickets.com website.

The entire allotment of 150 tickets (at $12 a piece) was sold out in 19 hours. Moreover, it was obvious that the demand actually exceeded that and left “a lot of people disappointed,” according to McGuire.

The event itself was both a flashback and a flash-forward, a reconvening of a constituency that had faded into the hills and then, upon command, seeped back out, a vibrant matrix of dormant enthusiasm for the tried and the true that needed only the slightest spark to reignite it.

It was a night of rockin’ blues, boogie and shuffle, with a dance beat to all of it, with a repertoire as familiar and as comfortable as an old flannel shirt. Music from Commander Cody, The Doors, The Beatles and Marshall Tucker commingled with the Allman Brothers, the Grateful Dead, Stevie Ray Vaughan and The Band.

Guitarists Steve Davies and Todd Fitzsimmons traded sinuous leads, gray hair spilled from do-rags, the capacity crowd bucked and swayed, hooting and yelping as if each old favorite had ended too soon, as if it was all brand new. Time, for a while anyway, had surrendered to its past.

This wasn’t lost on drummer Owens who, like all but Fitzsimmons, is an alumnus of the original Harvest Ball. “These people needed this, they needed to do what they did,” he observed later.

And the future? “This was a flash,” Owens said. “There are currently no concrete plans for another installment.” But who knows? After all, the Harvest Ball has been pronounced dead before. Long live the Harvest Ball!