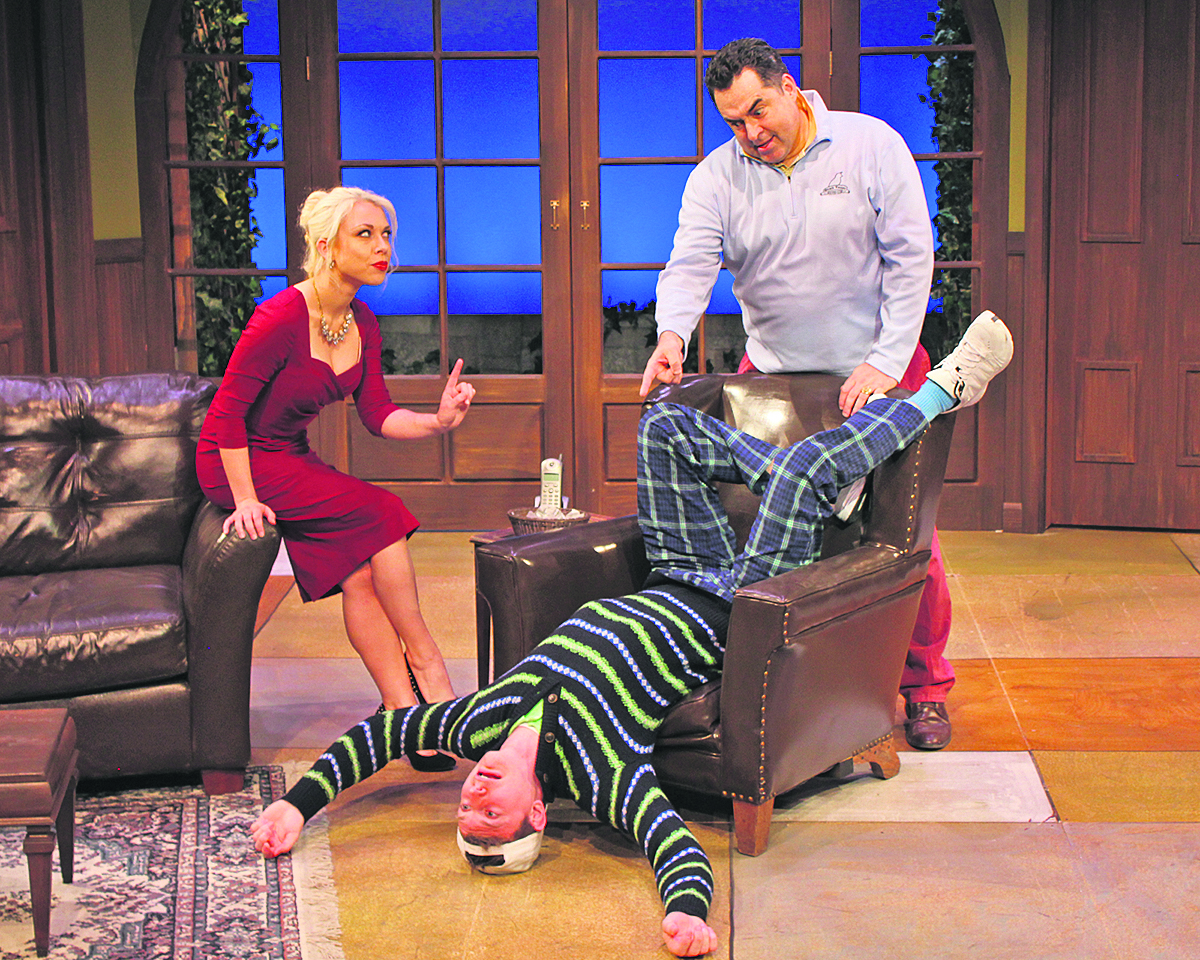 Cortland Repertory Theatre’s production of Ken Ludwig’s “The Fox on the Fairway” is a fesity and ferocious season opener.

Many audiences may never have heard of Ken Ludwig’s The Fox on the Fairway, but they know what they are buying into with this season opener at Cortland Repertory Theatre, running through Saturday, June 18.

Artistic director Kerby Thompson has been launching his summer slates with fast-paced farces for quite some time, even though it’s like serving dessert as the first course. And he’s tapped his go-to director Bert Bernardi to crack the whip and keep the cast caroming along at frantic speed. Also back for more is Michael Schaefer, a veteran actor who knows how to turn the anxiety of any authority figure into a comic mudpie.

Playwright Ludwig is the most successful author of American stage farces of the last generation, with Lend Me a Tenor, Moon Over Buffalo and the deconstructed Hound of the Baskervilles seen at Syracuse Stage last month. Cortland Rep has taken chances on lesser-known Ludwigs before, such as the cross-dressing comedy Leading Ladies (June 2008). But Ludwig, who owes much to British comic playwrights like Ray Cooney, favors sexual vanilla over spicier flavors. Convention and authority will be teased and tickled but not subjected to pants-down humiliation as with French farce.

A prime example of how un-risqué Fairway is comes in the single most quotable line in the two hours: “Golf and sex are the only two things you can enjoy without being good at them.” There it is: G-rated naughtiness.

Despite the title, all the action takes place indoors, in a brightly lighted, paneled tap room of the Quail Valley Country Club somewhere in the eastern United States. Scenic designer Ola Kraszpulska suggests the economic and social confidence of the well-to-do, even though some well-laid plans are about to fly apart. Tension begins when club president Henry Bingham (Michael Schaefer) enters into a foolhardy wager with hated rival Dickie Bell (Justin Klose), only his star pro has defected to the enemy and he has to rely on a newly hired hand, Justin Hicks (Dan Wilt).

Dickie never earns a shred of audience sympathy through guilt by gaucheries. Costumer Jimmy Johansmeyer has contrived to dress the rival in surreally hideous sweaters and loud pants, each outfit raising the bar of outrageousness. Equally lame, Dickie’s idea of humor is to mangle proverbs, although Ludwig could have leveled the contest by giving him some better material.

For a while Fairway looks like a replay of Lend Me a Tenor, where young go-getter Justin saves the day for the old man, but Ludwig already did that. So Justin falls in love with Louise Heindbedder (Tayler Beth Anderson), then suffers a malady previously unknown to characters in farce: When things go wrong, he just falls to pieces. Thus when careless Louise flushes Justin’s engagement ring down the toilet, he’s out of the competition.

Not mentioned yet are two women, whose full connection to the plot features surprise twists. One is voluptuous blonde Pamela Peabody (Charlie Jhaye), the country club’s vice president. She had been married to the hated Dickie, and there’s something in her suggestive presence that she might be a bit more than Bingham’s business associate. Jhaye’s skill in delivering well-timed gag lines certainly justifies her character’s existence, until the plot supplies a better hook for her.

The remaining woman is Henry Bingham’s wife Muriel (Nancy Kane), who is understandably furious because husband Henry has included her antiques shop in the harebrained wager with Dickie. While all the characters are variations of familiar types, the plus-size battle-ax wife is the most shameless cliché. Yet actress Kane, who might be one of the youngest members of the cast, refuses to take the easy way out and turns this zircon of a role into quite a sparkling gem.

Most of the responsibility for keeping this kite up in the air goes to veterans Michael Schaefer and Tayler Beth Anderson. Not only is Schaeffer’s timing perfect, but he’s an enabler, a straight man who buffets others’ comic jabs. Anderson, fondly remembered from Cortland Rep’s 2014 Boeing Boeing, plumbs the possibilities of Louise’s earnestness, not unlike Progressive Insurance’s Flo. Fairway may not be first-rate Ludwig, but this speedy production triumphs over the material.