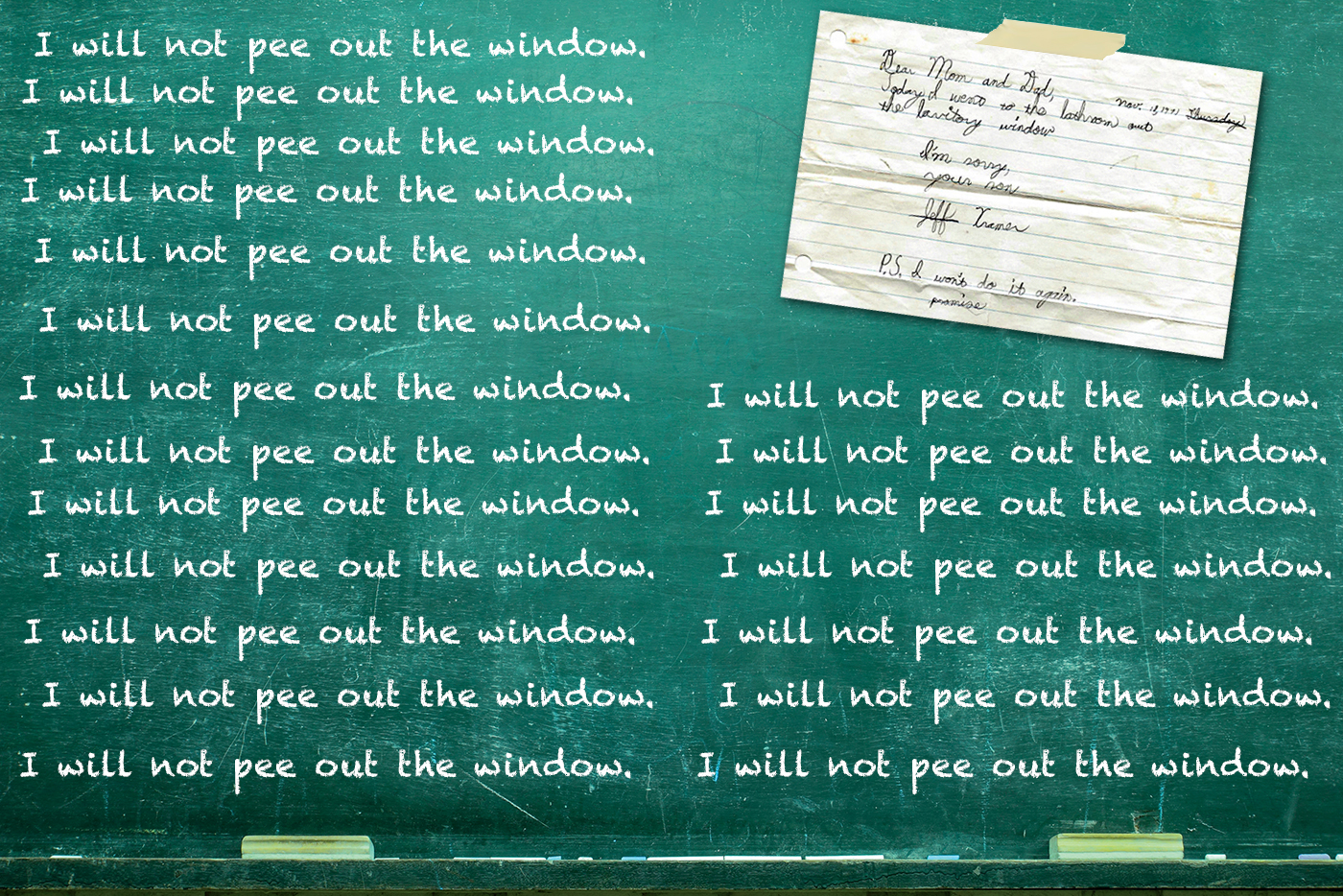 Even as a youth, Jeff was a regular whiz kid.

In a flash, 45 years vanish. I’m right back in the principal’s office. I’m busted.

“Take your coat off,” says Mrs. Zerrillo, the principal at Tecumseh Elementary School in DeWitt. “You won’t be going out for recess.”

She gestures for me to sit in a tiny wooden chair of shame and explain myself. The fact that both my daughters attended Tecumseh buys me nothing but added humiliation. The unspoken question in the room: How could the father of two lovely, young girls have done … this? I’m so scared I need to pee, which, ironically, is how this whole matter began back in 1971.

A month ago my mom fell ill, and I found myself with the sad, thankless task of clearing out her apartment in Seattle. While sifting through the piles of artifacts, photos, letters, holiday cards and on and on, I came across the chilling document shown here, written under duress when I was a fourth-grader at Seattle’s now-closed Lake City Elementary. Jeff Kramer’s original letter to his parents from 1971. (Click to enlarge.)

Today I went to the bathroom out the lavitory (cq) window. I’m sorry,

Just so you have the complete visual, the “lavitory” was on the second floor.

Our principal in those days was Merritt Des Voigne, a dapper, bespectacled little man with a twinkle in his eye to soften an otherwise no-nonsense demeanor. He ordered me to write the letter after Boyd Wilkins, a friend, classmate and leading instigator of countless boys room aerial wizz-a-thons, walked in and found me practicing on my own.

Ever alert for opportunities to deflect attention from his own mischievous ways, Boyd affected the traumatized look of an innocent who has just witnessed a creepy clown in a trench coat mounting a goat. He promptly ratted me out to a teaching assistant. From there it was a short trip to the principal’s office. I was no stranger to that setting, but this time it felt more serious.

Once I finished the letter, Mr. Des Voigne placed it in his desk and told me he wouldn’t mail it home if I refrained from such behavior in the future. I was immensely relieved, so to speak. It’s probable that I was paddled for good measure, but as long as the letter wasn’t going home, I was happy.

Except it did go home. Two and a half years later, Mr. Des Voigne was cleaning out his desk at the end of the school year. I had just graduated from the K-6 institution and was gearing up for junior high in the Fall. On a warm June day I was hanging out in my front yard with a few friends when I heard my mom demand, “Jeff? What’s this?” The principal suggested in an accompanying note that my letter would be good for “the scrap book”

I was embarrassed and my mom was bewildered, but there’s a statute of limitations on these things, and I got on with my life. Never did I imagine that — in a foreshadowing of the Internet Age, where unseemly posts can live forever — my parents would save the letter. Yet there it was, in a faded lockbox filled with other family mementos, tucked in a white legal envelope labeled “Jeff’s bits of information.”

Perhaps I should have torn up the letter, but curiosity got the best of me and I wondered how a modern principal might handle the same transgression today. A call to 911 followed by a charge of lewd conduct and a six-month suspension? You hear stories about school administrators meting out draconian punishments for seemingly minor offenses, and you wonder.

The first few minutes of my meeting with Mrs. Zerrillo did not look promising after I showed her the letter. She listened impassively to my story, about how all the boys were doing it, how it was all Boyd’s idea and how he was a prolific second-floor wizz kid in his own right.

“What I hear so far is that you’re talking a lot about what the other student did,” she admonished. “At your age (54), I would expect you to own up to what you did.”

Then came the hammer blow: She credited Boyd for identifying inappropriate behavior and reporting it to an adult.

“I actually think he did what he was supposed to do,” Mrs. Zerrillo opined. Ouch.

The good news is that at Tecumseh at least, this wouldn’t be treated as a federal offense — as long as I was honest, owned up to my behavior and promised to make a better choice next time. (I promise!)

“You usually get a one-time pass,” the principal said.

As for Boyd, be assured that no one is enjoying the revival of this scandal more than he. We’ve stayed in touch, so I informed him I’d discovered the letter and I even sent him a photo of it. I guess I was looking for closure, maybe even an apology. I should have known better.

“I’m still shocked you made such a poor decision,” Boyd replied.

Winter Blues Blowout
Looking Back, Looking Ahead
To Top