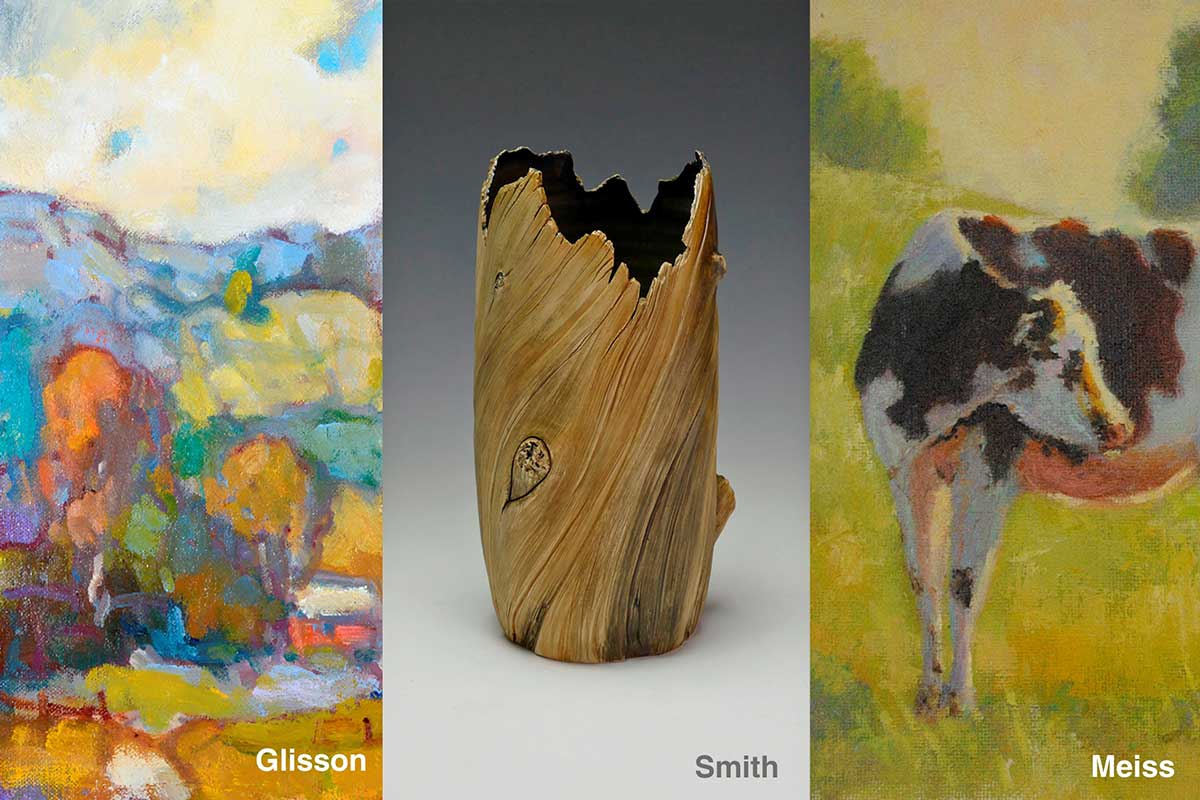 The Edgewood Gallery’s current show, Nature of Things, offers landscape paintings depicting scenes from Cape Cod and upstate New York, flowers by a house and, yes, lots of cows. It also presents ceramics suggesting wood surfaces and jewelry by an artist who makes necklaces, pendants and earrings. Most importantly, even though Edgewood is a small venue, the show offers a full selection of works by all four artists.

For starters, the exhibition provides exposure for Rob Glisson’s oil paintings. He doesn’t do straight-up figuration, preferring instead to interpret landscapes by emphasizing colors or one aspect of a subject. He often seeks to communicate an emotion or mood.

His painting of an outdoor scene in winter captures snow sticking to a tree, covering a shed, sweeping across the ground. Among other things, the work projects solitude.

“Late Day Light on Water,” meanwhile, takes a different approach as it portrays a scene in a harbor. There’s one boat with a wispy sail, a second boat with a mast, and then boats in the distance whose presence is marked only by their masts. The painting influences viewers to speculate about what’s happening in the painting’s background.

“Resurrection of Seneca Lake,” a large painting, doesn’t focus solely on that body of water. There’s certainly a lake in the artwork, but it’s accompanied by trees, sky and hillsides. Again, the painting conveys Glisson’s impression of the scene.

Karen Jean Smith has bowls, tumblers and cups in the exhibit, with the pieces all referring to wood in some manner. Smith creates tiny motifs that look like knotholes and pays close attention to the surfaces of the works. It’s easy, for example, to look at one of her tumblers and wonder if it’s really wood. Similarly, there are larger pieces suggesting a block of wood that’s been cut.

Cows, as previously mentioned, play a role in the show, in most of Adriana Meiss’ paintings. These aren’t one-dimensional portrayals. In one work, the cow’s brown-and-white colors contrast with green pastures and trees. A second painting depicts a mother and calf, communicating a sense of their connection. And a third piece references autumn time, with orange and green colors popping out and reflecting on the cows.

Meiss also has a painting, “Shady Porch,” on display, and it highlights flowers close to a house. Beyond that, it affirms that the artist isn’t fixated on cows. In the past, her paintings have depicted florals, barns and scenes from the Adirondacks and Finger Lakes regions.

Dana Stenson, the fourth artist, has displayed her jewelry at Edgewood for several months. She works with sterling silver and various stones and has indicated that she’s very much influenced by nature. She shows her work at venues such as the Plowshares Craftsfair and Peace Festival held every December at Nottingham High School, the Cornhill Arts Festival in Rochester and Buffalo’s Allentown Festival.

Nature of Things works off of its theme and does a nice job of presenting pieces by a quartet of artists. Like the vast majority of Edgewood’s exhibitions, these are all local artists.