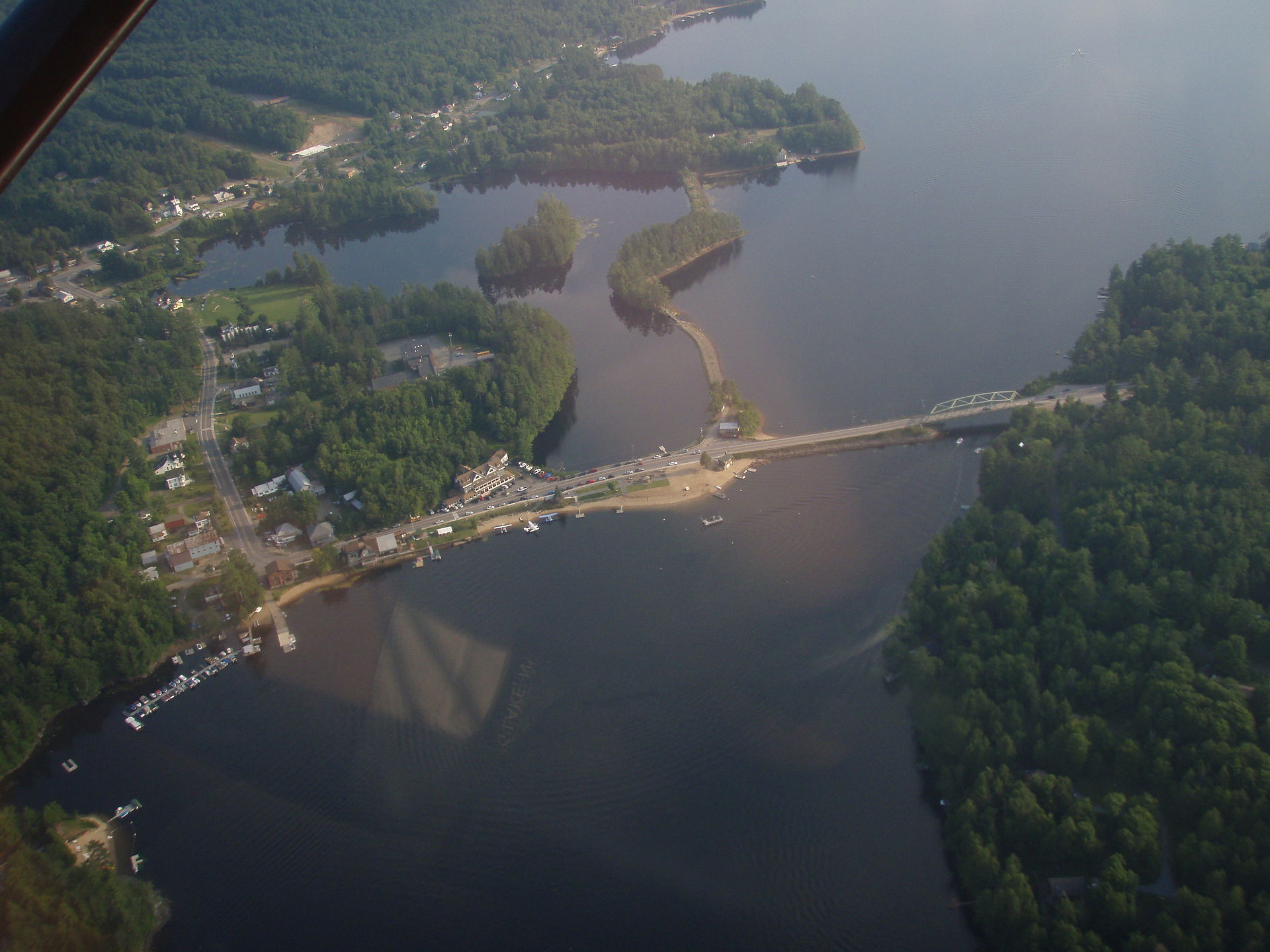 In the sparsely populated Adirondack north country of New York State, various campers and residents were treated to The Adirondack Formation of Lights.

8 August 2000, at about 10 p.m. Mabel was enjoying the clear night sky at their Adirondacks camp at Long Lake. Suddenly she saw a rectangular white light hovering in the valley between Buck Mountain and the island across from their position.

Mabel yelled to her adult son Tom to come see. Together they watched as more lights came on, hovered, went out, and then winked back on again. Mabel and her son called several local friends to come out and watch the lights.

Tom says that at one point they watched six lights wink on sequentially from left to right.  Three lights were followed by another formation of six rectangular lights. Later the lights made a “V” formation of lights, hovering silently above the tree line.

Tom says that, “After about 45 minutes of watching these lights come and go, those watching were beginning to get a bit spooked and were becoming frightened.

Meanwhile, about 16 miles to the southeast of Long Lake in an encampment on Indian Lake, another group of campers were making similar observations.

Bill tells us, “It had been dark about an hour; we were sitting around the campfire talking.”

One of Bill’s friends called the group’s attention to eight bright lights in the western sky. At first the group of campers laughed the lights off as nothing special, probably just aircraft landing lights. The thing that made everyone realize that the lights “weren’t from around here” was the odd fact that they were just hanging there in the sky. Occasionally the lights disappeared, then reappeared somewhere else in the formation of lights. Naturally, the longer the sighting went on, various folks in that viewing party began getting frightened as well.

In a comment about the brightness of the lights, one of the campers remarked that the lights were as bright as a “welding arc.”

Finally after a long while, the formation of lights seemed to be getting fainter, suggesting that perhaps they were moving further west until they faded.

Bill says he later mentioned the sighting to an uncle who lives at Indian Lake. The uncle said that many other folks around the lake had seen the formation as well. They all wondered if perhaps it was all some kind of experiment the folks at Rome Air Force base were doing.

About 65 miles to the west in another lakeside camp in Redfield, NY. , Peggy was on the back porch when she saw a string of five to nine lights flying silently in a horizontal formation. She called to her husband Frank and the two watched the formation of lights in awe.

Peggy says that some of the bright lights seemed to be a bit amber while others were reddish.

“They were flying straight toward us when all of them turned abruptly…it was if they picked up speed because suddenly the lights were gone.”

Peggy and Frank tell us: we have lived in Redfield all of our lives, in 45 years they had never seen any regional 10th Mountain Division helicopters flying at night.

Let’s look at some other recent sightings in New York Skies: 29 August 2014: at about 12:30 p.m. a Syracuse resident observed a slow moving circular object traveling in the eastern sky, then southwest and hovering.

30 August 2014: at about 8:40 p.m. a resident of North Tonawanda, NY witnessed an orange colored bright object that wasn’t blinking. He says it was fading, brightening, and changing in shape.

3 September 2014: at about 4 a.m. a Brentwood, NY resident heard a loud noise, like a helicopter, looked out a window and saw a triangular shaped craft hovering just above the tree tops. It had a few white and red lights.

3 September 2014: at about 9:30 p.m. a Clarence, NY motorist observed red and yellowish/white lights, two on each side of the middle point that blinked in a radiating pattern outward toward sides. The object passed diagonally at a 45-degree angle from one side of road and was obscured by trees on left side of road.

5 September 2014: at about 11 p.m. a resident of Lackawanna, NY witnessed “big craft” flashing and hovering above the woods. It suddenly went upward at tremendous speed, “it was big!”

7 September 2014: at about 4:30 p.m. a resident of Lisbon, NY, saw a reddish object flying above the tree tops that made no noise. All the local dogs were going nuts! The object suddenly changed direction and vanished.

If you have a UFO sighting to report, you can use either one of the two national database services: www.NUFORC.ORG or www.MUFON.COM – Both services respect confidentiality.

The Espresso Shot (#020)
A Mansion of Possibility
To Top