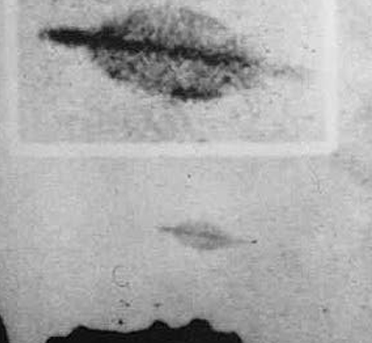 A month doesn’t go by that someone contacts me and pronounces that UFOs are hogwash and simply some sort of mass hysteria or urban legend propagated since about 1940s. These individuals usually go to great verbose lengths to assure me that UFOs sightings are a recent occurrence over the past seventy years or so.

Ever since I started writing this column, many people have come forward and shared their personal UFO account with me and in some cases those of deceased family members. What I find amazing is that some of these stories seem to be handed down generation after generation like a family heirloom. Last week I shared the sworn 18th century account of a German settler in colonial New York and what he witnessed in 1790; that article drew great interest from readers.

For instance, on November 13th, 1833 a large luminous square object appeared over Niagara Falls. It’s reported to have hovered there over an hour and was seen by people on the Canadian and American sides of the falls. When it eventually began to move it’s said that it seemed to do an aerial tour of the City of Buffalo.

In August of 1860, two great balls of fire were observed streaking across evening sky by Albany, Hudson Valley, and New York City residents. The unique thing about this sighting was the commentary by period journalists that the objects appeared to be moving too slow to be meteors.

In March of 1861, a woman in a notorious area of New York City called Five Points observed what appeared to be a flaming cross in the sky at about midnight. A modern researcher has determined that a few blocks away was a huge city block sized fire. The conclusion was that the appearance of a flaming cross was the reflection of the great fire on the hull of some form of airborne craft. A metal craft in the New York sky, 42 years before Wright Brothers flew their wood and fabric airplane in 1903.

In April 1879, several New York and New Jersey astronomers observed a huge object hovering at about 100 miles above New York Harbor for over 24 hours. The size of the Mothership like object was estimated to have been about a mile in diameter.

In the April of 1880 in Cameron, NY, some rural school children came upon some tiny men next to a bridge over a creek that they had to cross on their way to their country school house. The children said that the tiny men had shiny tight clothing and had long spinally fingers. The sight of the creatures frightened the children enough to run back to their farm homes.

Another sighting event in April of 1880, an astronomer in Rochester observed what he thought was a comet in the constellation of Ursa Major. The comet should have appeared later when some brief cloudy weather cleared but the object was no longer seen in the sky by the astronomer.

Finally, on July 3rd, 1884 a large, high altitude sphere shaped object was seen by many residents of Norwood, NY in the St. Lawrence region of New York. The object was described as being a sphere with a ring around its mid-section, many say it looked Saturn shaped.

23 November 2014: at about 9 p.m. a Waterloo, NY resident witnessed an extremely bright white, large, stationary light in western sky; it had no flashing or movement.

24 November 2014: at about 11:30 p.m. a Rochester, NY resident observed a very bright object “shoot” across the sky at about 20 degrees above the horizon.

26 November 2014: at about 4:30 a.m. a Brooklyn, NY resident on his way to work saw a large object not moving like a conventional aircraft. He states that it had white and blue flashing lights.

3 December 2014: at about 10 p.m. a family in Stony Point, NY observed a “V” shaped formation of bright objects flying east to west before losing sight of them in the clouds.

The feature photo was taken in Brazil in the 1950s, but it similar to the one seen in Norwood NY in 1884