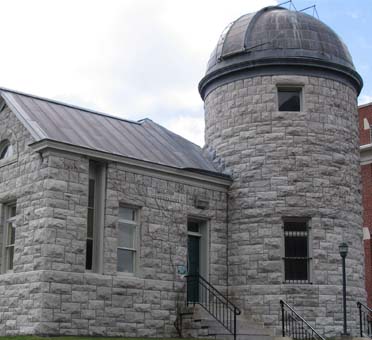 It was a crystal clear winter’s night on 20 February 1947, five months before the huge worldwide 1947 UFO wave and the famed Roswell flying saucer crash. It was about 10:15 p.m. on the campus of Syracuse University, class mates Leo and Dirk who were out walking. When they noticed that the dome doors on the campus’s Holden Observatory were open. As they passed the small building they noted that entrance door was also open. Curiosity got the better of the two and they wandered into the ground floor.

Suspended about 12 feet above the floor was a 6 or 7 foot long refracting telescope. A man using the telescope was walking it back and forth rapidly the length of the dome opening. When the lads began to climb the platform the astronomer noticed them and remarked, “Thank God you guys are here. Come and look and tell me I’m not crazy!“

The man explained to the two students that he’d been seeing something strange in the night sky. He asked the young men to take a look, not telling them what he’d been watching. Leo being a kid from New York City had never in his life seen the stars like he could on campus, especially as he watched through the telescope, totally in awe of the bright star field. As he gazed he saw a light pass his view high in the sky, then after 20 or 30 seconds he saw several more, until he counted about twelve. Puzzled he handed the telescope over to his pal Dirk. After a few minutes Dirk looked as puzzled as Leo and the astronomer. The three men compared their notes and the facts were that all three of them had been seeing the same objects.

For through the telescope they each had seen an unending stream of elliptical or circular objects crossing the heavens, blocking out the stars as they passed at a high rate of speed. The detail of these objects could only be seen through the telescope. They appeared to have a grayish bottom surface, slightly lighter than the night sky background; each object had a thin bright yellow orange trailing edge which seemed to ripple slightly. All three of the men noted that some of the objects were brighter than others. All three of them were at a loss for ideas of what they were seeing. The astronomer assured the lads that he’d never seen anything like it.

The astronomer released the telescope so it could move freely at which time each of them could do another observation from the Zenith high above them down to the horizon. They each noted that the objects took between 15-20 seconds to travel from Zenith to the Horizon.

While the two young men had on winter clothes, they certainly weren’t dressed for a long period in an icy cold observatory so they bid the astronomer a good night and left for the warmth of their dorm rooms.

Leo states that they never met the astronomer again. He does say that he and Dirk have discussed the events of that evening a number of times over the years. (Leo and Dirk are not their real names)

Mid-winter UFO sightings here in New York are a bit scant so let’s take a look at some under reported retro sightings:

1 Feb. 2004 at about 1:00 a.m. a New York City resident was outside for a cigarette. He and his wife were talking when they noticed a small red star moving very rapidly across the sky. Moments later they saw 10-15 more of the red lights following the first and heading toward the northeast. The couple reports that their general reaction was, “What the hell is going on, those are not airplanes!”

1 Feb. 2004 at about 5:00 p.m. an adult motorist was driving on the Taconic Parkway to a local college for class.  Suddenly the motorist saw a bright white oval object hovering near the tree line. The object began moving towards the highway at a fairly slow speed until it came to a point of being directly over his car. As the bright object passed overhead it was reported to be silent.

6 Apr. 2004 at about 3 p.m. a Brooklyn resident observed a “toy-like object just below a row of houses.” He describes the object as low to the ground. It was pyramid-shaped metallic object that began turning, as it started to rotate he says that the object began ascending into the sky. The spinning object disappeared through the clouds in less than a minute and was no longer seen.

1 May 2004 at about 1:14 a.m. a Pleasantville resident observed a fast moving bright object that abruptly stopped then suddenly began moving again at great speed.

12 May 2004 at about 9:40 p.m. a Poughkeepsie man was driving on State Route 9 heading north. He had just taken the Academy St. Exit when he saw red and green lights hovering. He describes the object as boomerang shaped, just floating silently above the highway.  The motorist tried to park his car for a closer look but the object vanished in the meantime.

28 June 2004 at about 2 a.m. a pair of young lovers were parked near the golf course in Coram. They were enjoying the night sky and pointing out constellations like the Big Dipper and the Little Dipper. Then they saw a moving star, upon a closer look they noted other moving bright objects. The objects had white, red and green lights and seemed to dart around. The objects just disappeared.